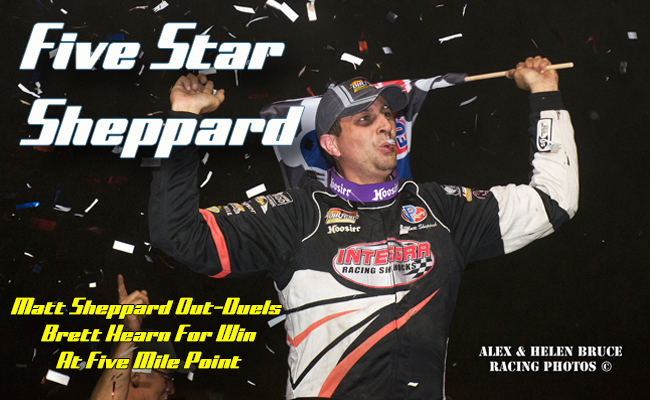 KIRKWOOD, NY – June 11, 2017 – Matt Sheppard took the lead from Tyler Siri on lap 16 and then held off polesitter Brett Hearn throughout a flurry of late-race restarts to win the Modified 67 at Five Mile Point Speedway on Sunday night. The Waterloo, NY native had to be strong in all aspects of the race as he raced from the sixth starting position to overtake Siri and never looked back despite Hearn’s numerous attempts to take over the top spot.

“This thing was spot on right from the drop of the green,” Sheppard said in Victory Lane. “I could just drive it straight around the racetrack like I was on the highway. It was just great from lap one. I didn’t really like seeing all those caution, but just tried to kept it straight and luckily kept enough tire and brought it back to Victory Lane.”

Sheppard’s first win this season was also the 48th of his career with the Super DIRTcar Series and it was one he had to earn. Jimmy Phelps completed the podium behind Hearn.

“It feels great,” Sheppard said. “We had that record-breaking season last year where it seemed like we were winning everywhere. We had a couple of good runs (to start the year), but it’s definitely nice to get the first series win of the season. Hopefully we can keep rolling from here.”

Hearn and Siri started on the front row for the 67-lap main event. Siri used the outside lane to lead the opening circuit by a bumper before clearing Hearn for the top spot.

The top four cars – Siri, Hearn, Sheppard and Stewart Friesen – raced nose-to-tail and side-by-side throughout the first 15 laps without any driver able to distance themselves. It led to a three-wide battle for the lead off corner two on lap 14 before Sheppard took the inside lane from Siri and wrestled the point position away on lap 16.

Sheppard caught lapped traffic on lap 21 with Hearn lurking closely behind, but was saved from dealing with the slower cars by the second caution of the race on the same lap. Friesen used the ensuing restart to dart past Hearn and Siri for second, which allowed Sheppard to open a five car-length advantage while the battled raged on behind him.

Just as Sheppard caught traffic again on lap 31, a caution flag waved for a stopped Mike Mahaney in turn four. Sheppard made the most of that restart and opened a 1.6-second advantage over Friesen at the halfway mark.

At lap 40, Friesen’s momentum withered as Hearn retook the second position and both Billy Decker and Phelps were able to push the No.44 to the back-end of the top-five.

With 20 laps to go, a number of drivers began to experience problems with tire wear and a series of cautions slowed the race as drivers fell off the pace with flat tires, including both Decker and Siri who were destined for top-five finishes. Sheppard, however, had no issues outrunning Hearn, even on the final restart with three laps to go. Hearn kept pace and stayed within a car length of Sheppard, but couldn’t gather enough momentum to make a serious challenge for the lead.

“I started getting a vibration in the right-rear,” Hearn said of the closing laps. “I thought we were getting a flat tire and something was going bad. It must have just been the tire wearing out. I settled into second and running just partial throttle I was able to run with him. When the track rubbered up a little bit on the bottom at the end, he was in the catbird seat.”

For Phelps, the third-place finish was his best this season and his second top-five of 2017. It was a much needed strong run for the Baldwinsville, NY pilot, who struggled in the series last race at Bridgeport Speedway.

“We could have been a little better in qualifying to give ourselves a better starting position, but other than that I thought the car was really good,” Phelps said. “By the time we got to third we were out of tire and trying to stay off of it the best we could and try to save it for the end. The car just came to life in the Feature.”

Sheppard’s win extends his point lead atop the Super DIRTcar Series standings to 41 markers over Hearn and 53 ahead of Decker. The series will be back in action for its fourth race of the season at Outlaw Speedway on Tuesday, June 20.

The night’s Pole Position Raceway Fast Qualifier was Max McLaughlin who also won the night’s first heat and finished fourth in the Feature. Keith Flach rounded out the top-five with his best finish this season.

Mahaney and Rich Scagliotta were the drivers eligible for the 811 Dig Safely New York redraw bonus if either could win from the 8th or 11th starting positions. Scagliotta finished 12th while Mahaney was 13th.