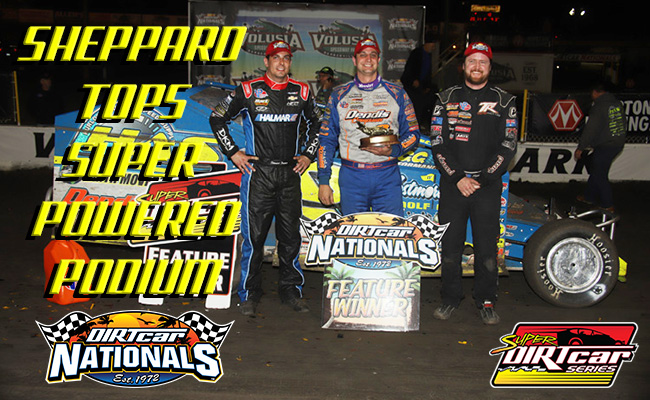 BARBERVILLE, FL – February 14, 2019 – There was love for dirt racing in the air at Volusia Speedway Park this Valentine’s Day, as a tremendous crowd watched three super-powered heroes battle it out for the top spot of the Super DIRTcar Series 30-lap Feature podium. Super Matt Sheppard, from Watertown, NY, triumphed over Mr. Freeze Stewart Friesen, and Batman Peter Britten. Sheppard made a late two-for-one pass in turn two for his first win of 2019 with a new car, a new set up, and a new engine. The 30-lap thriller featured multiple lead changes, with four different leaders including the top three and Jessey Mueller who fell back to finish sixth.

The story of the 2019 DIRTcar Nationals has been that of incredible racing on great track surfaces. Once again, Matt Sheppard proved why he is a seven-time Champion by parking the No. 9s in Victory Lane. By all accounts, this was a true racers track. “The track was so racy. We were all moving around there. Guys were running the middle, the top, the bottom. I got them on the bottom off of turn two. I think Stewie [Friesen] got messed up in lapped traffic, or he moved around to try to find a new line. I just caught him by surprise. I knew after following him for half the race how good he was, and I knew if I got out front, I couldn’t make any mistakes.”

NASCAR Gander Mountain Truck Series standout Stewart Friesen of Sprakers, NY also spoke highly of the track and the racing. His battle with Matt Sheppard is the final frames showcased the high-quality competition on hand. “It was good, I thought he [Matt Sheppard] was going to check out there. But we got rolling and got right back to him. It was a challenging race fan but a lot of fun. The track was a lot faster than last night and it had a gnarly cushion. I watched the replay from last night and saw the guys up front roll the bottom. I thought it was going to be the place to be, but then Matt came blowing by. We’ll get her cleaned up and try again Saturday,” said Friesen.

Third place finisher Peter Britten had his best finish of the week so far. He too enjoyed the racing conditions. Britten said, “The track was definitely different. When you get down here the track changes every night. You gotta roll with it pretty quickly and pick it up. So, we made some changes too and we were pretty decent. We were in the fight. Last night we thought we were pretty good right up to the start of the Feature. Then we started pushing real bad. We changed a few things to fix that. I think that helped and like I said, the track was different tonight.”

Graham Racing driver Anthony Perrego had another strong run and finished fourth. Unfortunately, his teammate Danny Johnson went for a wild ride in turn four after jumping the cushion and barrel rolling into the retraining wall. DIRTcar Nationals Big-Block Modified points leader Billy Decker in his Gypsum Racing No. 91 rounded out the top five.
Friday night we do it all again. Be sure to join us at Volusia Speedway Park for another thrilling 30-lap Feature ace. Watch as 39 Big-Block Modified drivers go head-to-head for a chance to hoist a Big Gator above their head in Victory Lane.

If you can’t make it to the race track, be sure to tune in at www.DIRTVision.com for the live broadcast.