Sheppard Lights Up at Utica-Rome 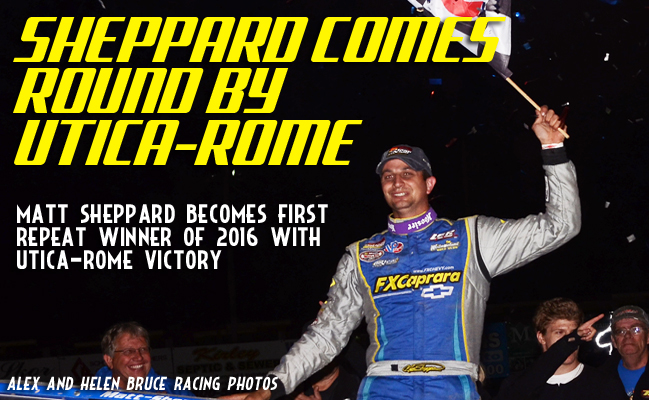 VERNON, N.Y. – July 3, 2016 – Fireworks capped off the night at Utica-Rome Speedway but the fireworks actually started early when the fierce battle between Matt Sheppard and Danny Johnson started on lap 30 of the main event.

“It just kind of seemed slow and steady. The car felt good at the drop of the green but not fantastic. We kind of road for quite a while,” said Matt Sheppard in victory lane. “It seemed the longer the race went the slicker the track got, the better the car got. The car was really good tonight. I can’t thank everybody enough.”

Johnson was joined by Rob Bellinger on the front row for the start of the race. Third starter, Pat Ward, shot out of turn two off of the bottom to wrangle the lead away from Johnson.

It was a strong battle from the start between Ward and Johnson. Johnson captured the top spot back on lap five and pulled away.

The first caution of the night was brought out on lap six due to a slow moving Frank Cozze on the front stretch. The restart saw Johnson holding the bottom as Ward worked the top groove.

Larry Wight, who started 15th was on the move, charging through the field up to seventh by lap 19.

Ward caught up to the back of the field by lap 22 which cost him the lead to Johnson.

Sheppard, who started in position number nine, passed Bellinger on the bottom coming out of turn four on lap 28 for second and then had his sights set on Johnson.

At the halfway mark the scoreboard saw Johnson leading over Sheppard, Bellinger, Danny Varin, and Ward.

Johnson held the bottom lane, Sheppard shot to the outside, slid up coming out of two as a lap car got in the way of a perfect maneuver. Contact was made on the backstretch between Johnson and Sheppard and it was Johnson who came out on top on lap 32.

That wasn’t for long. Sheppard dove back into turn one and passed Johnson back on lap 33.

“We were really good on the bottom off of one and two. We were able to stick on the bottom and maneuver through. That really helped us in lap traffic,” Sheppard said.

Wight was on the move and was up to fifth position by lap 36.

Friesen, who started in eighth, made a late race charge on the outside into fourth position on lap 45.

Friesen drove hard into turn one causing him to push up into the marbles as he was charging for the second spot. Friesen couldn’t catch it fast enough as the car went spinning over the bank causing the second yellow of the night on lap 48.

In the final restart of the night, Sheppard pulled away from the field. Varin dove down into third position as Wight charged the outside for fourth.

Johnson bolted to the bottom of Bellinger on the last lap on the backstretch and got sideways after clipping one of the inside tire barriers which sent him spinning into the infield as he was battling for fifth position.

Sheppard then cruised the FX Caprara 9s big-block modified to his second Super DIRTcar Series victory of the year by half a straightaway over Johnson, Varin, Wight, and Bellinger.

First runner-up, Johnson, was pleased with his run.

“We have a great team,” Johnson said. “To get here in second place is pretty awesome. I was losing too much momentum in three and four and it cost me. We keep throwing things at it. We missed a little bit but we keep trying to improve.”

Second runner-up, Varin, who started 11th, was proud of his Magsarus No. 93 team’s effort.

“We had a deep start and were able to come through,” Varin said. “To run in the top three when the big boys come to town is pretty good. We have a good package here and hopefully we can continue that.”

Only two cautions were brought out during the 60 lap a-main event. Thirty-five cars attempted to qualify and thirty started the field. After spinning on lap 48 Friesen drove back through the field to finish ninth in just twelve laps.

The Big Blocks return to action this Wednesday, July 6 at Albany-Saratoga and then heads north to Mohawk International Raceway on Thursday, July 7.