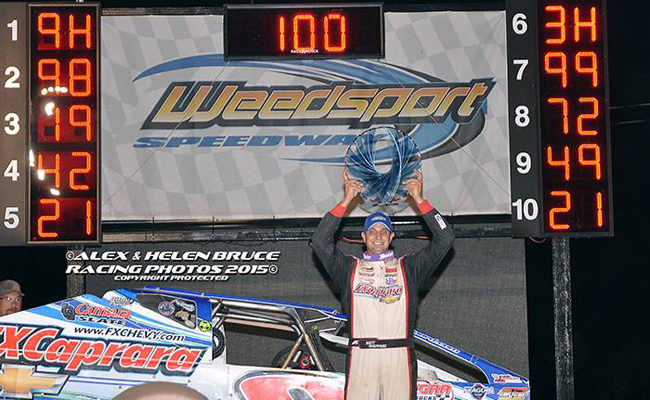 Sheppard started eighth in the FX Caprara/Mohawk Northeast No. 9h, stayed patient in the early going and passed polesitter Danny Johnson to take first place after several laps of jousting in lapped traffic.

Johnson slowed on the backstretch soon after surrendering the lead bringing out the third caution. The ensuing restart dramatically changed the complexion of the race. Billy Decker, starting on the inside of row two, had a stuck throttle and spun out in the first turn, collecting Peter Britten and Brett Hearn, who had risen from 12th to 4th and was showing signs of overtaking the leaders.

Decker left on the hook while Hearn pitted, advancing Tim Fuller and Jimmy Phelps into the second row. Sheppard drove away from teammate Jimmy Phelps at the drop of the green, never to be closely challenged again.

“We were going back and forth, sort of floating around in 6th or 7th for quite a while, but then we had a pretty long green flag run and next thing you know, there we were racing for the lead,” Sheppard said. “It’s great to win here. It’s truly one of the classiest tracks in the Northeast with a lot of tradition.”

Phelps was alongside Fuller on the restart that proved to b Decker’s undoing along with Hearn and Britten.

“I was inches away from getting into it myself,” Phelps said. “Thanks to all the fans for coming out. We had a lot of great people behind us helping put this race together.

Pat Ward finished fourth after testing Fuller often for third only to have lapped traffic cut down his angles.

Erick Rudolph got better as the race went along and drove underneath Justin Haers with four laps remaining to complete the top five.

Hearn, the Pole Position Raceway Fast Award Winner gained little of the track he lost after pitting for a tire following the Decker incident.

The next stop on the Super DIRTcar Series schedule is the ”Big Show 7”, which Hearn promotes, at Albany-Saratoga Speedway in Malta, N.Y. Wednesday, August 12.