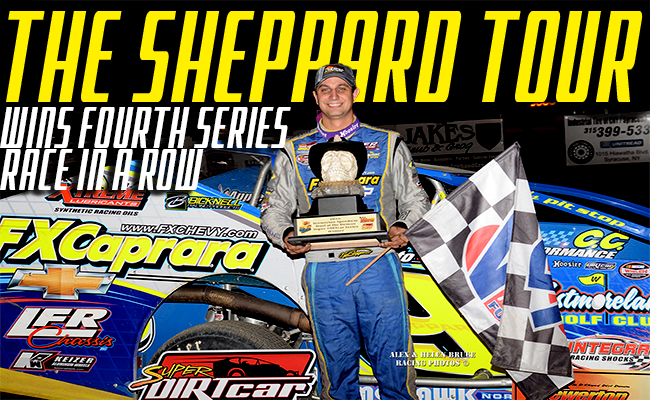 BREWERTON, N.Y. – Sept. 16, 2016 – Super Matt Sheppard… is there anymore I need to say? He is the man to beat this year as he captured his fourth Super DIRTcar Series victory in a row and his tenth of the season Friday night at Brewerton Speedway for the Duel at the Demon Modified 100 lap main event.

The driver of the FX Caprara No. 9s Big Block Modified is no stranger to victory lane this year. Counting Volusia and Eldora, each, as one event, Sheppard so far has maintained a 45.45% win percentage. That is a percentage unheard of in motorsports.

Coming from the 12th starting position, Sheppard was thrilled with his victory. “The car was so good. I wasn’t in a hurry. That’s a lot of fun when we have a racecar that good. I can’t say enough about it. It’s been huge. We had that big wreck there back in August but the month of September has been good for us. We’re seven for seven in the month of September. I can’t say enough about this car and this team. We have such a potent combination.”

The start of the Duel at the Demon 100 saw front row starters Ryan Bartlett and Stewart Friesen duke it out back and forth before the first caution of the night was brought out on lap five as Danny Johnson hit the wall hard coming out of turn four, bringing out the red flag. Danny climbed out of the car and was fine.

Billy Decker took advantage of the lap six restart as he went three wide going into turns one and two splitting the two and taking over the top spot.

Seventh place starter Tim Fuller was already knocking on Friesen’s doors by lap nine for the second spot. Fuller slid Friesen in turns three and four and took over the second spot on lap 11.

Twelfth place starter and point’s leader Sheppard was in the top five by lap 12.

Decker was working his way around the bottom as Fuller planted his car on the topside and drove by Decker for the lead on lap 15.

Larry Wight started challenging Decker on the outside as he captured second spot on lap 17.

Sheppard took over fourth spot on lap 18 from Friesen.

Fuller had five car lengths over second place runner Wight when he caught the back of the field on lap 22.

Sheppard started challenging Decker on the bottom as Decker slid up in turns three and four allowing Sheppard to sneak by on lap 24 for the third spot.

Wight was driving hard on the outside as he was battling through heavy lapped traffic allowing Sheppard to close the gap. Sheppard dove under Wight and took over the number two spot on lap 35.

Fuller was running the top side of the track as Sheppard was digging low gaining ground on Fuller. Fuller got stuck behind a lapped car as Sheppard flew by on lap 39 to take the lead and immediately started to pull away.

Sheppard led the field at the halfway mark by a straightaway over Fuller, Wight, Decker and Friesen.

Decker took advantage of the lap 75 restart as he shot to the outside of Wight and took over the second spot on lap 76.

Sheppard was in his own league as he pulled away while Wight, Friesen and Sears Jr. battled for the third spot. Sears Jr. made a late race charge, took third spot then stalked down Decker to take the second spot with one lap to go.

As Dave Farney threw the VP Racing Fuels double checkered flags, it was clear that Sheppard and his team are one lethal combination. “I told these guys after that wreck that we needed to bounce back 100%. Within a matter of three of four days we were 100%. We got back to Lebanon Valley and it showed since then we’ve been on a tear. I can’t thank everyone enough.”

Eighth place starter Tim Sears Jr. made a late race charge as he patiently waited for the right time to make his moves and finish in the runner up spot.

“As the race went on the car kept getting better and better. It kind of just fell into place. Billy, Larry and Friesen all started sliding around so I knew I was going to be pretty good I just kept saving. All of the hard work in the shop and stuff, that’s where these good runs come from. The harder you work, the better the results.”

“The Page Transportation wasn’t bad we just weren’t good enough. So we just need to grin and bear it and claw at it and salvage a finish. I wasn’t working good anywhere really. I just tried to roll and keep it straight but I didn’t do a good job at that.”

Race Notes: 41 modifieds attempted to qualify and 30 started the feature. Matt Sheppard received the Pole Position Raceway fast time award in time trials with a 14.105. There was one red on lap 5 and two yellows on lap 60 and lap 75 during the feature.

The Super DIRTcar Series will be in action at Weedsport Speedway, Saturday, Sept. 17th.