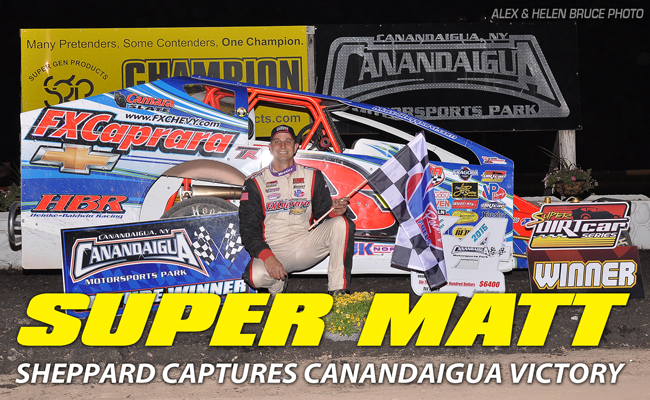 CANANDAIGUA, NY – May 20, 2015 – There was no catching Matt Sheppard after he took the lead from pole sitter Steve Paine on lap nine of the 64-lap Jan Corcoran Memorial Super DIRTcar Big-Block Modified Series event Wednesday at Canandaigua Motorsports Park.

Sheppard had sizeable leads trimmed by four cautions, but he was able to maintain control each time, including a final restart on lap 48.

Larry Wight, Sheppard’s closest pursuer, drew within four car-lengths of Sheppard’s FX Caprara No. 9h on the final lap, but had to settle for the runner-up spot. Paine was third, followed by Brett Hearn and Billy Dunn.

“This was a great race for a great lady,” Sheppard said. “I don’t know how I could have done any better. Between me and this car and this track, it’s quite a combination right now. I feel confident racing here.”

“We both had solid cars, but it’s hard to close on somebody that strong on a big track that gets slippery,” Wight said.

Wight passed Paine for second a lap after the first caution of the race for Dunn, who slowed and then pitted to replace a deflating right rear tire.

Dunn had started 25th. He raced into the top-10 on lap 42, spent several laps dicing with Billy Decker for sixth and closed in on Hearn for fourth, but couldn’t get past him.

The Super DIRTcar Big-Block Modified Series’ next stop is at Brockville Ontario Speedway Wednesday, May 27.