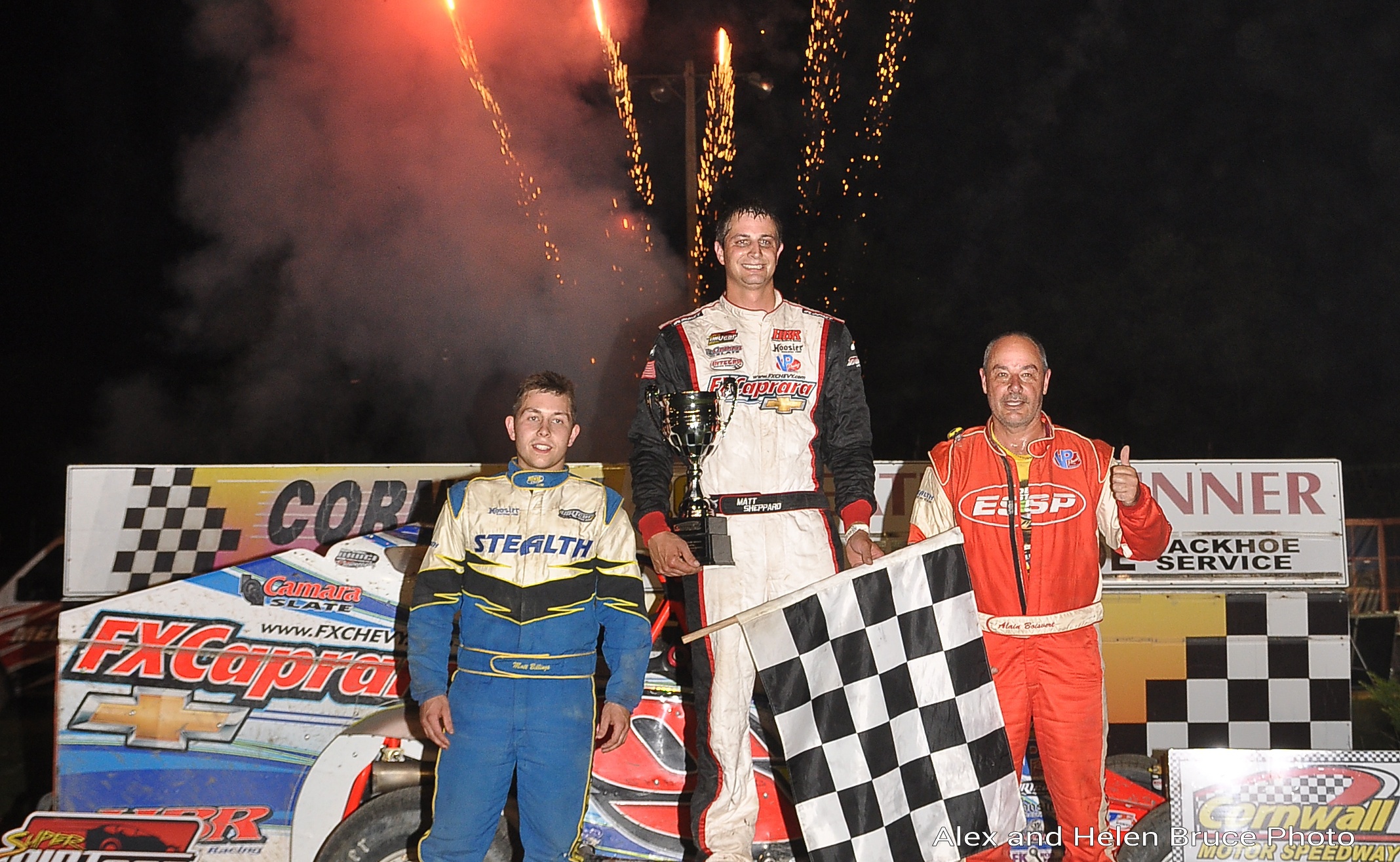 CORNWALL, ONTARIO — June 30, 2014 — He’s unstoppable; with two Super DIRTcar Series wins to his credit already this season, “Super Matt” Sheppard, of Waterloo, N.Y, is on a roll. He outdueled veteran racer Billy Decker, of Sidney, N.Y., Sunday, June 29 to claim a stunning victory at Ontario’s Cornwall Motor Speedway and solidify his point lead over Decker, eight-time series champion Brett Hearn and the many other drivers vying for the title.

“I can’t say enough about this whole team here. Man, is this thing rolling!” Sheppard said of the Heinke-Baldwin Racing FX Caprara Car Co. No. 9h. “It doesn’t seem to matter whether we’re on a quarter-mile high-banked bullring like Cornwall, or a bigger track like Canandaigua; we’ve been good everywhere we’ve been. ”

Starting tenth on the grid, Sheppard worked his way forward as Australian driver Pete Britten took the initial lead. Decker ran in second, but was quick to challenge Britten. The pair powered off a lap-14 restart, but Britten Troyer No. 21a stumbled, wandering too low on the track and falling to 11th place.

Decker led over Boisvert, and, by lap 19, Sheppard had already charged to third place. In lab 25, the Phelps Cement Products No. 3 of Justin Haers slowed to a stop on the backstretch to bring yellow flag conditions. Larry Wight brought another caution in lap 37, and on the restart Sheppard powered to second place.

Decker motored forward, but Sheppard was gaining on him. Sheppard went for the pass in lap 50, and the leaders raced side-by-side until Decker jumped too high on the cushion in turns 3 and 4 of lap 51, causing the Gypsum Wholesalers LJL Racing No. 91 to spin a the yellow flag to wave.

“He was pretty well gone for a long time, then it seemed like when we got to second we were slowly able to start catching him,” Sheppard recalled of his mid-race battle with Decker. “We were able to get a run, battled side-by-side, and we were finally able to get around him.

The three-time Super DIRTcar Series Champion sped ahead, leading over Matt Billings and Alain Boisvert. Shepherd seemed to effortlessly cruise forward, putting more and more distance between the No. 9h and the rest of the field. He struggled with lapped traffic late in the race, but the struggle didn’t slow him down.

“The lapped traffic was tough,” Sheppard said. “Everyone was running two-by-two. There wasn’t a lot of room to really go anywhere.  You had to wait for them to string out and go single-line, either high or low, so you could get by them

“That takes some patience sometimes,” he continued. “You want to get around them as fast as you can, but sometimes that just slows you down.”

Despite the challenge, Sheppard maintained his lead position through the checkered flag to claim his 30th career Super DIRTcar Series win, as well as his first-ever Big-Block Modified win at Cornwall Motor Speedway.

“It feels good to finally get this Big-Block win here,” Sheppard said. “It seems like we’ve been in the hunt a bunch of times.”

Billings,  of Brockville, Ontario,  finished second after wresting a position from Boisvert off a lap-42 restart.

“I didn’t really think the car was very good, but I think we just kept digging and kept on working,” said Billings, who has been making the haul to Central New York tracks Brewerton Speedway and Canandaigua Motorsports Park to compete against the likes of Sheppard on a weekly basis. “Running in Brewerton and Canandaigua weekly really puts you down a few pegs. But you’ve got to keep climbing high and keep trying to reach the top.”