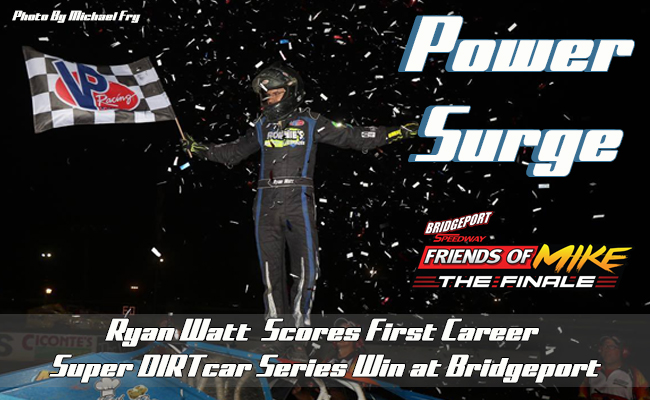 SWEDESBORO, NJ – May 17, 2017 – Ryan Watt inherited the lead when Rick Laubach suffered a flat tire on lap 10 and dominated the remaining 50 laps to earn his first career Super DIRTcar Series win in the Friends of Mike ‘The Finale’ Feature at Bridgeport Speedway on Tuesday night.

Watt, a native of Boyertown, PA and the reigning Bridgeport track champion, defended his home turf while earning the 811 Dig Safely New York redraw bonus for holding off Billy Pauch and Stewart Friesen to win from the eighth starting position.

“I can’t thank my crew enough,” Watt said in Victory Lane. “We wanted to run this Bicknell (Racing Products) car and we were waiting for the Enders motor. We got the call last week that it was done and made a trip up to Brewerton. We came home Saturday and the guys busted their butts to get this thing together. Who would have though it would end this way?”

Initially, it looked as though third-starting Rick Laubach of Quakertown, PA was going to be the car to beat. After Billy Pauch Jr. of Frenchtown, NJ brought the field to the green flag with Peter Britten of Brisbane, Queensland, Australia on the outside of the front row, Laubach darted past Pauch Jr. on lap three to take over the top spot.

He held that position until lap 10, when he rolled to a stop on the front straightaway with a flat left-rear tire. Laubach returned to the track with a fresh sneaker and eventually worked his way back to sixth before suffering another flat tire on lap 30. As a result of his trouble, Laubach received the Speedy First Aid Hard Luck Award.

Watt, who quickly made his way forward, was handed the lead when Laubach was forced to the pit area the first time and just moments after passing Neil Williams of Pittsgrove, NJ for the runner-up spot. After a slow start, Watt found his groove and knew he had a strong car as he battled into the top-five.

“The fuel load really made it tight in the beginning and getting stuck on the outside wasn’t good for me either,” Watt explained. “We actually lost two spots and we were 10th. On the (first restart), we picked off quite a few spots and the car was just getting better and better.”

Watt had to endure several restarts once he had the lead before green flag runs of 14 and 22 laps throughout the middle of the race allowed drivers to create space and discover what was in their arsenal. During the latter stretch, Watt’s lead grew as large as 3.8 seconds over Billy Pauch Sr. of Frenchtown, NJ.

It was cut in half while Watt worked through lapped traffic during the final 15 laps and completely erased by a caution with two laps to go that setup a green-white-checkered finish.

“At the end, I could tell (the track) started taking rubber,” Watt said. “I tried to pass some lapped cars on the outside and it wasn’t working so I had to move back down to the rubber. The car was actually starting to get a little bit tight in the rubber, so I did not want to see that caution. I wasn’t sure what it was going to do on the restart, but once the tires cooled down, the thing was good.”

Watt left no doubt he was the superior car on the night, pulling ahead of Pauch Sr. to a 1.4-second margin of victory. Pauch Sr.’s second-place finish was hard-fought, after he held-off a late surge from Friesen.

“We were pretty good tonight,” Pauch Sr. said. “I was just really on tire conservation. I didn’t think we were going to make it to the end because I had heat race tires on and I really had it grooved up. I forgot about it. I really didn’t think I would make the end of the race and I’m really thankful I did.”

The 11th-starting Friesen was a quick-mover early on, advancing to fourth by the time of the lap four restart. He bounced around the top-five throughout the race though and was unable to challenge for the lead. Eventually he passed both Williams and Brett Kressley of Orefield, PA to claim the final podium spot.

“When they prepped the track at intermission it made it kind of slick for us, kind of  greasy,” Friesen said. “We got a good bite on the bottom and were able to catch a bunch of guys sleeping at the start and kind of weasel our way up there. Then we got on the outside and cycled back. I’m happy with third. We battled through this one. Watty was fast all night long. The times in his heat races were unbelievable so he was due for one here.”

Frank Cozze of Wind Gap, PA started the night off with Pole Position Raceway Fast Time Award in group time trials with a lap of 20.717 seconds around the 5/8-mile oval. Cozze’s night ended on a lap 12 restart when he tangled with Britten and was taken off the track via a tow truck.

The Super DIRTcar Series is next in action at Weedsport Speedway for Big-Block Monday on May 21, 2017. Fans can watch the race LIVE on DIRTvision pay-per-view.