Rudolph Routs the Field at Weedsport 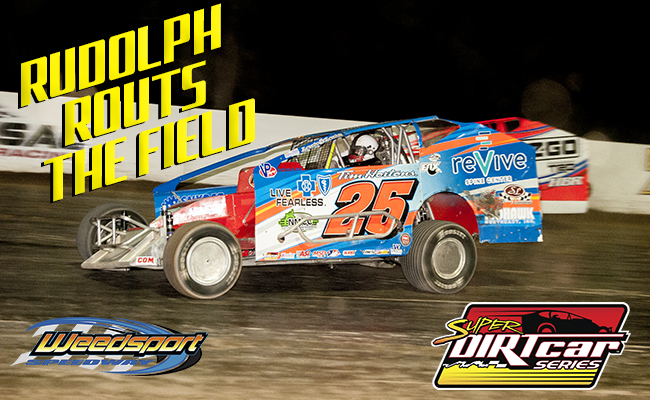 WEEDSPORT, NY – May 27, 2019 – Despite leading all 100 laps of the Heroes Remembered 100, fans were left amazed at the incredible race they had just witnessed. Rudolph fought back challenges from some of the best Super DIRTcar Series drivers to ever get behind the wheel of a Big Block Modified. Billy Decker, Stewart Friesen, and Max McLaughlin took turns trying to ground the high-flying Ransomville racer, but all efforts fell short. With a final lunge, Decker crossed the finish line under the checkered flag alongside the No. 25r, but was unable to complete the pass before the stripe.

Erick Rudolph’s winning ways started early in the day when he cruised to a Heat Race win. Next, he needed a little luck. In the Dig Safely NY 811 Redraw, Rudolph scooped up the outside pole and started next to Mike Mahaney. On the initial start, Rudolph outdueled Mahaney, and jumped into the lead on lap one, but that was no by means the end of the race.

NASCAR K&N East hot shoe Max McLaughlin was the next driver to test his mettle against Rudolph. McLaughlin found grip and racing room on the topside and took the fight straight to the No. 25r. Rudolph, sensing the young driver on his right side, began to race right up the track to the No. 6H’s door and then going back to the bottom in the corners. These two drivers put on a show for a big crowd of happy race fans.

Finally, with perhaps the strongest challenge yet, the crimson red of the Gypsum Express No. 91 began to fill Rudolph’s mirrors. Decker seemed to get stronger and stronger as the laps ticked by. Decker passed Friesen for second inside of ten laps to go. With both drivers cutting through lapped traffic, Decker managed to get a run on Rudolph coming to the finish line and barely missed out on the $7,500 paycheck. However, Decker and Rudolph both put up some important Championship points, especially with the points leader Matt Sheppard finishing eleventh.

On the finish, Rudolph noted, “I had trouble with a couple of lapped cars. I just couldn’t find a line around them. I definitely had a better car at the beginning and middle of the race than at the end, but nevertheless, we were able to hang on. We’ve got an awesome team here. I don’t know what to say. It’s pretty remarkable. Max and everyone in the pit area are great competitors. I had to change up a few things throughout the race to stay on top.”

Despite falling one position short of the win, Decker was pleased with his Gypsum Racing Big Block Modified, “We had a great race car. I would have liked to have raced a little longer, certainly. He’s [Erick Rudolph] been going good here for two years now. He had speed all night. I’m happy with the Gypsum Racing car, with the way it came alive. We had some speed in the Feature and it’s the best I’ve run here in a while.”

Friesen felt he was just a tick off of having the winning car. “DKM car was good. We were a half a tenth (of a second) off. It was tough sticking with Erick firing off on the restarts. At the end, we got stuck behind a lapped car there and Decker got us on the outside,” he said. The No. 44 was clearly searching for more on the track. “The top was good early. Max showed me that line up there but then it got dirty and went away,” noted Friesen.

Notably, points leader Matt Sheppard started the race in the sixth position and maintained that for the first half of the race. He never let the leaders out of his sight, until on lap 37, Sheppard drove the No. 9s a little too deep into turn one and clipped the inside barrier, which broke a shock and caused him to spin. Few counted the eight-time Champion out, but his charge to the front was capped at eleventh.
The KSE Hard-Charger Award winner Jimmy Phelps started twenty-third and diced his way through the field to finish sixth. Phelps needed a strong win over Ryan Godown in his Last Chance Showdown just to make the show. The HBR No. 98H and Godown’s No. 26 raced side-by-side for multiple laps before Phelps could sit comfortably in front.

A lot of strong competitors found themselves on the outside looking in when it came to setting the Feature lineup, including Billy Dunn, Anthony Perrego, and another eight-time Series Champion, Brett Hearn. But that is to be expected when 52 of the best Big Block Modified drivers in the country try to fit into a 28-car field. That is also why the Super DIRTcar Series is the premier dirt series in the Northeast.

Next up, the Super DIRTcar Series goes big. The Big Show XI at Albany-Saratoga Speedway pays out $11,111 to the winner in addition to a guaranteed start at NAPA Super DIRT Week XLVIII. Be there on Tuesday, June 25 or tune in with us at FloRacing.com.