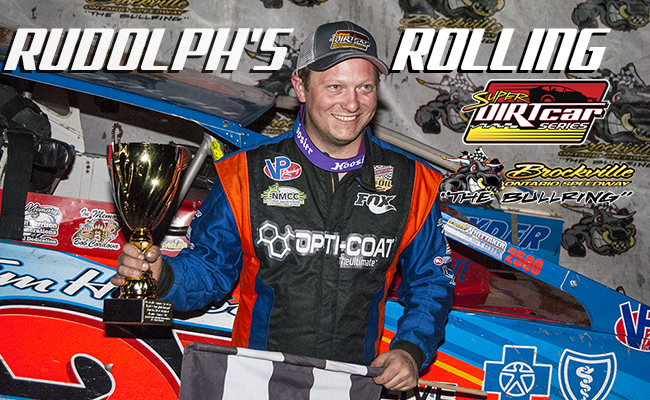 Brockville Ontario Speedway race winner Erick Rudolph did everything he could do to make up points on Matt Sheppard. He started the night out with the Billy Whittaker Fast-Time Award with a blistering 14.457 second lap. Then Rudolph went on to outduel Jimmy Phelps for a Heat Race win. Finally, he moved into the lead on lap 66 of the Feature and left the field behind.

When the green flag dropped on the Feature, David Hebert and Carey Terrence battled side-by-side for 15-20 laps. After Terrence began to fade, Rudolph took advantage of him on a restart and moved into second. From there, a chase was on with Hebert playing the part of the fox and Rudolph the hound. After catching lapped traffic, Rudolph struggled to find a way around the no. ONE car, but then disaster struck Herbert’s machine and he slowed on the front stretch bringing out the caution flag.

Rudolph noted, “It happened suddenly in front of me. I saw some sparks and he pulled over. I think it was a brake issue.” With that the no. 25 inherited the lead and never looked back. However, Rudolph knew he could not let up and had to find a way to seal the win: “It’s a 100-lap race. These are the best Big-Block Modified drivers in the whole world. You gotta get every spot when you can and you gotta race all 100 laps.”

Next, the Super DIRTcar Series travels south to the Can-Am Off-Road World of Oulaws World Finals at the Dirt Track at Charlotte. Rudolph has tempered expectations for the Championship, but does not plan on losing second place. “Mathematically I’m still in it. I’d have to have some great nights. Coming into the last couple weeks we were more worried about making sure we finish second. There’s a pack of five of them from second to sixth that’s real tight. We should have second locked up. We’ll go to World Finals and try the best we can like we always do.”

Graham Racing teammates Peter Britten and Danny Johnson finished second and third respectively. Britten fell just one spot short of picking up his first Super DIRTcar Series win of the 2018. He was pleased with how his team stuck with the car and kept making adjustments: “I think we slowly crept up on it all night. We just kept tweaking on it. I didn’t think we necessarily had any crazy pace, but we made good decisions all through the night. We got better and better and it shows making it up to second. When you go out for the Feature you never think you aren’t going to run well, but I didn’t think I had a car that could win it. You never know in these deals. I’ve learned not to worry about it. You normally find out on the first lap. When you put your foot down and it sticks, you know you got a good car. If you don’t feel stuck that first lap, it feels like it’s going to be a long race.”

The track changed significantly throughout the night. What began as a wide, multi-groove track, turned into a rubbered up single-file lower groove by the end. Britten noted that he was able to pick up a lot of positions in the first half of the race, “We got some green flag laps. I started ninth, Danny [Johnson] started tenth, and Rudolph started a row in front of me in seventh. It was racy. You could move. At about lap 65-70, it kinda got to be one groove and it was pretty much over at that point.”

The most challenging element of the track was a deep rut in the center of turn one. The rut claimed multiple left rear tires of those drivers who dared drive through it. “You can’t keep bouncing your car through a hole like that for 100 laps and expect to make it to the end,” said Britten. “I felt good running through it actually. I felt like it was a good line for me, but I knew it was just going to beat the crap out of my car. I changed my line and got away from it. I think everybody else did too and the bottom cleaned off real well and that was it.”

All dirt roads lead to the Dirt Track at Charlotte on November 1-3. All eyes in the dirt racing world will be on the track for the most spectacular season finale in motorsports. There the Championship will be decided between first place Matt Sheppard and rival Erick Rudolph.