Mat Williamson came into the 2022 season as the two-time and defending NAPA Auto Parts Super DIRT Week Champion. The expectations were high for the St. Catharines, ON driver.

Williamson claimed a Feature victory during DIRTcar Nationals at Volusia Speedway Park in February, and then went winless.

Until Thursday night at Ransomville Speedway.

After a slow start to the 2022 Super DIRTcar Series championship season, Williamson found momentum during SummerFAST with two fourth-place finishes, moving him back into second in the point standings. But he was still looking to get the “monkey off his back,” and score his first points-paying victory of the year.

All the pieces seemed to align as the Series rolled into Ransomville Speedway, where Williamson is the current 358 Modified points leader. He won his Heat Race and then drew the pole for the 75-lap Summer Nationals Feature in the redraw.

He jetted out to a quick lead at the green flag and held a tight grip on the lead throughout the race, never letting the likes of Peter Britten, Matt Sheppard, Gary Lindberg and Billy Decker get close enough to challenge.

“It’s much needed,” Williamson said about the win. “I’ve been pretty vocal with how we’ve struggled lately, and this was needed tonight. These guys work harder than anybody and when you struggle, you don’t know what’s going on. You don’t know if it’s you or the other driver. It gets to the point where you don’t know if you can do it anymore. So that’s nice to win.

“The starting position obviously helped us tonight. It seems like lately that’s the place you need to be to start these races. You gotta start out front. Hopefully we learned a thing or two.”

Peter Britten drew the outside pole for the Feature and maintained that position throughout the night, fending off Gary Lindberg and Sheppard. He attempted to stay within striking distance of Williamson on the multiple restarts, but the Williamson was too strong each time. Britten settled for second, with Lindberg rounding out the podium in third. 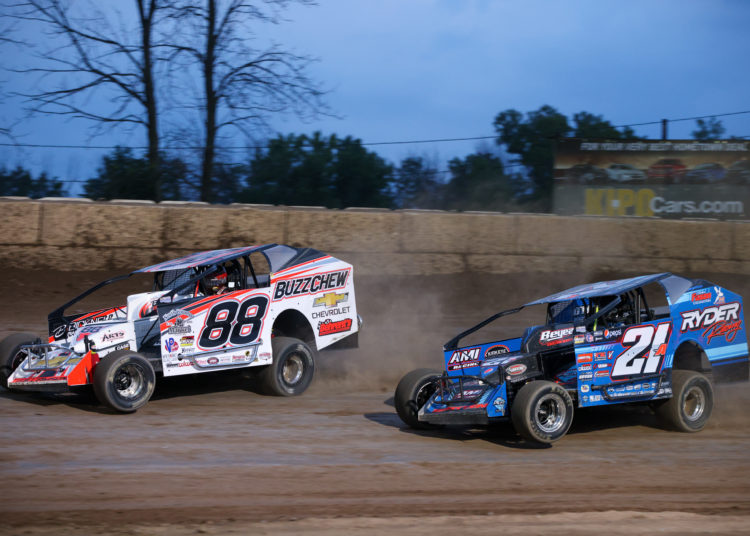 “The first part of the race, I couldn’t even stay near [Williamson],” Britten said. “He was just zinging. I didn’t know how he was doing it either because I didn’t have that much grip. He’s a local around here. He’s really good. He started on the pole. He just knows exactly what to do here. He knows how to set up the car.”

Lindberg, of Ridgeway, ON, started the Feature in fourth but found himself in sixth halfway through the race. After some slick maneuvering in traffic, he found the right formula to pass Sheppard, the eight-time and defending Super DIRTcar Series champion.

“The restarts here are always better if you start on the top,” Lindberg said. “We were lucky we were on the top. He gave me room and I gave him enough room. I know he runs the Series, so I didn’t want to mess with him. Earlier I was behind him, so I didn’t want to push the issue. When I was beside him, I knew he would run me clean. We just got lucky and rolled around on the top on him.”

UP NEXT: The Super DIRTcar Series will travel back to Lebanon Valley Speedway in West Lebanon, NY on Sept. 3 for Mr. DIRT Track USA. It will pay out a massive $25,500 and grant the winner a guaranteed starting spot at the 50th Running of NAPA Auto Parts Super DIRT Week.