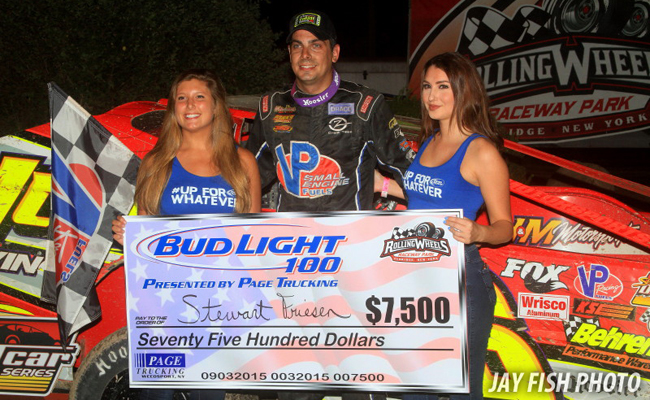 ELBRIDGE, N.Y. – September 3, 2015 – Stewart Friesen led the final 88 laps of the Bud Light 100 at Rolling Wheels Raceway to score his third straight Super DIRTcar Series win and a $7,500 payoff in the Petruska Racing Atlas Paving No. 66.

Friesen drew the pole, yielded to Anthony Perrego for 12 laps and then took over. Pat Ward and Danny Johnson stayed with the leader during the first half of the race, but eventual runner-up Larry Wight pressured him the most for the final 20 laps. Wight, could hang with Friesen and gain ground down the backstretch into turn three, but he couldn’t make the Gypsum Express No. 99L stick into and off the first turn well enough to ever get to Friesen’s door. Friesen’s margin of victory was two car-lengths.

“We had radios tonight and Jared (Petruska) said he’s coming, but he’s a little sketchy in turn one,” Friesen said. “We were good. The track changed quite a bit. It would clean off on the restarts and I could open it up a bit. Those red cars (Wight and his teammates Pat Ward and Billy Decker) were ganging up on me, but we were strong.”

Wight passed Decker for third on lap on lap 76 and went by Ward two laps later.

“Late in the race I was getting down on fuel,” Wight said. “I had to half-throttle it some. I couldn’t enter one as high as he could and I’d lose what I’d gained.”

Ward and Danny Johnson, who blew a right rear of lap 47 and never returned, stayed within reach of Friesen after he took the lead from Perrego, while the rest of the field got strung out behind them

“I went with a softer tire than the 99,” Ward said. “It helped me hang around for a while, but when I saw Wight come up on me, I knew I was in trouble. Stewie ran a great race. There was no catching him.”

Tim Fuller was a strong and steady fifth after twenty laps of dicing with Decker mid-race. Brett Hearn started 11th and placed sixth.