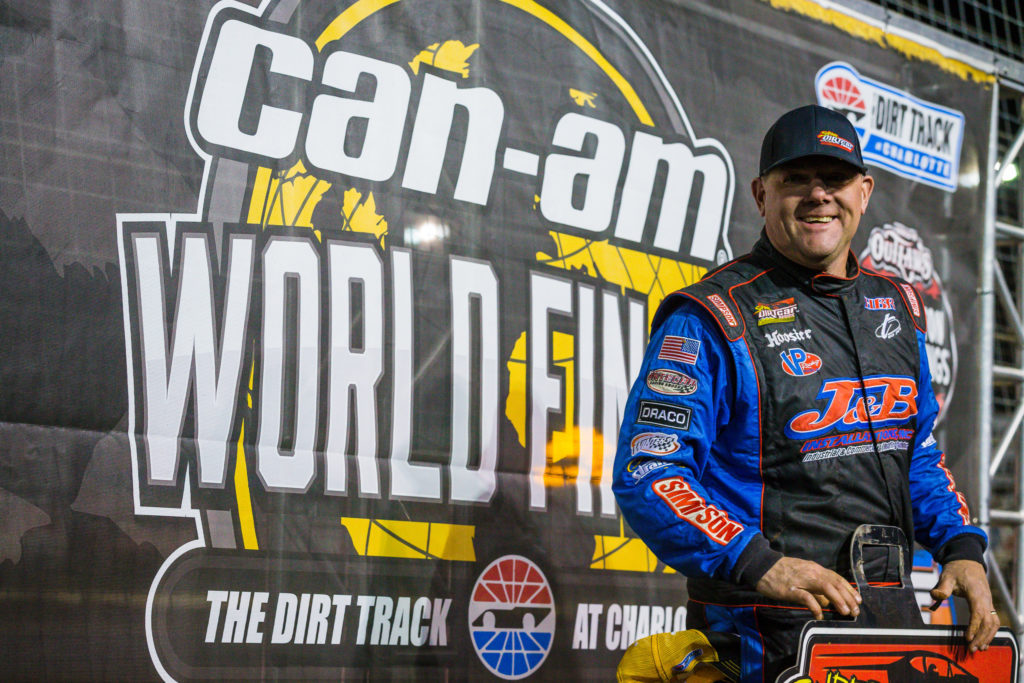 CONCORD, NC — Nov. 8, 2019 — High drama for the Super DIRTcar Series championship exploded on Friday in the Can-Am World Finals at The Dirt Track at Charlotte. While Mat Williamson and Matt Sheppard waged a battle for series supremacy that started during their Heat Races, Jimmy Phelps powered to his first Super DIRTcar Series victory of the season.

Sheppard and Williamson were tied for the Super DIRTcar Series championship lead entering Friday’s action in the closest championship bout in Series history. As luck would have it, Sheppard and Williamson were scheduled to start second and third in a Heat Race with vital points at stake long before the Feature was set. Then pole-sitter Brett Hearn was issued a penalty for a work area infraction, moving Williamson to the front row next to Sheppard. Williamson, eager to take the points lead going into the Feature, jumped the start and was sent back a row under yellow. Sheppard went on to win the race and Williamson took fourth, creating a three-point advantage for Sheppard.

Finally, when the green flag waved on 40-lap Feature, Sheppard was charging through the top 10 while Williamson was mired mid-pack. Then the luck swung back toward Williamson as Sheppard’s car suddenly veered sideways in front the pack in turns one and two. Max McLaughlin made contact, but it was just enough to straighten Sheppard out without doing too much damage.

Third-place running Larry Wight was behind Sheppard when “I suddenly had a full view of the side of the 9s!”

But that wasn’t all fate had in store for Sheppard. Entering the third turn Sheppard again struggled with his brakes and clipped the rear bumper of Wight.

“I wasn’t sure what was going on there, but I know I felt something in turn three when we were going to the bottom there,” Wight said of the contact.

The contact was enough to cut down the right front tire on Sheppard’s machine, forcing him to the work area.

Incredibly, Sheppard minimized the damage by clawing his way through the 38-car field to finish 10th, now trailing Williamson by 18 points headed into Saturday’s action.

Williamson had his own trouble throughout the day. He felt he left points on the table in the Heat Race after being penalized for jumping the start alongside Sheppard.

“Today was tough,” said Williamson, of St. Catharines, Ontario. “We felt we got the raw end of the deal on the calls (the officials) made. But we got through it and stuck with it all day and now we can control our own destiny (Saturday).

“We’ll make some changes and we should be better.”

Meanwhile, Phelps and his HBR team had struggled for most of 2019. Despite always running in the top 10, it seemed as though they couldn’t break into Victory Lane. A recent chassis change has helped Phelps get back on track, and that was never more evident than on Friday night.

“It feels great on a lot of levels,” said Phelps, of Baldwinsville, NY. “We were shy on the results page for the season, and this is great, but it doesn’t make up for all the hard work and grief that the team went through all year. They haven’t seen the results that they deserve for how hard they worked. This really helps going into the off-season.”

The No. 98H looked right at home at the top of the field all night. While some attrition played into his hands, Phelps had a fast race car.

“You couldn’t ask for a better car on a better night on a better stage. We are very fortunate that we were able to do it,” Phelps noted.

The Baldwinsville Bandit described his race as he chased Billy Decker and took the lead:

“Our car rolled the bottom really well and that helped early with getting some track position. Each restart we got a couple spots. Once we got into clean air I was on par with Decker. It would have been interesting to know if we had enough to get by him. [Decker suffered a flat tire]”

Second-place Erick Rudolph, of Ransomville, NY, took a couple stabs at Phelps while he led, but the No. 98H was not to be denied a Can-Am World Finals victory.

Rudolph looked strong all race in his blue and white No. 25R. While he missed taking the win, he and his team were very happy with their result.

“Second is my best ever finish here,” Rudolph said. “I’m not sure I was ever even in the top five. We’ve been coming here for a while and just never really had the stuff. Tonight, we had the stuff and we had the chance and that’s a true testament to the team. I think Jimmy [Phelps] had the car to beat tonight and a couple contenders dropped out too. We put ourselves in a position to win and that’s all we can ask for.”

Larry Wight crossed the finish line third in his crimson Gypsum Racing Big Block Modified in what some might say was essentially a brand-new car or at least an experimental one for the team.

“We did a lot of changes to the car today,” Wight said. “We switched over from a bar car to a coil car. We were running around the pits trying to find all the parts to do it. I gotta thank Paul St-Sauveur. He gave us the last piece we needed for the left rear. We had a good car. We just need to fine tune it a little bit. We haven’t been on coils at all this year so now we are on the learning curve that everyone went through at the beginning of the year and doing it at the last race.”

Why the big change and why now?

“I got sick of following coil cars,” Wight said. “So, I finally bit the bullet and joined them. Jake and Brandon did a great job getting everything swapped over. It’s an untested car I’m happy we finished third.

Wight will be looking to improve by two positions in Saturday’s Feature.

For the sixth time this season, Decker picked up the Billy Whittaker Cars Fast-Time Award. He took advantage of his quick-time by staying out in front for the duration of his Heat Race. That put Decker in the Top 8 Redraw and he pulled the number one position. Unfortunately, Decker wound up cutting a tire in the Feature while leading and finished nineteenth.

The KSE Hard Charger of the race was Justin Haers for passing a mind-boggling 22 cars in the 40-lap Feature. Haers will be a force to reckoned with in Saturday’s Feature at The Dirt Track at Charlotte.

There is one schedule update for Saturday. The event kicks off with Opening Ceremonies at 3:45 pm followed by Super DIRTcar Series Last Chance Showdowns.

If you can’t make it to the track, be sure to tune in for the conclusion of the 2019 Super DIRTcar Series Championship tomorrow at 4 PM! Watch live with our live streaming partner FloRacing to catch all the action and drama of the Championship battle.