Phelps has a “BIG” night at Albany-Saratoga 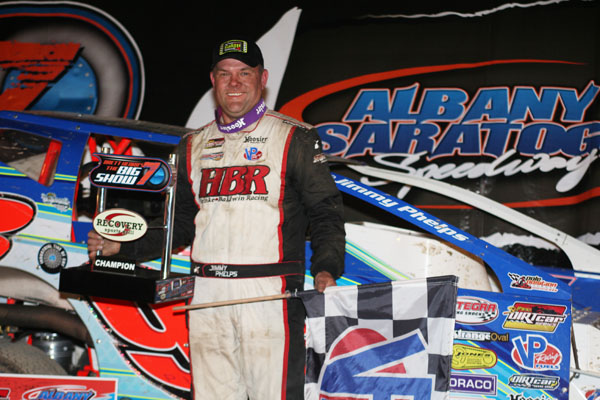 Phelps has a “BIG” night at Albany-Saratoga

Phelps started 5th in a 30-car field and passed polesitter Matt DeLorenzo to take the lead for keeps on lap 32. DeLorenzo was never passed again on the way to his best-ever Super DIRTcar Series finish.

Series point leader Matt Sheppard withstood pressure from a fast-closing Hearn to place third by half a car-length.

Hearn brought out the third of nine yellows with 28 laps in the books when a torque arm broke on the Madsen Overhead Doors No. 20 and got caught up in the driveshaft. He got back out of the pits just in time to avoid going a lap down and then powered his way back up through the field. Gary Tomkins – from 21st – finished 5th.

Phelps proved untouchable on the numerous restarts even though they were much appreciated by DeLorenzo.

“My car was quick for a few laps each time and then it would get free and I’d worry about Sheppard,” DeLorenzo said. “I wasn’t going to catch Phelps.”

“We’ve been getting better and better and now we’ve finally got one,” Phelps said. “The car was good-good. I could put it anywhere. I’ve very proud of the HBR team. It feels good to win here. I love Albany-Saratoga. The fans here are phenomenal.”

Kenny Tremont breezed to a win in his heat and was running 4th at the halfway before dropping out on lap 62 and finishing 22nd. Stewart Friesen time-trialed well, but struggled early. Danny Johnson was running in the top-5 when he spun out on lap 38, pitted and lost 14 laps in the pits.

The next event on the Super DIRTcar Series schedule is set for August 23 at Cornwall Speedway in Cornwall, Ontario.