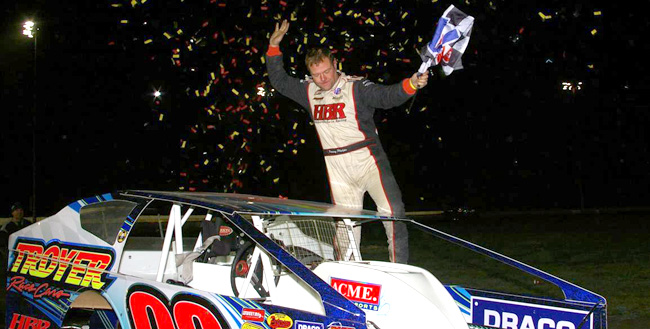 Phelps Charges to Victory at Mohawk, First Series Win of the Season

In the Big-Block Modified ranks it was Billy Decker who led 30-car starting field to the green with Clayton Benedict to his outside. Decker jumped out to an early lead as he looked for the Mohawk weekend sweep after capturing the DIRTcar 358-Modified Series win on Friday night.

Hearn showed he’d be a force to be reckoned with early in the 100-lapper as he made quick work of Benedict to move into the runner up spot. Hearn then quickly closed on Decker for the top spot as the leaders negotiated lapped traffic.

The leaders would get a break from traffic when the caution flew for a slowing Justin Haers on lap 20. Under the caution, in an attempt to capture the success found by Decker on the previous night, 10 cars pitted for new right rear tires. Pit stops would prove to be a recurring theme throughout the night, as multiple drivers would come in for fresh rubber during seemingly every caution flag period.

Carey Terrance and Danny Johnson were two drivers who made vast improvements after making a tire changes. Terrance used the extreme outside for much of the night while Johnson would run wherever possible to complete passes on other drivers.

As Terrance and Johnson were charging from the back, Hearn was challenging Decker for the lead. Hearn completed the pass as he went to the outside around Decker for the race lead on lap 36 and immediately established himself as the car to beat as he jumped out to a big lead.

Despite a bevy of caution flags, Hearn was able to build up a lead of more than a straightaway in the Madsen Motorsports #20 as Jimmy Phelps moved past Decker for second on lap 87.

As the race wore on, so did Hearn’s right rear tire as it began to shake violently. Hearn attempted to nurse the car to the finish when Phelps began quickly catching him for the lead.

On the final lap, Phelps kept his car glued to the bottom off of turn 2 as Hearn’s ailing car slid up the racetrack, allowing Phelps to complete the pass and go on to pick up his first Big-Block Modified Super DIRTcar Series win of the season. Hearn would hold on for second, with Decker finishing third over hard-chargers Terrance and Danny Johnson rounding out the top-5.

Terrance picked up an extra $500 as he was the highest finishing DIRTcar 358-Modified.

The DIRTcar Pro Stock Series saw Corey Wheeler and Joey Ladouceur virtually tied for the Series points lead heading into the event. Wheeler jumped into the race lead on lap 10 as Ladouceur was making his way through the field after a lap-4 pit stop.

Rob Yetman, who was running second, slowed late in the race as his night came to an end, leaving Corey Wheeler to go unchallenged and pick up his first career DIRTcar Pro Stock Series victory. Ghislain Valade, Stephane Lebrun, Dion Oakes and Ladouceur rounded out the top-5.

Next up for the Super DIRTcar Big-Block Series and DIRTcar Pro Stock Series is Super DIRT Week XL Oct. 5-9 at the New York State Fairgrounds in Syracuse. For more information, or to purchase tickets, visit SuperDIRTWeekOnline.com.