BARBERVILLE, FL — For the second consecutive night, Stewart Friesen charged to victory with the Super DIRTcar Series Big Block Modifieds at Volusia Speedway Park’s 50th DIRTcar Nationals, sweeping to the lead past Erick Rudolph with 10 to go and holding on to the checkered flag. 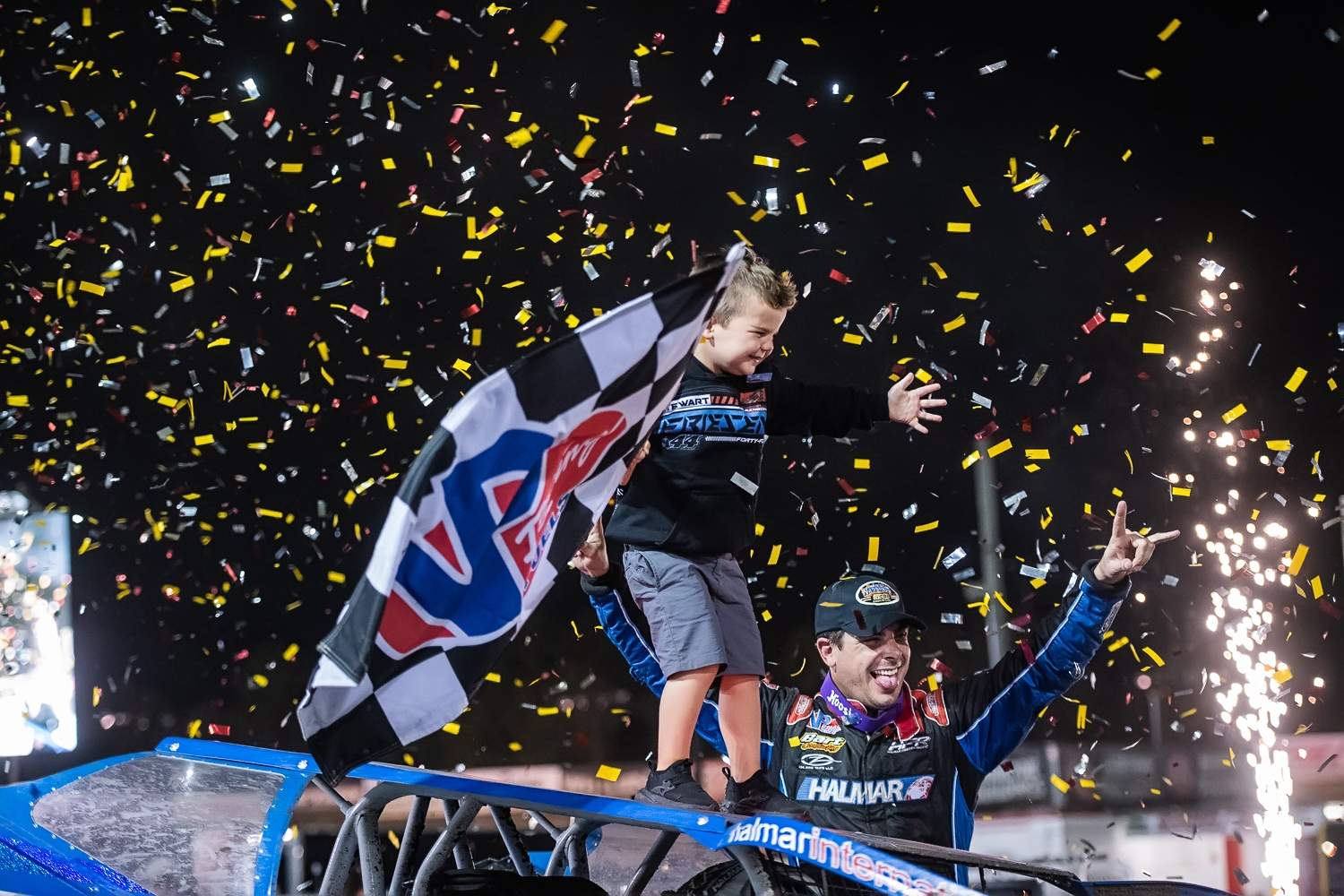 A field of 32 roaring Big Block Modifieds took the green flag Wednesday night to start the second Series Feature of 2021, and after picking up his second Billy Whittaker Cars Fast-Time Award in two days and convincingly winning his Heat Race, Friesen redrew sixth to start the Feature. With Mat Williamson, Jack Lehner, Erick Rudolph, Billy Decker, Matt Sheppard and more in his midst, Friesen had his work cut out for him in the 30-lap Feature.

“We had a plan coming into this,” said Friesen, of Sprakers, NY. “If you want the plan to work you gotta work the plan and it’s paid off.”

The hard work and wins have paid off indeed as Friesen collected his second $4,000 check at the DIRTcar Nationals.

The Volusia Speedway Park surface produced phenomenal Feature racing for the Big Blocks as well as the World of Outlaws Morton Buildings Late Models. The fastest racing lines went high to low, low to high, and everywhere in between. Drivers had their choices to make passes happen. 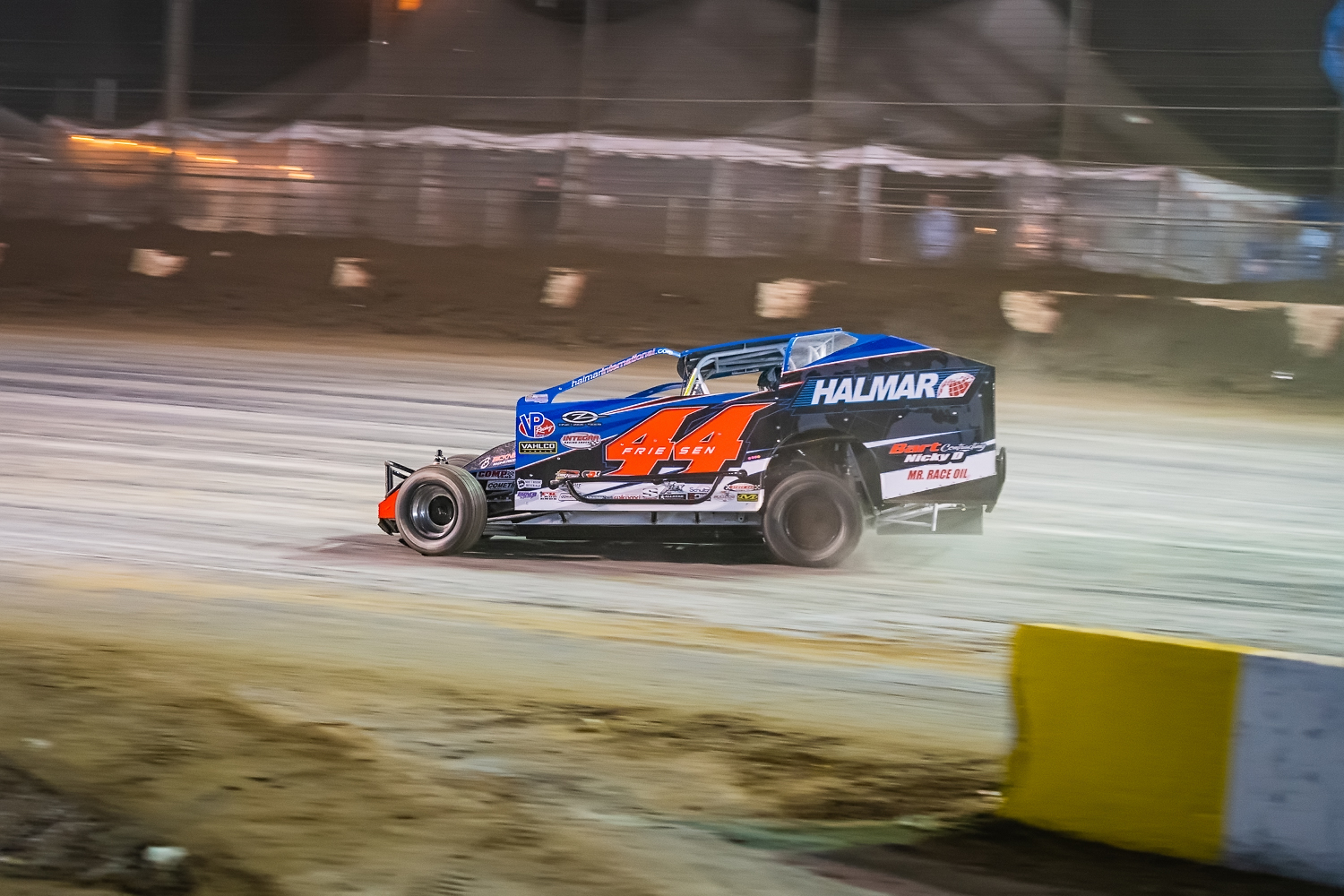 “This is a very technical and challenging race track right now,” noted Friesen. “It’s kind of like mogul skiing on ice. You gotta try to get the car loaded up right. If you miss it, it shoves, but if you get it loaded up this thing was on the money.”

In the first half of the race, Friesen and his #44 Halmar Racing Big Block were forced to watch the top 5 battle door-to-door. Then lapped traffic came into play and remained a factor as there was only a single caution flag for the Big Blocks all evening.

“I was just trying to see which way those guys [lapped cars] were going,” said Friesen. “It’s super slick in spots and in other spots you think it’s slick, but it turns out to be gripped up. Watching Max [McLaughlin] and Erick [Rudoloph] dice there and I got passed and lost a bunch of spots. Jack [Lehner] and Maresca got back by me. It was an awesome race track. I was just trying to find different lines and move around.”

Rudolph, from Ransomville, NY, started third behind the formidable front row of Williamson, from St. Catharines, ON, and Lehner. Rudolph had an excellent initial start and immediately took the fight to the front row starters. After dispatching Lehner, he got alongside the defending Series champion Williamson.

Williamson and Rudolph drove cleanly side-by-side for several laps before Rudolph took over the top spot only to be assailed by Max McLaughlin in the #32C. McLaughlin and Rudolph went toe-to-toe but the #25R built a lead in lapped traffic. 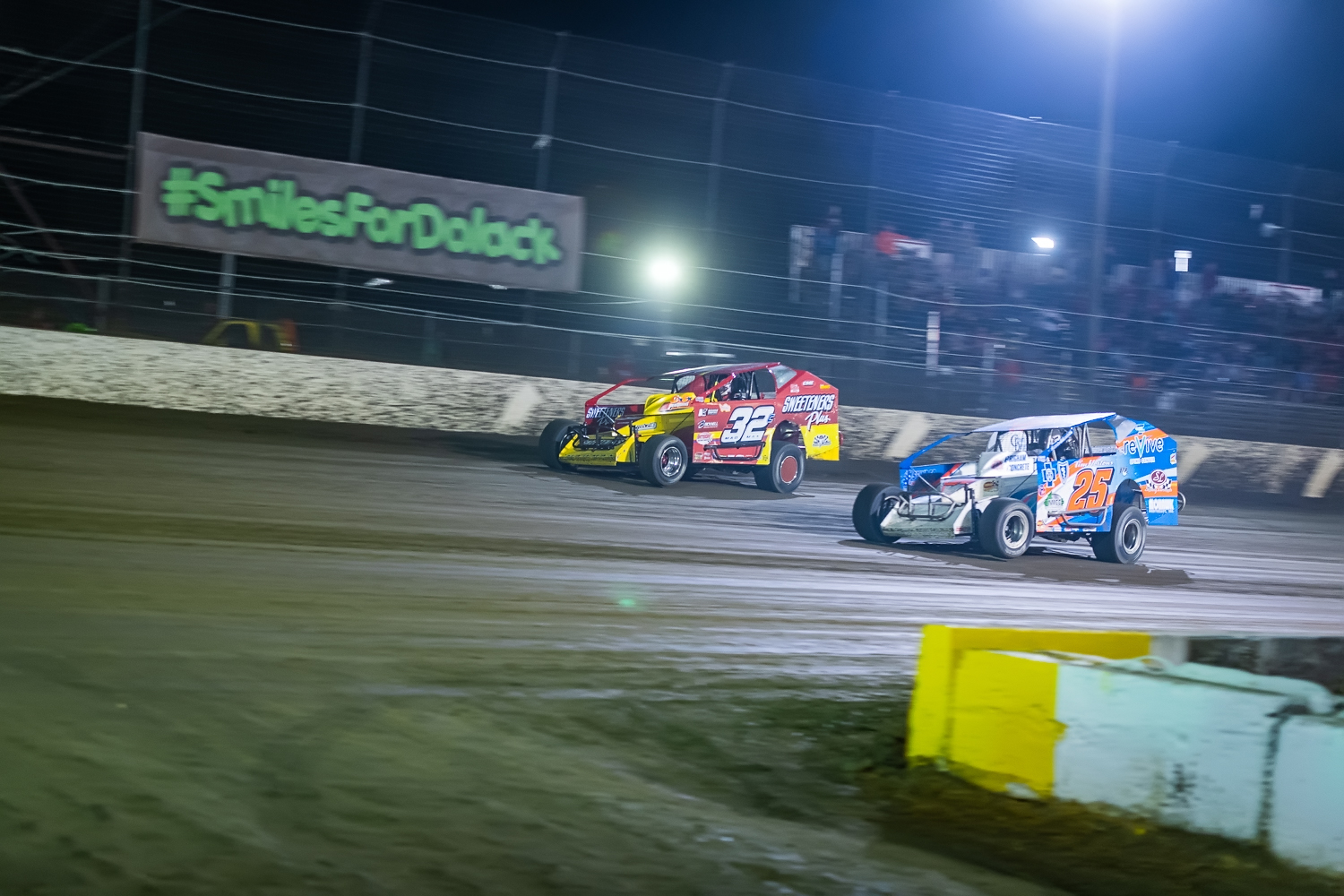 “We started third and were able to wrestle away the lead from Williamson,” said Rudolph. “It seemed like we were able to work lapped traffic pretty good and I really didn’t want to see the caution come out, but it made a race out of it. Friesen got by me and we were about the same speed but the race played into his favor tonight.”

After a caution flag came out for a stalled out #19 of Tim Fuller, Friesen pounced and worked the middle of the track and the outside to make the pass on Rudolph.

Maresca, from Pierrepont, NY, struggled in the first night of Series action. However, his #7MM came back on Wednesday with some important shock changes that helped the balance of the car. Maresca drove up from the sixth-place starting position, passing Lehner, Mclaughlin, and Williamson in the process and proved the St. Lawrence Radiology #7MM is likely a threat for more podiums throughout the rest of the DIRTcar Nationals.

Danny Creeden, from Wurtsboro, NY, started deep in the field: 27th place. But the driver of the #16C used the long green flag runs to his advantage and managed to pass 11 cars for the hard charger award. He finished 16th.

In Tuesday’s opener, the #26 ended the Feature on its roof, but hard work overnight and through the day allowed Derrick McGrew Jr. to finish the Feature in 19th.

Thursday is Night 10 of the 50th DIRTcar Nationals and race three for the Super DIRTcar Series. If you are unable to make it to Volusia Speedway Park, be sure to watch live on DIRTVision and follow us on Twitter, Facebook, and Instagram for full coverage of the DIRTcar Nationals.