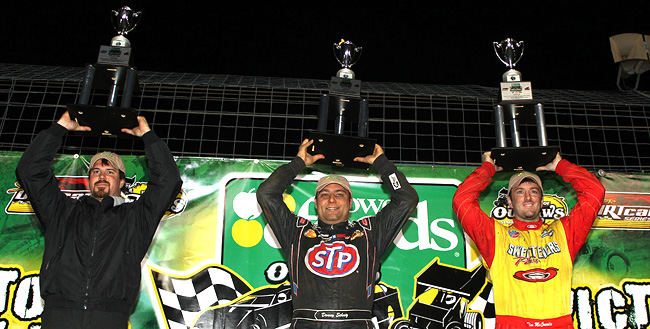 McCreadie of Watertown, N.Y., passed Sheppard on lap 19 and led the final 22 laps to win Friday night’s Modified portion of the tripleheader event at the four-tenths-mile oval, banking $6,000 for his first Super DIRTcar Series triumph of the season.

Having won last year’s season finale at the World Finals driving for Vinnie Salerno, McCreadie returned to the seat of the No. 4 Bicknell and raced to the front from eighth starting spot.

“Anytime you can race in front of this many people it is fun,” said McCreadie. “Most of us here are sports fans and we go to the big time events to be part of the atmosphere and I know what some of those players go through because when we come here it is a big-time atmosphere.”

Tim Fuller took the early lead from the pole, but Sheppard, who was the fast qualifier on Thursday, zoomed to the front on lap four and led until McCreadie made his winning move past Sheppard’s JB Motorsports Bicknell No. 9s on lap 19.

Sheppard said it was his mistake that helped McCreadie to the lead.

“We got right to the lead quick and I think that actually hurt me a little bit because I didn’t know that top lane in three and four had come in and Timmy drove right around me up there,” Sheppard said. “Then I moved up there and I said to myself, ‘You dummy if you had been running up there in the first place you might have won this race.’”

McCreadie said he was simply picking the lane his competitors left open.

“You can’t follow all night,” McCreadie said. “I started eighth and I had to go where they weren’t and the cushion is always fast if you can get up on it and bend through it. It is a matter of getting your car right and we were really too tight to be up there.”

From there Sheppard of Waterloo, N.Y., chased McCreadie through lapped traffic for the remainder of the 40-lap race, finishing .981 seconds behind the second-generation hotshoe.

But at the end of the day Sheppard, who entered the race 39 points behind Billy Decker in the race for a second consecutive Super DIRTcar Series championship, was the big winner.

After Decker of Unadilla, N.Y., blew an engine in hot laps and went to a back-up car, he struggled to a 13th-place finish and Sheppard grabbed a 10-point (2,399 to 2,389) heading into Saturday night’s program, which will include heat races and another 40-lap feature.

“Whatever (lead) we got is a lot better than what we came in here with,” said Sheppard. “We came in here 53 behind and now it is pretty much a one-race shootout.

“It changes it a little bit. We came down here to win and not hold anything back and that is what we have been doing. Now, that we have the point lead, we still have to run hard because Billy (Decker) will be right up there tomorrow night. We need to be either right in front of him or right behind him, one or the other.”

Remaining tickets can be obtained by clicking www.CharlotteMotorSpeedway.com or calling 1-800-455-FANS.