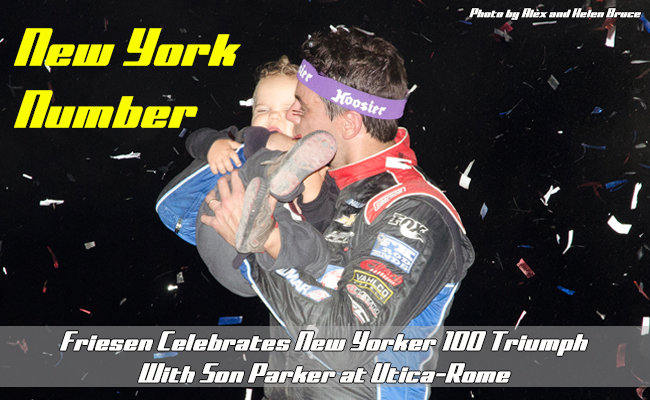 VERNON, NY – July 2, 2017 – Stewart Friesen took the lead from Pat Ward on lap 55 with a pass in the slick outside lane after a lap 45 restart and withstood a fury of action, including a pair of red flags in the final 25 laps to win the New Yorker 100 at Utica-Rome Speedway on Sunday night. It was the first Super DIRTcar Series victory of the season for the Sprakers, NY native and the 24th of his career to give him sole possession of 11th on the Series all-time wins list.

“What a racecar, wow,” Friesen said in Victory Lane. “This Halmar team just worked so hard to be better on these slick tracks.”

The track was especially slick for the New Yorker 100, despite the excessive amount of rain over the last month in the area. After setting the Pole Position Raceway Fast Time and then winning his heat, Matt Sheppard pulled the pole for the 100-lap main event.

Sheppard came to the green flag with Max McLaughlin on the outside of the front row. The Waterloo, NY native Sheppard took the early lead while Ward, who is a weekly regular at Utica-Rome along with Sheppard, quickly jumped into third behind third-starting Billy Decker.

Decker kept pace with the Series point leader after they caught lapped traffic on lap 15 and on lap 37 drove to the outside of Sheppard for the lead in turn three. Off of turn four, Decker crossed lanes and raced inside of Sheppard in turn one and completed the pass exiting turn two to lead lap 38.

Decker, who has two wins on the tour this season, had the lead for just one lap though when the caution waved before lap 39 was complete after Sheppard slowed with a flat right-front tire, forcing him to surrender the second spot.

On the ensuing restart at lap 45, Ward rode the outside lane to the point and shuffled Decker back to second. Friesen’s car hit its stride midway through the race and he sped past Decker for second on lap 52. Just two laps later, Friesen was knocking on Ward’s door in search of the lead. Friesen found grip up top and soared in the high groove to clear the No.42 for the number one spot on lap 55.

A lap after Friesen led, the caution waved again for a slowed Alan Johnson who had trouble with his No.14J. The restart with 61 laps in the books was the best for Friesen as he used the next nine laps to race ahead to a more than two-second advantage over Ward. The deficit was eliminated for Ward when Claude Hutchings Jr. rolled his No.84j in turn three after contact with Beth Bellinger’s No.1s to cause a red flag.

Friesen was strong again on the restart and cruised away from Ward despite the latter’s challenge on the bottom of the track. With 20 laps to go, the top-five were single-file while a three-car battle waged behind them for sixth between Brett Hearn, Sheppard and Wight. Hearn maintained sixth while Sheppard and Wight raced side-by-side for seventh.

Following a lap 86 restart for a spun Nick Webb, Friesen again raced away from the field until the second red flag of the race came on lap 88. The event was stopped when Sheppard and Wight collided on the backstretch, sending Wight’s No.99L airborne for two end-over-end tumbles in turn three. The incident ended the night for both drivers.

Ward’s final chance to reel in Friesen came on the restart with 12 laps to go, but it was not to be as the Sprakers driver drove away to his 54th career victory at Utica-Rome.

“I found something on the outside and we were able to race past Pat (Ward) and Fuller and Decker,” Friesen said. “I can’t believe it. This place has been tough. I think we have something now. It was pretty sporty out there.”

The win was especially important for Friesen, who previously raced weekly at Utica-Rome. It was the best possible home coming for his No.44 team to shake their winless start to the season.

“This is great, especially here,” Friesen said. “This is probably the toughest track on the circuit. It’s pretty cool. We need to get a plus one to keep Matt at bay. He’s coming on the win list, so this will keep him back for another week.”

Ward was satisfied with his second-place finish behind Friesen, his best result to date in 2017 with the Series.

“My crew guys made some adjustments after the heat and it took right off,” Ward said. “I thought we were pretty good and then Stewart drove around me, like he does a lot of times. He was good. I’m happy with second. We had a good car.”

Tim Fuller completed the podium with a third-place finish, his best finish of the campaign and his first top-five result.

“We had a good run,” Fuller said. “Thanks to Ray Graham. I had a good car. To finish in the top-three at Utica is pretty amazing.”

Earlier in the night, Wight, Sheppard, Fuller and Friesen won qualifying heat races. Rob Bellinger and Keith Flach claimed wins in the Last Chance Qualifiers. The KSE Hard Charger was Gary Tomkins, who raced from 14th to the seventh finishing position. Jimmy Phelps and Wight were the Dig Safely NY redraw bonus eligible drivers after starting eight and eleventh respectively. Phelps finished 14th while Wight was scored in the 25th position after his wreck.

The Super DIRTcar Series returns to action at Airborne Park Speedway on Thursday, July 6 for its first-ever visit to the Plattsburgh, NY track. For additional event information, visit www.AirborneParkSpeedway.com.