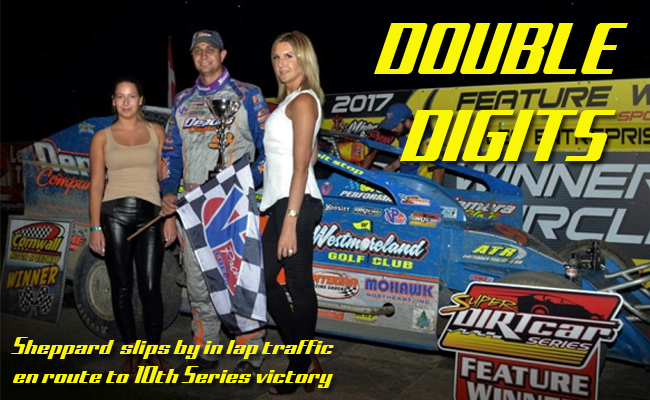 Lap traffic being the great equalizer in the final portion.

CORNWALL, ONT, CAN – SEPTEMBER 17, 2017 – Billy Decker seemed to be the man to beat at Cornwall Motor Speedway but lap traffic became challenging for the leaders as Matt Sheppard was able to slip by Decker with 9 laps left in the feature to capture win number 10 in the Super DIRTcar Series.

’Traffic is always the great equalizer and I think that Billy had a faster car than me, it was wild!” said Sheppard talking about the final portion of the event. “It was a long day, very hot, but we are here, always fun to race at Cornwall on this small bullring” added Sheppard. “The points will be tight for the rest of the year, again tonight, we finished 1, 2, 3 with Billy and Larry” finished Sheppard.

Decker had the quickest car on the speedway but got caught with slower cars, upset at himself, “The guys prepared me a great car but I am responsible, I made the mistake with lap traffic’’ said Decker. “It has been one of my best finishes here in quite some time and quite pleased that we were able to get that show in and thank you to the great crowd” alluded Decker to his success at Cornwall.

Completing the podium was Larry Wight, “It will be going down to the wire up to [World Finals] Charlotte, no mistakes can happen as again tonight the same top 3 is on the podium” said Wight looking towards the rest of the Super DIRTcar Series event remaining on the calendar.

Tim O’Brien and Keith Flach led the field of 30 cars to the green as Flach was in the lead when Steve Bernard slowed the field down on the initial lap and yellow lights were out.

Great action in the front as Larry Wight had a great start and took the lead over Flach on lap 25 as Billy Decker followed suit two laps later.

Wight had Decker as a dancing partner as Decker grabbed the lead over Wight as Matt Sheppard moved up to third.

Decker pulled away from the field as Wight, Sheppard, Flach and Chris Raabe were the top five as the race quickly got to the halfway point.

Decker had a strong car at Cornwall with Wight and Sheppard racing together for second spot. The leaders got into heavy traffic with 60 laps in the books. Cornwall Speedway champion Chris Raabe slowed down and caution was out on lap 72.

Decker remained the top man as the top three didn’t change. The battle continued for the second spot as Sheppard was able to pass Wight for the position on lap 81 and set his sights on Decker.

Lap traffic helped Sheppard as he closed in with Decker with 10 laps to go. Sheppard used the inside lane and surprised Decker on lap 92. Both drivers challenged each other as Decker closed in but Sheppard stayed in front as he got win #10 on the tour in 2017!

The Super DIRTcar Series heads to Fonda Speedway in Fonda, N.Y. on Saturday, Sept. 23 before the granddaddy of all Big-Block Modifieds races with NAPA Super DIRT Week at Oswego Speedway on Oct. 1-8, 2017.