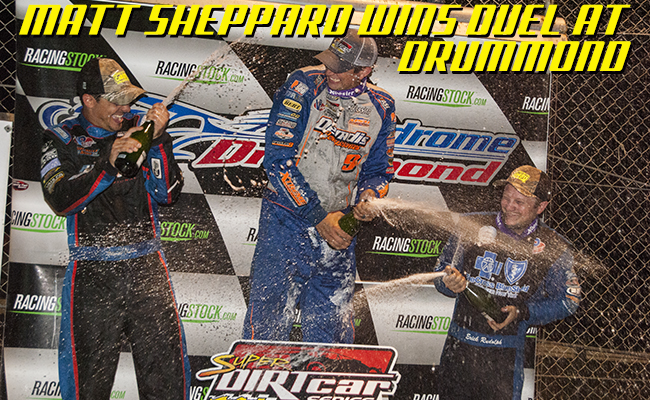 DRUMMONDVILLE, QC – July 24, 2018 – It was a clash of the titans once again as Super Matt Sheppard passed and held off Stewart Friesen to win the Racing Stock 100 at Autodrome Drummond. The pair of superstars swapped positions from the previous night’s race at Autodrome Granby, where Friesen won and Sheppard took second place. The 4/10 of a mile race track in Drummondville, Quebec featured a tremendous amount of passing throughout the entire field. The running order was constantly in flux as drivers searched high and low for a fast way around. But in the end Matt Sheppard’s smooth, easy, high line on the cushion proved to be the fastest line of them all. Erick Rudolph grabbed third for the second night in a row as well.

The no. 9S finished in Stewart Friesen’s tire tracks at Autodrome Granby, but Sheppard counter-punched at Autodrome Drummond by flipping the script and taking home the checkered flag ahead of the Halmar Racing no. 44. Sheppard said, “Stewie’s obviously been running really good. It seems like the nights we’ve been really good we’ve had some really bad luck. We kept getting those cautions right at the end. I just had to hold on and get this back to Victory Lane.”

The race was not for the faint of heart as multiple cautions inside the last 25 laps gave Friesen several opportunities to make the pass. But once Sheppard found his preferred line on the high side of the track, he never left it. Lapped traffic, when the green flag runs were long enough for the leaders to catch it, made life difficult for the no. 9S racing driver, but he managed to get through when necessary. Otherwise, on the open track, Sheppard was obviously the fastest car in the field. Once he cleared Friesen’s jabs for the lead, Sheppard would slowly pull away from the no. 44. Wins never come easy though and Sheppard’s team had to be on top of the conidtions: “We made some good adjustments. A lot of rain the last two nights and a lot of restarts.”

Sheppard was ecstatic to win in front of the massive Autodrome Drummond crowd. “Thank you guys for having us up here. Thanks to all these fans. The crowd is incredible here. The Canadian fans really get into it.”

After outpacing Matt Sheppard in the previous night’s race at Autodrome Granby, Stewart Friesen, the five-time NAPA Super DIRT Week Champion and NASCAR Camping World Truck Series ace, had to settle for second at Autodrome Drummond. Friesen started fifth and moved his way up into the lead, but Sheppard came on strong on the high side and passed the Canadian driver. Despite losing the chance to go two for two in Canada, Friesen was not discouraged.

“We had a really good race car here again tonight. I’ve never seen Matt run the cushion like that,” Stewart said with a grin and a glance towards Sheppard getting his photo taken. “He was probably just a tenth or a tenth and a half better than me. The long runs were tough in lapped traffic. He got held up and I got held up, so it was tough. This place is such a challenging race track and to have a second place here, I’m happy.”

For the second night in a row hot shoe and Series Championship contender Erick Rudolph was the “best of the rest” finishing behind Sheppard and Friesen. “Our trip to Quebec wasn’t too bad, you know a couple podium finishes against the best competition in Big-Blocks.” Autodrome Drummond has been good to Rudolph in the previous visits to the Quebec dirt track. “We’ve had some success here in the past. Last time I was here we won a race. I look forward to coming back again in a year and be a little better.”
When Danny Johnson took an unscheduled excursion off the turn one banking, the caution flag came out. Jimmy Phelps took the opportunity to change a tire and followed Johnson into the pit area. Phelps returned to competition, but late in the race Phelps was forced to pull the no. 98H into the infield with a terminal issue that ended his night.

The final caution of the night that set up the green-white-checkered was for Adam Roberts, who careened off the inside wall trying to pass Rich Scagliotta. Unfortunately for Roberts there wasn’t enough room and his left front wheel was sheered off.

The next race is on Saturday, July 28 at Weedsport Speedway. The Hall of Fame 100 will pay $10,000 to the winner as well as a guaranteed starting position at NAPA Super DIRT Week XLVII. The race is a part of a huge weekend in motorsports for Central New York. On Thursday, July 26 the DIRT Hall of Fame will induct in class of 2018. Then, Friday, July 27 the DIRTcar 358 Modified Series rolls into Brewerton Speedway for a 100-lap Feature. Saturday is the Hall of Fame 100 Super DIRTcar Series NAPA Super DIRT Week Qualifier, and on Sunday the World of Outlaws Craftsman Sprint Cars cap off the weekend at Weedsport Speedway.