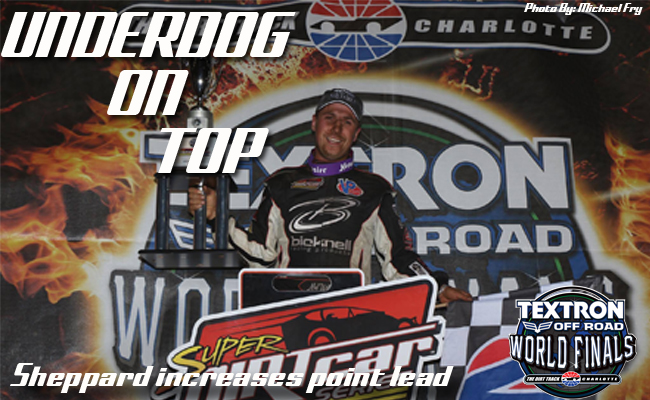 CONCORD, NC — Nov. 3, 2017 — A near capacity crowd at The Dirt Track at Charlotte Motor Speedway witnessed the underdog take on the Series Champ. At the end, it was the feel good story of Mat Williamson who wasn’t sure if he was going to race after losing an engine during Thursday Night’s qualifying. With the help of fellow competitors in the Super DIRTcar Series, the No. 6m was able to get back on track for the first night of Feature racing. Williamson made the most of his opportunity and knocked off Super Matt Sheppard to take night two at the Textron Off Road World of Outlaws World Finals.

Matt Sheppard received the best seat in the house when he drew the Frisbee with the pole starting position during the re-draw Friday Night. The driver of the No. 6m – Mat Williamson would line up alongside the Waterloo, NY driver and seemed poised and up for the challenge to take on the defending Super DIRTcar Series champion. The driver that swept the program on Thursday night would roll off the starting grid in the third starting position.

The first start of the race was called back after the No. 83 of Brian Swatzlander lost control of his Big-Block Modified in Turn 3. A second yellow flag slowed the field once again this time for the No. 32 of Jim Rasey with smoke trailing him from machine. Finally, the 29-car field would settle down and get some laps logged in the books.

“I knew Matt [Sheppard] would be right there, he’s a hell of a racecar driver. We had to capitalize on that restart,” said Mat Williamson.

The bigger picture was on the championship battle. Billy Decker would start the 40-lap feature from the 10th position. The Unadilla, NY driver quickly worked his way through the field was threatening for a top-three running spot.

“We 10th but the car was really good; digging and clawing, certainly not going to fall out of the seat, going to keep the elbows up and keep digging,” said Billy Decker. “I think we had as good of a car as anybody the last half of that Feature. Some of the lap cars were using a lot of the track and it was a lot about momentum and once you cleared them we were going ok.”

With the leaders entering heavy lap traffic, Williamson stuck to the top side the track with Sheppard closely in tow.

As the laps clicked down, Williamson that runs at Merritville Speedway in Thorold, Ontario, Canada and Lernerville Speedway in Sarver, PA was looking for another Super DIRTcar Series victory and a big one at that.

“This is pretty cool, there is a lot of people here,” added Williamson. “We’ve won some big races back home but nothing like this – this is pretty awesome.”

Entering Friday, the 6m team wasn’t sure how they were going to race after having a motor expire on them following qualifying on Saturday.

Randy Williamson [Mat’s Dad] told DirtTrackDigest.com on Friday, “We were going to use Justin Haers car, but then that changed. There was some discussion over the rules for a replacement car, but that got sorted out. Jamie Mills offered to drive a motor down from Delaware or we could use another car that he owned. Keith Flach offered a car, as did Justin Haers.”

Williamson and the No. 6 was able to get a motor on loan from the 99L team of Larry and John Wight.

“I gotta thank a lot of people, John, Larry, and Laura Wight, without them I wouldn’t have a power plant in that thing tonight,” said Mat Williamson “I can’t think everyone enough for the endless support in the pit area.”

While Sheppard was able to get close, Williamson was able to hold off Sheppard and take home the $8,000 payday and arguably one of his biggest wins of his career.

While Sheppard was able to bring home a second-place finish, he was able to gain five more points on Billy Decker as the Series heads into the final race of the season. With one race left, Sheppard holds a 37-point lead over Decker.

“It was a good run for us tonight, we just came up a few car lengths short but definitely happy with second,” said Matt Sheppard. “Congrats to Mat [Williamson] and his team. I guess we’re one race closer to the end here It will come down to tomorrow night – hopefully we can keep the wheels on her for 40 more laps and see what happens.”

Textron Off Road World of Outlaws World Finals concludes Saturday, November 4 with the the final day of the 2017 season. Both Matt Sheppard and Billy Decker are separated by 37 points as the two drivers aim to sit on top of the mountain as Super DIRTcar Series Champion. For information and ticket info, visit WorldofOutlawsWorldFinals.com