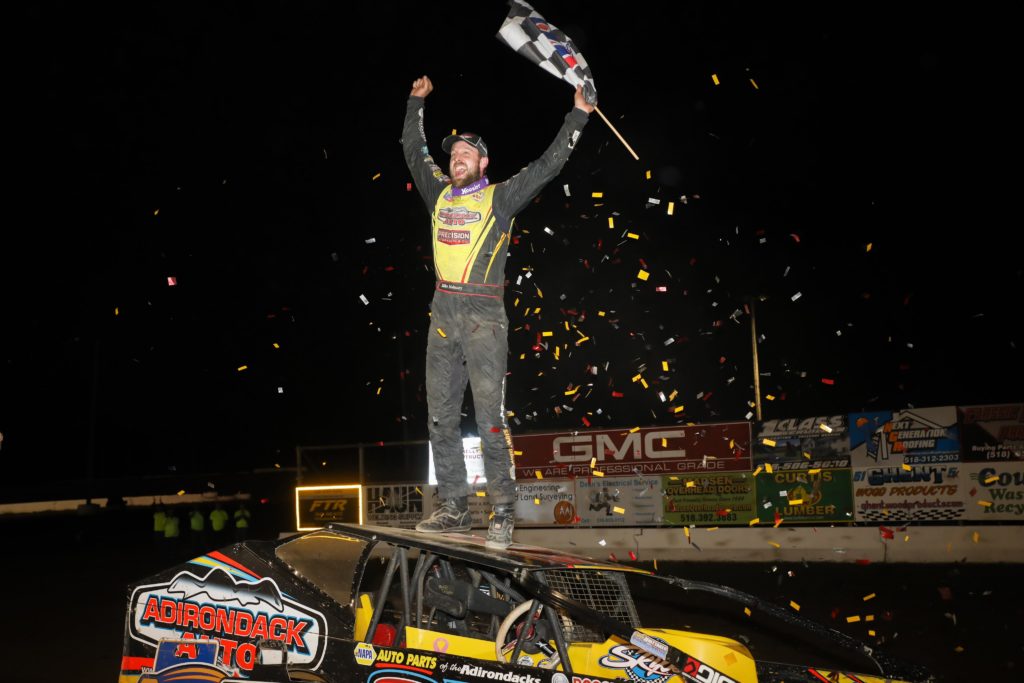 MALTA, NY – Mike Mahaney couldn’t help but dance while atop his Big Block Modified. The adrenaline, the joy and the relief moved through him in a way he’d never experienced before.

After 115 starts with the Super DIRTcar Series, the King Ferry, NY driver finally celebrated his first career Series win Saturday night. And he got to do so at his hometrack of Albany-Saratoga Speedway.

Mahaney, in the #35 Adirondack Auto Big Block Modified, held off two of the most prominent Big Block Modified drivers in the world for the $13,000 Massive Malta payday. Stewart Friesen finished second after charging up 19 positions and Matt Sheppard continued to build his bid for an eighth Super DIRTcar Series championship with his third-place finish.

With a handful of laps remaining, Mahaney and Friesen lined up side-by-side for a restart. Both cars fired nearly simultaneously out of Turn Four. Friesen sent his #44 sideways with a hard, clean slider. As Friesen balanced the car on the lip of the cushion on top of Turn Two, Mahaney turned down the track and was able to pass him back in Turns Three & Four.

Friesen used every inch of the track and every horsepower in his Big Block to steal the win but Mahaney hung on.

After crossing the finish line, weighing the car, and making his way to Victory Lane, Mahaney took his time standing on the roof of the #35 looking out over the thunderous crowd and the quiet track.

“I really wanted to let it sink in,” Mahaney said. “I’ve won races before and afterward, it felt like it happened so fast. This is a big one. It’s the most money I’ve earned in a race: $13,000. With it being my first Super DIRTcar Series win, it was just something I really wanted to take in up there.”

Mahaney stood on the podium many times with the Super DIRTcar Series but this time he’s in the middle.

“I am so glad it was those two on the podium with me,” he said with a grin. “I don’t know how many times I’ve stood next to them on the side. They are the very best in dirt modifieds. Right now in this era, they are the best. They are winning all the races. To finally get it and have them there means something super special for me. They didn’t drop out. We raced them.”

Mahaney is a second-generation driver. When Super DIRTcar Series announcer Shane Andrews called his first race, Jim Mahaney, Mike’s father, took the win. Winning with family and friends there to see and share it was a dream come true for the 32-year-old driver.

“I just want to absorb it because it’s taken so long,” Mahaney said. “It’s been my whole career, 17 years or something, but with this team, we’ve been competitive enough to the point where we should be winning. People have been asking me when it’s going to happen. It’s been something that everyone has been waiting for. All my fans, the team, and my family.

The electrified crowd roared when Mahaney took to the roof.

“It was cool to put on a great show for the fans,” he added. “I loved hearing them. It was nuts. It was so loud. It was so cool. I can’t even explain it.”

From start to finish, the track provided exceptional racing throughout the 100-lap event. There was a lane high and low, allowing for tight racing every corner and the occasional slide job.

“He [Lyle DeVore] gave us a track that had a lot of bite so it would last until the end,” Mahaney said. “It wasn’t like we ran 50 laps and then settled in. It was great racing for 100 laps. You can’t beat that. We have so many fans that follow us here. It was overwhelming to hear that response and to feel loved by so many. I truly appreciate it. I am going to enjoy this.”

Points leader Matt Sheppard finished third after racing his way up from the ninth starting position. The #9S stayed steady in the top 10 throughout the race until late in the race when he began picking off positions until finally reaching the podium.

“This place hasn’t been great to us the last few times we’ve been here,” Sheppard noted. “To come away with a podium is great since we’ve been on a roll. Our qualifying effort was great and we got a podium. We’ll certainly take it.”

Sheppard is working towards his eighth Super DIRTcar Series championship. At the mid-point of the race, Sheppard was locked in battle with Billy Decker who currently sits second in points. Sheppard managed to shake the Gypsum Racing #91 in the pack and build on his points lead going into NAPA Super DIRT Week XLIX and the NGK NTK World Finals with a third-place finish.

Stewart Friesen, from Sprakers, NY, had just returned from Las Vegas where he competed in the NASCAR Camping World Truck Series playoff race. The Halmar #44 was uncharacteristically off the top times in Hot Laps and Time Trials.

Friesen started the night out behind the eight-ball by failing to qualify through his Heat Race. He finished one position out of a transfer so he lined up next to Erick Rudolph on the front row of the Last Chance Showdown.

“The Halmar guys worked really hard all night,” Friesen said. “I was in Ronnie Johnson’s trailer grabbing springs and worked it out.”

With the ability to pass at every corner of the track for all 100 thrilling laps, Friesen worked his way from 21st to second to also claim the Hard Charger Award winner.

While waiting for Mike Makaheny’s celebration to subside, Friesen said, “That was some of the most fun I’ve ever had in a Modified. That was a helluva lot of fun. How about Mike Mahaney?”

While Mahaney started on the front row, he had to contend with Tim Sears Jr. for the early lead. Once the #35 was out in clean air, he began to stretch his lead. But soon, 2021 Albany-Saratoga Speedway track champion Anthony Perrego made some decisive moves to take the lead early in the race

Unfortunately for Perrego, after the halfway point something went amiss on the #44 and Perrego pulled his car into the infield with a rear-end failure. Mahaney inherited the lead from Perrego and never looked back.

Since 1972, 185 drivers have won Super DIRTcar Series Features out of thousands entered. On Saturday, Sept. 25, Mahaney became the 186th.

Around the corner: The greatest week of all of dirt racing is about to begin. Racing’s Biggest Party, NAPA Super DIRT Week XLIX (October 5-10), is set to kick off on Tuesday, October 5 at Brewerton Speedway for the $10,000-to-win Demon 100.