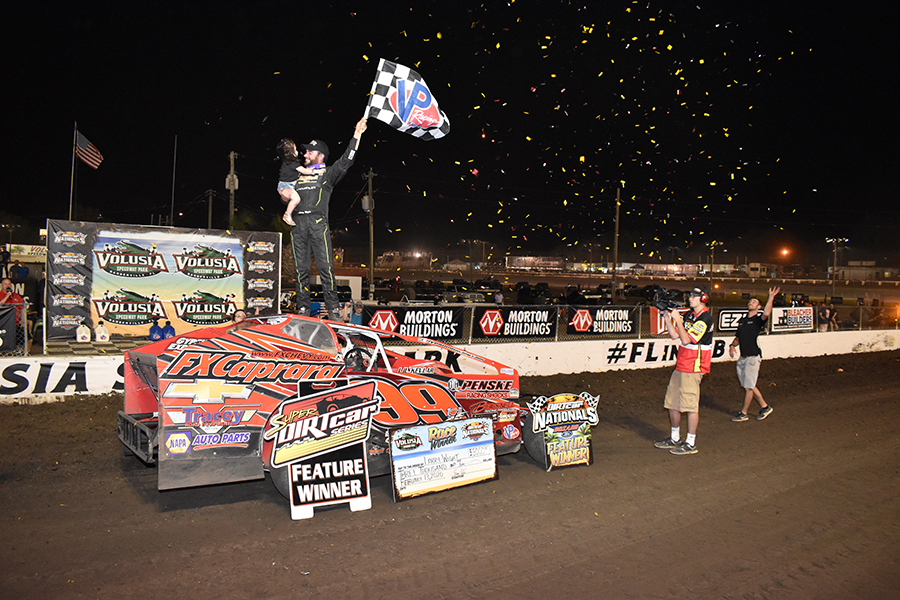 BARBERVILLE, FL – For the second night in a row, Lightning Larry Wight was showered in confetti on the front stretch of Volusia Speedway Park at the DIRTcar Nationals presented by Bozard Ford.

Both wins were mirrored by two other important factors: Larry Wight started on the outside pole and five-time NAPA Super DIRT Week Champion Stewart Friesen finished in his Hoosier Racing Tire tracks. The pilot of the No. 25R Erick Rudolph, from Ransomville, NY, took the final step of the podium.

“This car has just been on a rail,” said Wight. “We were fortunate enough to be able to put the same set up as we did last night. The track didn’t lay rubber or anything and we were still glued to it. We’ve got something rolling so I hope we can keep it going for the rest of the week. Hopefully, it will transfer to something up north.”

The 30-lap Feature began with Wight hard on the gas on the outside of pole-sitter Rick Laubach. Wight passed him on the opening lap with the same move he made the night before on Brett Hearn. Right now, Wight and his team have the car right where he wants it.

“The car is good enough that I don’t even have to run the cushion. It’s a wall over in 3 and 4,” noted Wight. To try and run that lap after lap without losing the nose or hurt the car is almost impossible. We were able to run about halfway below it, right on the crown where it kind of flattens off. It seemed to like it.”

Five-time NAPA Super DIRT Week Champion Stewart Friesen started fifth and quickly made his way to Wight’s tail. The race ran green until lap 13 when Tuesday’s winner and former Gator Championship points leader Mat Williamson broke a left rear shock. The Buzz Chew Racing team quickly changed the broken part and sent the No. 88 back into the fray where he made his way back up to 15th.

Friesen then lined up beside Wight on the lap 13 restart.

“Any time you have Stewie right behind you, you don’t want to see a restart. He’s phenomenal on restarts and he can usually make stuff happen. The farther I could keep him behind me the better.”

Friesen has probably had his fill of staring down Wight’s exhaust pipe, but his Halmar Racing team is adept at giving Friesen what he needs to win.

“These guys have been working really hard,” Friesen said. “ We’ve just got nothing for ‘em there. We’re going to take the day off and go run Daytona tomorrow and think about what we are going to do to this thing for Saturday because we are lacking a couple of tenths there and it showed. We’ll put it back together and come up with something.”

Rudolph is ready to take a couple of steps up the podium. Although the Gator Championship points standings show him in third, second place runner Stewart Friesen will be racing at Daytona International Speedway Friday, February 14 meaning Rudolph will likely overtake Friesen in points. Consistency is a huge part of Rudolph’s success.

“We had similar speed to Friesen,” Rudolph said. “We’ve had a decent car. I’m proud of our consistency this week. We’ve got two more races here and I’m looking forward to those. The team is really driving here.”

It was Sheppard who knocked out the quick time of the night clearing Time Trial runner up Wight by 3 tenths. After struggling mightily the past two nights, it looked like the 7-time Series champion had turned a corner. Unfortunately, there’s more work to be done as Sheppard slipped back in the field and finished seventh.

After a tough week, Demetrios Drellos, driver of the No. 111, finally cracked the top 10. Drellos ran well in Time Trials and finished second in his Heat Race to get into the Albany-Saratoga Speedway Redraw. Drellos’ 10th-place finish is his best of the week after fighting mechanical gremlins.

The fourth Super DIRTcar Series race of the Florida Tour at Volusia Speedway Park is Friday. If you can’t make it to the track, log in with DIRTvision and get a month-long Fast Pass to catch all the action live.