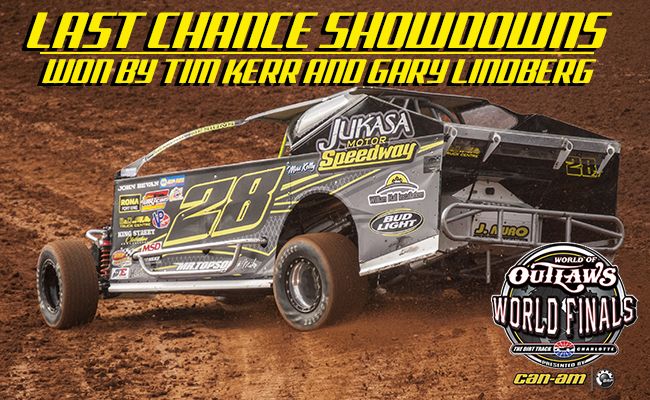 CONCORD, NC – November 2, 2018 – Despite the best efforts of the officials and teams, the 40-lap World of Outlaws World Finals presented by Can-Am Friday Feature race will be run on Saturday afternoon, November 3. Heat Races were completed on Thursday, Last Chance Showdowns were completed Friday, as well as the Dig Safely 811 Redraw. See below for the Feature lineup.

Tomorrow, Saturday, November 3, the pit gates open at 10:00 AM, grandstands open at 1:00 PM, and at 1:30 PM the remainder of Friday’s schedule will commence. Saturday’s schedule remains as it stands with opening ceremonies at 4:45 PM.

In last Chance Showdown number one, Tim Kerr held off fellow transfers Mike Maresca and Tim McCreadie for the win. Kerr caught lapped traffic Ed Kitchell late in the going and Maresca narrowed the lead, but Kerr was able to overtake the no. X machine and hold on. After getting socked with rain earlier in the day, the track was heavy and fast, although there was only one racing groove truly worked in. That made the lapped traffic a tricky challenge for Kerr to navigate.

Last Chance Showdown number two was won by surprise contender of NAPA Super DIRT Week XLVII Gary Lindberg from Ridgeway, Ontario. Steve Feder and Scott Hitchen took the final two transfer positions. Jeremiah Shingledecker was running second in a transfer spot when his motor let go coming out of turn two. Louie Jackson Jr. also struggled with the car and failed to qualify. Young guns Austin Langenstein and Jack Lehner made contact in turn three as Lehner went by. Neither driver were able to made a push to the front. 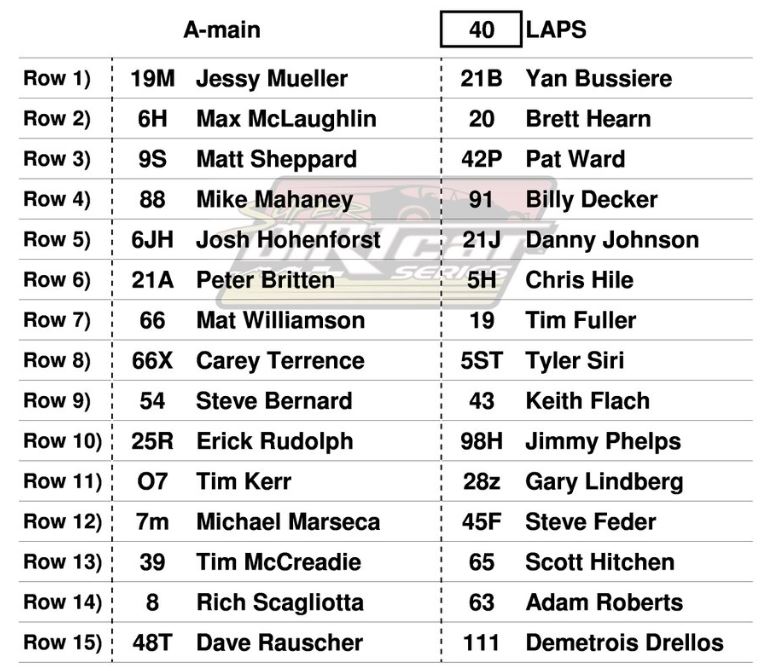