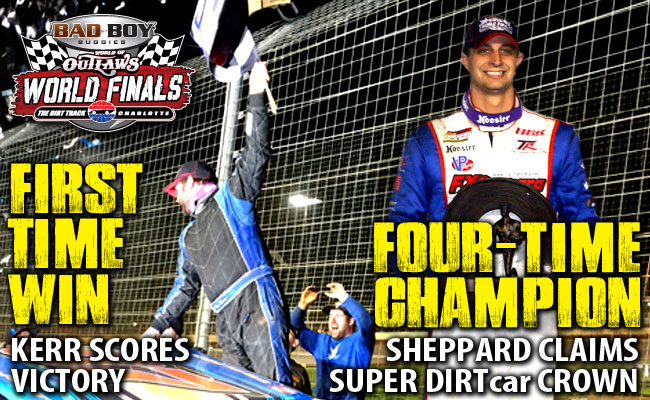 CONCORD, N.C. – Nov. 8, 2015 – For the first time in his young career Canadian Big-Block Modified driver Tim Kerr of Picton, Ontario, scored a Super DIRTcar Series win, and did so on Sunday night at the premier Bad Boy Buggies World Finals at The Dirt Track at Charlotte.

Kerr, who managed a 19th-place finish in the Friday night Bad Boy Buggies World Finals, utilized the Saturday rain date to work on his car and their efforts paid off with an $8,000 payday on Sunday.

“This is just awesome,” Kerr said in victory lane. “We are not going home for a day at least.”

Peter Britten of Brisbane, Queensland, Australia, jumped out to the early lead and held the point for the first 30 laps of the 40-lap feature. A slight shift up the track on lap 30 off turn two by Britten gave Kerr the opportunity for an inside power move that took him into the lead on the backstretch. Once in the lead, he was never seriously challenged on his way to the checkered flag. A jubilant crew, led by crew chief Zach Aubertine, greeted their driver in victory lane where Kerr jumped into their arms in celebration.

Britten settled for fifth after leading the most laps. Second-place finisher Sheppard worked his way forward, picking off cars one by one, from his ninth-place starting position. Finishing in positions three and four were Larry Wight in the Gypsum Express #99L and Danny Johnson in the Fingerlakes Livestock Exchange #27j.

Since 2010 when the Big-Block Modifieds joined the World Finals and its unique format of two feature events in the three-day program, seven different drivers have now won the 12 events held to date.

With only one caution on lap 18 for a SDS driver Keith Flach crash in the Gould Erectors # 43, all drivers had to be on top of the wheel to earn their finishing spots.

Last year’s SDS Champion Billy Decker finished second in the point battle with Jimmy Phelps finishing third, each maintaining the position they entered in at the beginning of the night.

For “Super” Matt Sheppard the road to his fourth Super DIRT Series championship has been a successful one with 27 feature wins and track championship titles earned in 2015 at Canandaigua Motorsports Park and Brewerton Speedway.

The champions’ victory lane ceremony was a real celebration for the HBR team.

“This feels good,” Sheppard said. “Al (Heinke) provides us with such great equipment and it is well prepared. Our crew is a great blend – some have been with me since the beginning.

Perhaps even more excited than Sheppard is team owner Heinke who has been involved in racing for many years. After many years of supporting talented drivers, the HBR teams of Sheppard and Phelps brought home two of the most coveted DIRTcar wins possible – the World Finals and a Super DIRT Week win by Phelps in the 358-Modified event.

Heinke was obviously humbled by the championship win.

“It is awesome,” he said. “Matt has a great team around him and we are really, really happy to have this championship. It’s just been a great year.”

Equally humbled and at the same time elated with his fourth championship, Sheppard noted the championship was Heinke’s first.

“I am so happy for him, no one is more deserving and I am more happy for Al and Judy than myself,” Sheppard said. “So many great people have been involved including Troyer (Race Cars) … I believe this is their first championship in 15 years and they are just as deserving.”

The DIRTcar Northeast Series championship banquet will take place on Saturday Nov. 21, in Syracuse, N.Y., at which time Kerr and Sheppard will be honored.