WEST LEBANON, NY – September 1, 2018 – 2018 has turned out to be a banner year for the Lebanon Valley Speedway fan favorite, and veteran wheel man Kenny Tremont Jr. This summer he was inducted into the DIRT Hall of Fame in Weedsport, NY and now he is this year’s Mr. Dirt Track USA. Tremont, who started in seventh position, won fierce battles with second place Brett Hearn and third place Mike Mahaney. His perseverance paid off with a $25,000 grand prize as well as a guaranteed starting position at the 47th annual NAPA Auto Parts Super DIRT Week.

Tremont was stunned by how good his car was and that he was standing in Victory Lane with race announcer Shane Andrews. This was his fifth Mr. Dirt Track USA of his career, but his last one came in 2005. “What a race to win,” exclaimed Tremont, “My gosh, the money. I was just trying as hard as I could.”

During the race, Tremont thought back to a Mr. Dirt Track USA title that slipped away and he knew he could not allow that to happen again.
“I gave away a race here a couple years ago. I lead it for 80-90 laps and got loose and wound up third. I was chasing the 88 and he was pretty good, but I said you know what, let’s just cool it here a minute and see what happens, because I didn’t want to be in the same spot I was a couple years ago, with no tires and the tail out, and guys going by me on the bottom,” described Tremont. 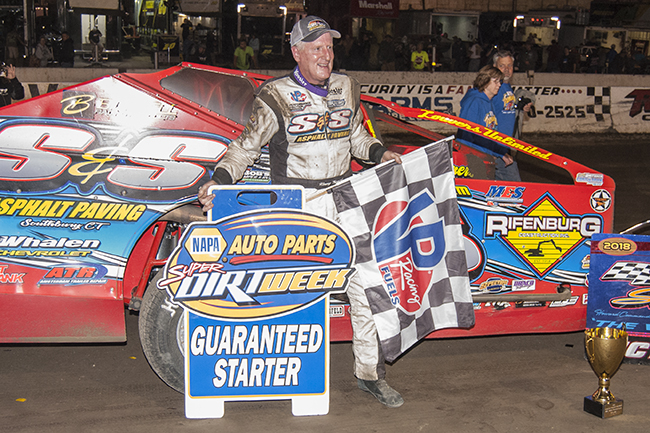 The no. 115 Team put was in maximum attack mode both on the track and in the race shop. Tremont thanked Gary Waters and Joe Matthews’ team. Tremont heaped praise on his team, “They bought a new Bicknell car and it ran really well. They put a fresh engine in tonight and boy they nailed the handling.”

The initial start was almost a disaster as outside pole-sitter Jimmy Phelps had difficulty getting up to speed. Coming off of turn four, the field went full speed but Phelps did not. The no. 98H fell back into the field as drivers had to take evasive action to avoid a chain reaction accident. The Big-Block Modifieds went three-wide with the hammer down on the backstretch before they sorted themselves out, bringing the crowd to its feet. After a little caution fever, the 31-car field began ticking laps off, and that’s when the strongest cars made themselves known.
On the early race restarts, Tremont was able to get into second place and from there he turned up the pressure on leader Mike Mahaney lap-after-lap. Finally, exiting turn two, Tremont pulled alongside the no. 88 Buzz Chew Big-Block Modified and they drag-raced to a dead heat entering turn three. The no. 115 was on the inside and managed to stick it for the winning pass.

Mike Mahaney, who placed third, was happy to be in the hunt with two of the best Lebanon Valley Speedway drivers ever. It took a team effort to put him up front. Mahaney noted, “These guys at the Buzz Chew Team gave me a great car tonight. I gotta thank all of them. They worked really hard all week getting this thing ready. I’m excited for big things to come. This is probably only the second time I’ve run this whole race and to be on the podium feels good. I started getting a little loose there at the end, but still a good run. Great to be here at LVS. It’s a great track, lots of fun.”

Runner-up Brett Hearn was racy all night and appeared to be a contender for the win. Hearn worked over Mahaney until he eventually passed him on the low side. Unfortunately for Hearn, Mahaney’s strength on the top line meant Hearn would need to use his tires up to make the pass on the bottom. Once successful, the Madsen Motorsports no. 20 struggled to stay with Tremont.

“Having to start third on the inside was killing me. I tried to save the right rear, but in the end I just didn’t have enough left to mount a challenge. I was trying to cut the corners and see what feels best. The track is changing the whole entire 100 laps. You are constantly trying to tweak your line to get your car to feel as good as it possibly can. When you get to another car and off-line a little bit, you gotta keep working that and working that. Having to work the bottom as long as I did against the 88 probably hurt that right year more than I wanted to. Once Kenny slipped by him into the lead, I just didn’t have anything left.”

Birthday boy Brett Hearn had his eyes on the prize, but fell just short. However, Hearn needs to start stringing together strong top 5 finishes if he’s to move back up in the points standings, so a second place isn’t a bad birthday present.

Each of the top five drivers in Series points had difficult days. Championship leader Matt Sheppard finished a solid seventh, but that was after suffering a flat left rear tire with less than 20 laps to go. He benefitted from putting a softer compound tire on for the short run and made his way back inside the top 10. Rival Erick Rudolph, second in points, struggled throughout the day. He failed to qualify through his Heat Race and his Last Chance Showdown, so he required a provisional to make the Feature. However, Rudolph was salvaging the day but unfortunately the no. 25R broke a fuel pump to end his day.

The HBR Motorsports stable struggled as well. Young gun Mad Max McLaughlin also missed out on qualifying through his Heat Race and Last Chance Showdown. After using a provisional to start, McLaughlin eventually pulled the no. 6H to the pit area with steam pouring out of the engine compartment. Teammate Jimmy Phelps, was solid throughout the day. He made the Dig Safely NY 811 Redraw and started on the outside pole. However, when the field took the green flag, the no. 98H failed to launch, and the field rushed passed him. Phelps leveled out and maintained a top 10 until a late race flat tire dropped him to 16th.

Finally, Danny Johnson, who sits fifth in points, also had a poor showing. He was slow in Time-Trials, finished in the back of his Heat Race, and spun in the Last Chance Showdown after contacting Dave Rauscher between turns three and four. Johnson managed to survive though and came away with a fourteenth position.

On Monday, September 3, the Series returns to Weedsport Speedway for their final stop at the historic 3/8-mile track. The Labor Day Double Play pays $700 to start and $8,000 to win. The race also awards the winner (or highest finisher without a guarantee) a guaranteed starting position at the 47th annual NAPA Auto Parts Super DIRT Week. Join us at the track or if you can’t make it, tune in with our partners at FloRacing.com. So far Stewart Friesen, Max McLaughlin, Matt Sheppard, Erick Rudolph, and now Kenny Tremont have guaranteed starting positions at NAPA Auto Parts Super DIRT Week XLVII.