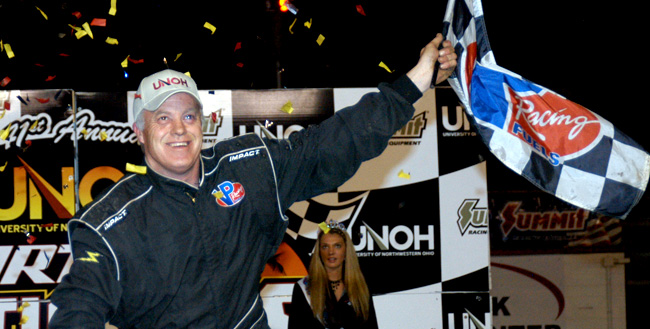 BARBERVILLE, Fla. — Feb. 23, 2012 — Thursday was a dominant night for Danny Johnson; it just took a little longer to get over than he wanted.

“It seemed like a long race for me,” he said with a grin. “When you’re leading a race it seems like it takes forever to get over with. But when you’re in the back going to the front it seems like 30 laps goes in a hurry.”

The dominant performance began in qualifying when Johnson was not only the quickest in his session, which earned him the pole for his heat race, but he was the fastest overall with a top lap of 17.441 seconds.

Johnson then led all eight laps to win his heat – the second on the track – which started him on the outside of the front row for the feature that was aligned heads up.

“Night and day difference,” Johnson said. “I put a lot of tearoffs on my helmet just in case I didn’t get the lead, but I didn’t have to use all my tearoffs and didn’t get any mud in the car.”

That’s because Johnson took the lead on the initial lap from polesitter Tim Fuller and never looked back. He maintained the high groove throughout the race and chose the outside line on each of the eight cautions that dramatically slowed the race.

“It was very fast up there,” Johnson said. “When you have a cushion on a rainout like this, you put the right rear tire up on that cushion and the car is like on a rail all around the race track. It’s hard to beat a cushion when there’s a cushion.”

Laubach and Friesen each brought out a caution in a race that didn’t go longer than seven laps without a yellow or red flag. With Wednesday’s UNOH DIRTcar Nationals Presented by Summit being washed out and scattered showers throughout early Thursday, the track stayed very fast throughout the night. In fact, Johnson posted the quickest time in the feature, which was 0.15 faster than his qualifying time and was an average speed of more than 104 miles per hour.

“The rainout from last night and the rain from today with no sun today made it extremely fast,” he said. “It was a little rough because the track wasn’t wide. I could pretty much hold it wide open all the way around. With a big-block modified, that’s a lot of power getting to the race track.”

The victory was Johnson’s first at Volusia Speedway Park since Feb. 17, 2007, and was his 12th career big-block modifieds win in Florida – second only to Brett Hearn, who finished 11th Thursday after sustaining a flat left rear tire while running second on lap 18.

Polesitters Fuller, Johnson and Alan Johnson, and Storms, who started outside the front row, each claimed a heat race victory.

Scagliotta and Brian Truppi both won a Last Chance Showdown.

The competitors will return to Volusia Speedway Park for a doubleheader tomorrow – Friday – beginning with Wednesday’s rained out program in the afternoon. The front gate opens at 11 a.m. with racing shortly after and the night event will follow as regularly scheduled.

Tickets for the remainder of the 41st annual UNOH DIRTcar Nationals Presented by Summit can be ordered online by clicking WorldofOutlaws.com/tickets, by calling 877-395-8606 or purchased at the track.