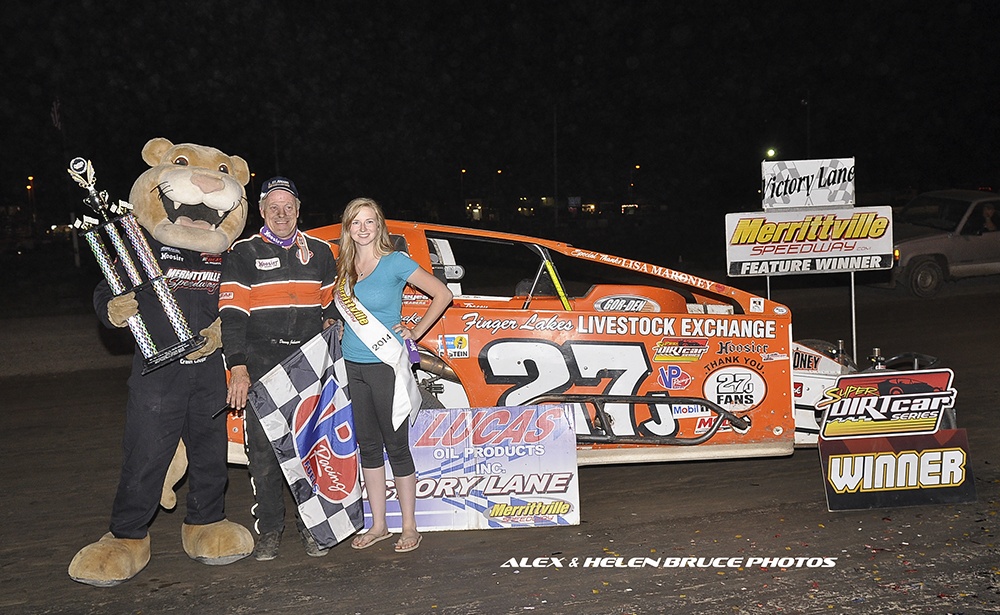 “It feels awewome,” said Johnson, who is fresh off an impressive victory at Albany-Saratoga Speedway in Brett Hearn’s ‘The Big Show 6′ presented by Recovery Sports Grill, Ferris and VP Race Fuels. “I just tried staying focused and got good laps.”

After finishing second in his heat to 2012 race winner Mike Bowman, of St. Catharines, Ontario, and drawing the pole for the feature, Johnson admitted that some good fortune played a role in his success Monday night.

“We drew the pole, and that makes life a lot easier. It’s a lot of luck,” said Johnson, whose redraw position started the Traction Grabber / Bicknell Racing Products No. 27J on the front row and helped Johnson pilot his ride to the initial lead.

However, in a long-distance race fraught with a lapped traffic on the challenging one-third-mile, D-shaped Merrittville track, it would take more than luck to keep Johnson ahead of the stout field of contenders. Series regular Billy VanInwegen, of Sparrowbush, N.Y., gave chase to Johnson at the green flag, and by lap 8, Chad Brachmann, of Sanborn, N.Y., had taken over the second spot and was running wheel-to-wheel with the leader in turn 3.

Johnson shut the door on Brachmann, but a lap-11 caution brought the two back together for a double-file restart. Brachmann’s No. 3 was fast on the high side and claimed the lead, but Johnson roared ahead to take back the top spot in lap 20.

“I had a little trouble with the 3 car, it seemed to be about the same speed,” said Johnson, whose years of experience, which include four prior career Super DIRTcar Series victories at Merrittville, helped him triumph. “This is a slippery track, so to speak, with low abrasion, so we had to put a lot of bite in the car to get the bite that we needed. It worked out really well for us.”

In lap 32, the No. 3 of Brachmann spun out to bring the second caution of the race, but Brachmann’s misfortune did not mean smooth sailing for Johnson. Bowman was finding some momentum, and off the next double-file restart, he charged from fourth to second place.

Yellow flag conditions returned to the track in lap 38 with the Mercer Milling Company No. 19w of Justin Wright and the Carey Industries No. 108 of Bill Bleich turned around. The field returned to green in lap 42 and Johnson maintained his lead and soon after started to pull away from the rest of the field.

Lapped traffic in lap 60 posed a challenge for the leaders, with slower cars ahead giving Bowman the opportunity to gain ground on Johnson. Soon thereafter they were racing side-by-side, but Johnson pulled ahead and stayed there until Bowman was able to close the gap again in lap 91.

“I was trying to show Danny a door to try to make him get a little more desperate working the lapped traffic, maybe cause him to makes some mistakes or something,” said Bowman. “But he’s as cool as a cucumber, he doesn’t make too many mistakes.”

Even a last-lap challenge by Bowman left Johnson undaunted, with just a half-car-length lead at the checkered flag, enough to for Johnson claim to claim another thrilling series victory.

Bowman finished second, and, after a tough season thus far running weekly at Merrittville, he was happy to claim the runner-up spot in one of the track’s biggest races.

“This pretty much redeems our whole season,” Bowman said. “We’ve been struggling here a lot, but coming in second to Danny Johnson feels almost as good as winning did two years ago.”