“It’s good,” Phelps said. “It takes the edge off a little bit naturally, just getting back into Victory Lane in a big tour race. I think it may have been a year or so since our last Series points paying win. So, this is kind of nice so we can knock the monkey off our back…and start to rack them up a little bit. It’s a tough crowd. You know, obviously to do it at home and in front of all our sponsors, employees, and boss man Al Heinke, that makes you feel good all in all.”

He notched a Series victory at the DIRTcar Nationals in February; however, it wasn’t for points. Following that, during the championship season, his best results were four top-10 finishes in seven starts. Then, Monday night, the Baldwinsville, NY driver finally found his way to victory again.

After finishing third in his Heat Race, the veteran driver drew second to end up on the outside pole position for the night’s Feature. Phelps came out firing, taking the lead by Lap 8 and gapping the field.

He cruised along, looking in his element around the 3/8-mile track for almost the next 40 laps before the first caution of the race on Lap 46. On the restart, Phelps found himself side-by-side with eight-time and defending Series champion Matt Sheppard – who had already charged up nine spots.

Phelps didn’t waiver though, grabbing the lead after the restart, again proving he was the car to beat. He would continue his flawless execution, even after a second caution was thrown on Lap 70 after a minor collision between two cars in Turn 4.

Sheppard wisely navigated his way through lapped traffic but was still several car lengths behind Phelps after the first restart. He fended off challenges from Dave Marcuccilli to keep hold of second place, but another challenger was still to come.

Mike Mahaney of Kings Ferry, NY, started on a late race surge after the second restart. He lined back up in sixth place but wouldn’t be there for long. He moved up two positions within the next six laps, and then took only 10 more to move into fourth.

It wasn’t long before he set his sights on Sheppard. After several hard-fought battles around the 3/8-mile oval, Mahaney was able to edge by Sheppard for second, bringing a handful of people in the stands to their feet. 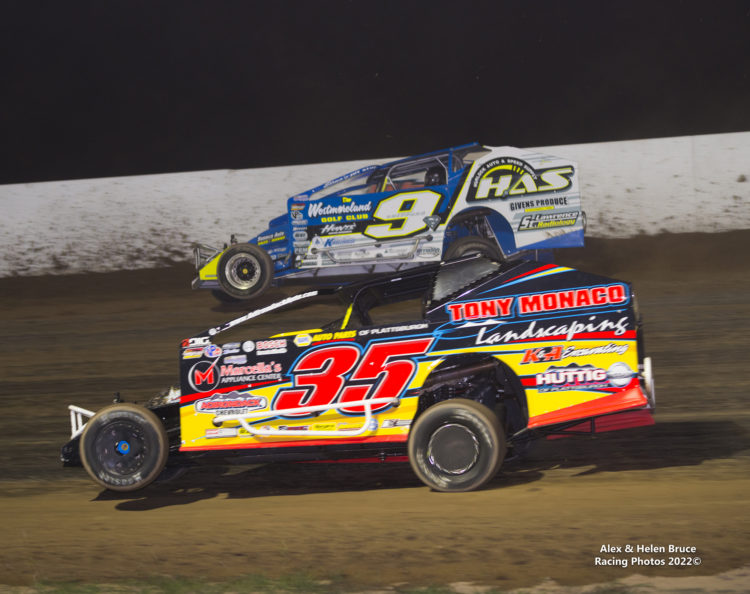 “That was pretty cool,” Mahaney said.

“It was good racing here at Weedsport. I kind of rolled up on him on the bottom but I saw we were coming up on that car on the bottom. So, I figured that was my time to go to the outside and make my move. I think I just did it, like, one corner earlier than he was going to and I got to get up next to him and pin him in there. It was super clean. It was great. Great racing and happy to be able to race with Matt.”

Phelps continued unchallenged for the final 30 laps, taking the checkers for the first time in a Series competition since winning at Fulton Speedway in 2020, while Mahaney was second and Sheppard third. Marcuccilli finished fourth and Chris Hile rounded out the top five.

After the celebrating subsides, Phelps will now have to consider how the guaranteed starting spot at the 50th Running of NAPA Auto Parts Super DIRT Week will influence the rest of his season.

“Confidence is half the game,” Phelps said.

“I think this will help that with everybody. It gets everybody all jacked up. We’re going into a couple of racetracks that we really like, Brewerton, which is our weekly track, and Fulton, which is probably my favorite track on Earth. So, we’re looking forward to the next couple of nights.”

He has also taken the early lead in the overall SummerFAST championship standings.

UP NEXT: The second round of SummerFAST will be at Brewerton Speedway, Tuesday, Aug. 18. For tickets, CLICK HERE.