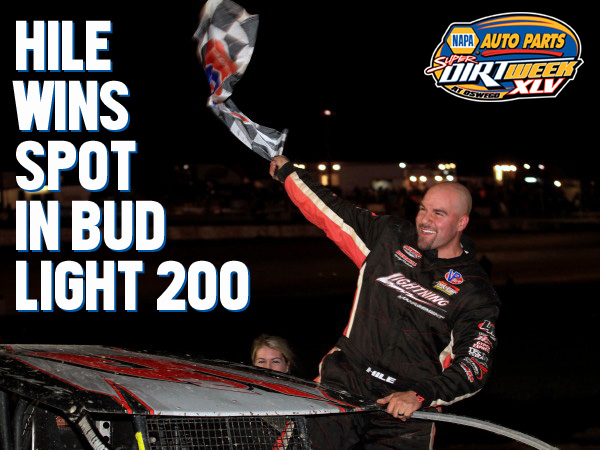 The annual Kenny Wallace Racing Experience Win-And-You’re-In race at Fulton Speedway is a part of Super DIRT Week which guarantees the winner a starting spot in the distinguished Bud Light 200 at Oswego Speedway.

Hile has competed in the Win-And-You’re-In race for several years and finally captured his first victory Saturday night. “You know it’s really neat. First and foremost hats off to the track crew. They did an amazing job to get the track done for us,” Hile said in victory lane.

Kyle Weis and Chad Phelps led the 22-car field to the green as Phelps ran the topside and took the lead as they clicked off lap number one.

Phelps chose the topside on the lap three restart as Hile showed his nose underneath but Phelps was able to gain a few car lengths.

Hile dove under Phelps going into turns one and two, pulled Phelps down the backstretch and exited turn four as the new leader on lap seven.

Hile chose the bottom line on the final restart of the night and once again had a great run but a two-car battle was brewing behind Hile with Phelps and Varin for second.

Varin then put his nose to the outside and drove right around Phelps in turns one and two and clicked off the tenth lap in second.

Hile led Varin, Phelps, Tom Sears and Ryan Susice to the halfway mark. He was using every inch of the cushion as Varin rode the bottom trying to real him in. Three laps were left on the circuit as Hile closed in on lap traffic. That didn’t slow Hile up as he sliced his way through.

Varin picked up some speed and gave Hile a good run but it was all Hile as he drove his Lightning Management No. 5H machine to the checkers.

“I didn’t really know whether to be on the top or bottom or where to go. I could see I had speed on the bottom on that restart. I knew if I could pick him off on the bottom I knew we had a good enough car to beat him. It was all about momentum and keeping the speed up,” Hile said.

Race Notes: Twenty-two Big Block Modifieds attempted to qualify for the win-and-your-in Super DIRT Week race and twenty-two started the main event. There was one red and three yellows brought out during the feature.

The Super DIRTcar Series will be back in action on Saturday Oct. 15th at Brockville Ontario Speedway for the 1000 Islands RV DIRTcar Northeast Fall Nationals.