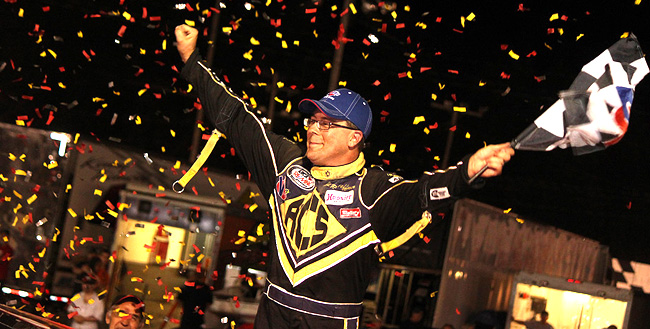 After a persistent rain postponed the event one-week from its original Aug. 25th race-date, the Super DIRTcar Series returned with a healthy field of 44 Big-Block Modifieds, filling the pit area in front of a huge crowd.

Former Mr. DIRT Track USA champions Heffner and Billy Decker led the 32-car starting field to the green flag. Heffner grabbed the early lead with Decker and Andy Bachetti in pursuit, creating an early 3-car breakaway at the front of the field.

Heffner, Decker and Bachetti thrilled the crowd as Decker attempted to pass Heffner on the inside and outside, but could not clear the A. Colarusso & Son-sponsored 74-car.

As the top three pulled away from the field, Matt Sheppard made his presence known, immediately working his way from 10th starting position into the top-5. Sheppard continued his charge, making quick work of Ronnie Johnson to take the fourth.

Lapped traffic became a factor early, as the torrid pace set by the leaders saw them enter traffic by lap-10. After struggling to put a lap on Tim Currier, Heffner proved to be the master of lapped-traffic early, opening up a slight margin over Decker and Bachetti.

Current Lebanon Valley points leader Kenny Tremont’s frustrating night came to an end on lap-15, as the 12-time track champion pulled off on the back stretch.

Mechanical issues would prove to be a major story in the race. Tommy Sears was the first to encounter motor woes, coming to a stop and brining out the yellow on lap-19.

The ensuing restart saw Bachetti make a daring outside-move into Turn 1, which proved to be costly, as the Steve Hough-owned 34 car hopped the cushion and made contact with the outside boilerplate, dropping him back to seventh in the running order.

The chaos continued as defending Super DIRT Week champion Stewart Friesen ended his top-10 run with mechanical problems on lap 27 on the front stretch, and on the same lap off of Turn 4 second-place running Billy Decker blew a motor, ending his bid for another Mr. DIRT Track USA title.

After Danny Johnson stopped to bring out the caution flag in Turn 4, Ronnie Johnson would be the next driver to experience engine problems, as heavy smoke poured from his Big-Block Modified, ending his night while running in third.

The onslaught of mechanical issues shuffled the leader board. Heffner continued to lead, but it was Matt Sheppard who inherited second, with Donnie Corellis, Bachetti, and Brett Hearn, coming from 11th starting spot, rounding out the updated top-5.

Heffner appeared to be the car to beat, as he had built up a huge advantage on the field and was stretching his lead running a consistent and smooth line around the speedway.

A lap-47 caution for Brian Berger coming to a stop didn’t slow down Heffner, and despite Sheppard starting alongside on the restart, Heffner was again able to open up an advantage.

Bachetti and Hearn were looking to dethrone Heffner as the leader, as both drivers continued their methodical charges through the field. Both drivers snuck around Corellis on the restart, and soon both drivers were able to pass Sheppard for second and third.

Despite two-late race restarts, Heffner was able to hold off the advances for his second-consecutive victory in the late-summer classic. Hearn, who passed Bachetti on a lap-87 restart for second, Bachetti, Sheppard and Corellis rounded out the top 5.

With the mechanical problems, Decker’s lead has now fallen to just 9-points over Sheppard, and 73 over Hearn in the overall Super DIRTcar Series championship standings as the series heads Sunday to CMP Presents Weedsport Speedway.