Hearn – with authority – at Drummond 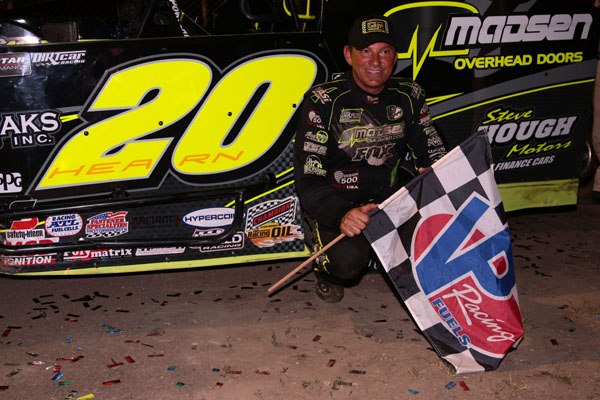 The eight-time Series champion, who didn’t have a podium finish in the first eight races, came off the hauler swinging on the Drummond 3/8 mile.

Hearn took the Pole Position Raceway Fast Time Award, won his heat race, drew the pole in the Dig Safely NY Call 811 redraw and held the lead from start to finish despite having several long leads negated by restarts.

He was challenged briefly by runner-up Matt Sheppard after the seventh caution on lap 66 for Mario Clair, who rode the frontstretch wall on two wheels for a spell after contact with Carey Terrance.

Sheppard’s second-place run was sufficient to put him in first place in the SDS point standings after beginning the night in a tie with defending champion Billy Decker, who struggled to a 26th-place finish.

“I started out too tight, but finally got up to second,” Shepard said. “I thought I have something for Hearn, but he just drove away from me.”

Fan favorite Steve Bernard of Granby started 19th and finished third at Sheppard’s bumper. Jimmy Phelps rose as high as second before settling for fourth ahead of Dany Bilodeau of Victoriaville, QC.

The second half of the top ten consisted of Larry Wight, Danny Johnson, Yan Busssiere, Sebastien Gougeon and Mat Williamson.

Hearn quickly built healthy leads each time the green came back out except for one three-lap scrum with Sheppard after Clair’s demise.

“We had a fantastic car,” Hearn said. “It was a perfect night. The second turn was a good one for me. Some of my best fans are from Quebec. I love this trip.”

Larry Wight kept Hearn in view for over a dozen laps in the first third of the race after starting 10th. He turned the second fastest lap of the race, but when he washed up to the rim in turn two on lap 39 he was passed by Johnson and soon, Bernard.

Johnson held onto second for 20 laps before Sheppard took it over. Phelps and Bilodeau closed strong in the final 10 laps to complete the top five. Phelps had one appearance on the front row with Hearn, but couldn’t stay in close contact.