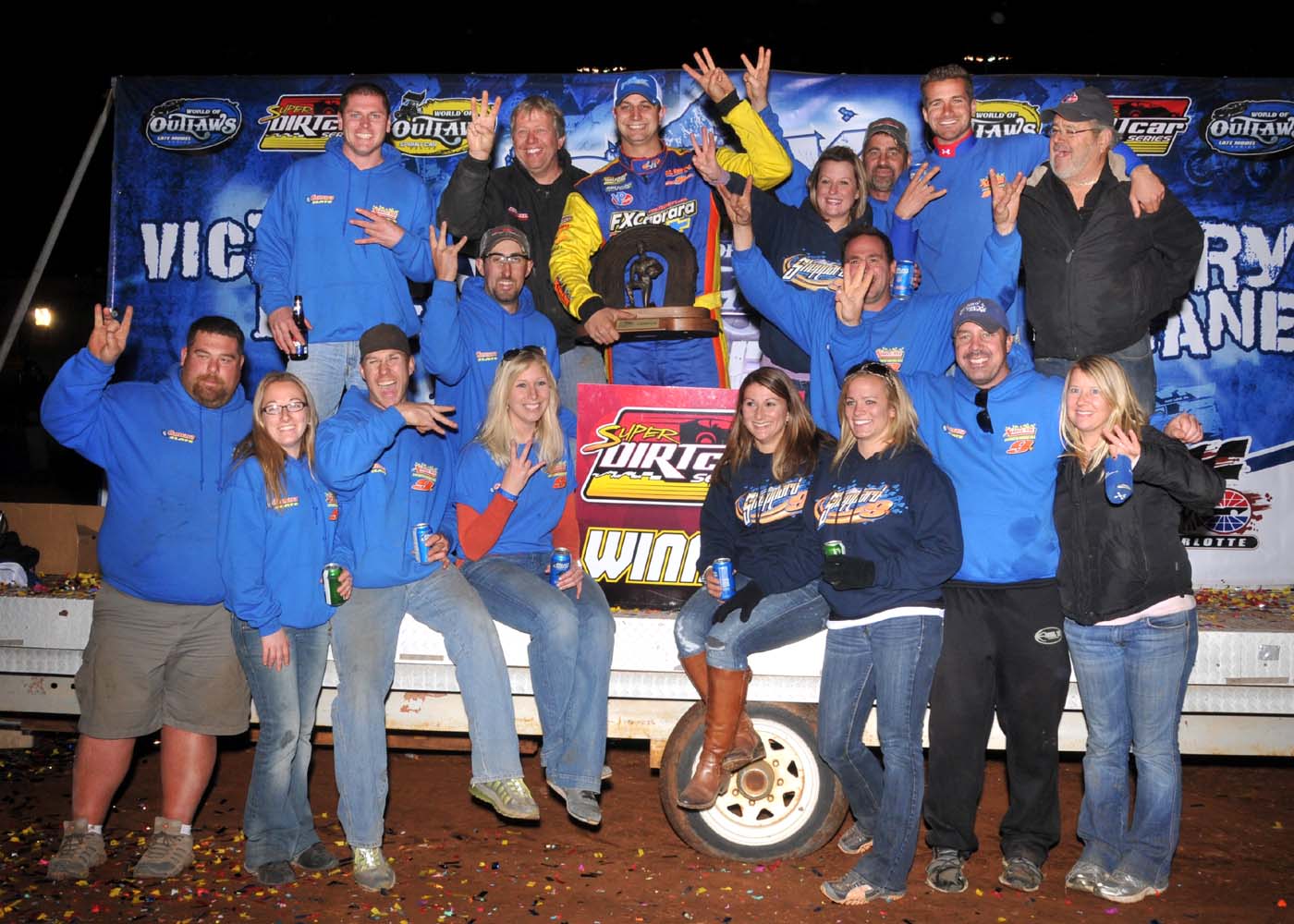 CONCORD, N.C. – Nov. 4, 2012 – Brett Hearn’s performance late in the 2012 Super DIRTcar Series season has been anything but anticlimactic. He capped off a stunning season Saturday, Nov. 3, with a victory in the series finale during PEAK Motor Oils World of Outlaws World Finals presented by NAPA Auto Parts at The Dirt Track at Charlotte.

Hearn’s season went from good to great in August after returning from an illness-related two-race hiatus to start 23rd in the field and charge to the win at Lebanon Valley Speedway for Mr. DIRT Track U. S. A. From then on it kept improving, with his sixth VP Small Engine Fuels victory at the New York State Fairgrounds in Syracuse, a win in Orange County Fair Speedway’s Eastern States 200, and this most recent victory takes Hearn’s great season to another level.

“We worked hard to get here,” said Hearn, of Sussex, N. J. “I’ve wanted to win this race for quite a while, for the last few years we’ve been coming here.” (Hearn by Jason Shank; Sheppard by Travis Branch)

Drawing the fourth spot on the starting grid, Hearn was in a good position to earn a strong finish. However, the competition was tough, with multi-time Australian V8 Modified National Champion Peter Britten starting on the pole, Jimmy Phelps, second in points, starting second, and two-time series champion Matt Sheppard starting third.

Britten took the initial lead at the green flag, but a pile-up in turn three brought out the red in the first lap. Bob McGannon’s 21m rolled over, but McGannon was able to drive it to the pits. Ryan Godown, and Tom Sears, Jr., were involved but were able to continue racing; Rob Bellinger’s 8R, Billy Decker’s 91 and Matt DeLorenzo’s 3d were towed to the pits.

Keeping the lead at the restart, Britten powered ahead, leaving Matt Sheppard and Jimmy Phelps to battle for second, until Hearn passed them both. When Britten reached traffic in lap 12, maneuvering lapped cars slowed the 21a and Hearn started gaining an edge until the yellow flag waved in lap 13.

Britten again led on the restart, as well as one soon after in lap 14, but Hearn followed close, trying to take the Aussie on the far outside of every turn in the 4/10-mile oval. The race continued caution-free for 20 laps, with leaders reaching traffic in lap 25. Sheppard joined the battle for first in lap 31, racing three-wide with Britten and Hearn through turns three and four until Hearn sped ahead of both on the front straightaway.

Hearn maintained the lead through the remaining laps, surviving one late-race double-file restart. Britten kept his challenge strong, but wasn’t able to regain the lead and settled for second.

“Brett was obviously very good, and as the race went on he didn’t really fade too much,” said Britten, of Brisbaine, Queensland, Australia. “I sort of faded just enough so he could get by. Brett’s pretty hot at the moment, so to get beaten by him – as I said once before, he’s been racing longer than I’ve been alive. It’s an honor to race in front of a big crowd like this, and to be on the podium with Jimmy (Phelps) and with Brett. Those two guys are pretty good.

“We’re still learning, and we’re going to keep learning and keep getting better,” continued Britten, who raced for the first time in the Super DIRTcar Series in 2010. “Sometimes you get a little too carried away making setup changes all the time – you really just have to find those couple little things that work for you and then just drive the car. These cars are all about driving the car, so once you have that figured out you’re going to go a lot quicker.”

A second-place finish in one of the biggest Big-Block Modified races of the year is certainly nothing to laugh at, and Britten hopes it means he’s found his groove going into 2013.

“We’ve definitely been getting into some good stuff in the later part of this year,” he said. “This is a testament to it down here, and hopefully we can keep that momentum going into next year.”

Hearn was happy to improve upon his third place finish Friday, Nov. 2, a finish that took him from third in series point standings to second.

“We made the right calls,” Hearn said. “We knew we were close, and we just had to get a little tiny bit better, and we did just what we needed to do.”

Hearn’s victory was not enough to oust Sheppard, who led by 60 points going into Saturday’s race, out of the point lead. Sheppard left the track with a fourth-place finish and an unprecedented third consecutive Super DIRTcar Series Championship title.

Rounding out the top five in Saturday’s feature were Jimmy Phelps in third and Tim McCreadie in fifth.