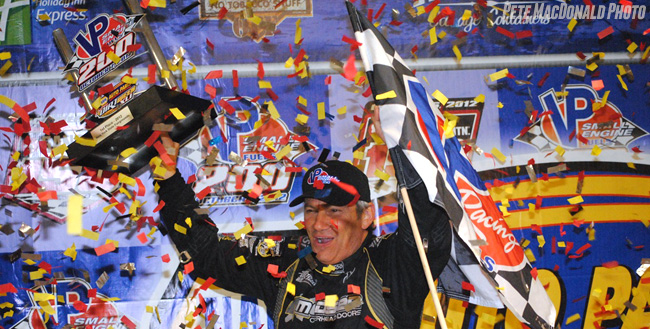 Hearn, 54, of Sussex, N.J., captured big-block Modified racing’s most prestigious event for a record sixth time when DIRTcar officials declared the race official after 113 laps due to increasingly heavy precipitation that slickened the one-mile oval. But it was his first win in the race since 1995 – a 17-year span between checkered flags that was filled with frustration and heartbreak and made his return to the spotlight a sweet reward.

“You keep on doing this long enough it’s gotta turn around and come back your way, right?” said Hearn, who has started the VP Small Engine Fuels 200 for 35 consecutive years. “I won the thing five times in 11 years (from 1985-95) and thought, ‘Man, it wasn’t that hard after all.’ And then the next 16 years I realized not only is it hard to win the race, it’s hard to finish the damn race. This puts it all in perspective.”

Hearn dominated the scheduled 200-mile event, taking the lead from polesitter Billy Decker of Unadilla, N.Y., on lap five and holding it through the early conclusion. He decided to forego a pit stop during the race’s first half when his crew realized that wet weather was moving in and the gamble paid off.

When the 200 was red-flagged and the field brought onto pit road on lap 113, Hearn led a group of five drivers who had not yet pitted. All of them were running low on gas and would have had to come in for refueling if the race had restarted, but with rain overtaking the area and dusk approaching DIRTcar officials made the decision to end it after a wait of about half an hour.

It was just the second time rain shortened the VP Small Engine Fuels 200 in the event’s 41-year history. The 1992 race won by Richie Tobias of Annville, Pa., was cut to 135 laps by the weather.

Matt Sheppard of Waterloo, N.Y., was credited with a runner-up finish after he inherited the spot from Tim Fuller of Watertown, N.Y., who ran out of fuel and pitted under caution one lap before the race was red-flagged.

Jimmy Phelps of Baldwinsville, N.Y., ran in the top five for the entire distance and finished third. Justin Haers of Phelps, N.Y., registered a career-best finish of fourth and Pat Ward of Genoa, N.Y., was fifth.

Danny Johnson of Rochester, N.Y., and Tim McCreadie of Watertown, N.Y., who finished sixth and seventh, respectively, were the first drivers in the final rundown who made at least one pit stop. Both pitted on lap 26 and were in position to go farther with their fuel window.

While the rain made a moot point of the 200’s new procedures that mandated teams must change one right-rear tire after lap 100 and the final 25 laps of the race would be run under green-flag conditions, Hearn didn’t question the validity of his $50,000-plus triumph.

“Yeah, we were lucky that it rained, but did we have the dominant car? Absolutely,” said Hearn, who drove an Enders-powered Teo-Pro machine fielded by Madsen Motorsports. “Did we deserve to win the race? Yes. We didn’t win it because everybody else pitted and we stayed out.”

Indeed, Hearn didn’t receive a single serious challenge during his long stint in the lead. He easily handled five restarts and lapped cars at will during extended periods of green-flag racing.

“What a race car,” Hearn gushed when he was interviewed on the winner’s stage. “Any time I wanted to go, I could just go.

“I had way more than I ever showed. I was totally letting off (on the straightaways) because we knew the more fuel I could conserve, the bigger my fuel window would be after lap 100 if the yellow didn’t come out or it didn’t rain.

“We had two plans,” he added. “One was to pit early on and then cycle through and pit again after lap 100. Then we started to monitor the radar and they said it’s gonna get here before lap 100, so at that point there was no option. You just stay out because you don’t come in and give up your track position, give up your win.”

At 54, Hearn became the oldest driver to win the VP Small Engine Fuels 200, surpassing Frank Cozze of Wind Gap, Pa., who was 53 when he won in 2008. But when Hearn celebrated his victory inside the John Hill Infield Media Center because the rain moved the ceremonies indoors, he felt like the 30-something star he was for four of his previous five wins at the ‘Cuse.

“We’ve won it a lot of different ways,” said Hearn, who inexplicably had only one top-five finish in the VP Small Engine Fuels 200 (a third in ’97) since his last win in ‘95. “We’ve won it with dominant cars, but I’ve never won it in the rain. We had a little help from above today but we’ll take it.”

Sheppard, 30, was satisfied with his $25,000 bridesmaid finish after running much of the distance in the fifth or sixth spots with his Jeff Brownell Sr.-owned Bicknell car. The 2009 event winner was a runner-up in the 200 for the second time.

“We’ll take it,” said Sheppard, who also placed second in 2008. “We’ve had some real tough luck the last couple years, but the last three times we’ve finished this race we’ve been in the top two. Sometimes Mother Nature is a part of racing and it worked out good for us today. We would’ve liked to have won it, but second is a pretty good day.”

Phelps, 37, was a subdued third-place finisher in the Al Heinke-owned Troyer machine. He badly desires a victory in the 200 and would have liked an opportunity for the race to play out.

“We had a good car all day,” said Phelps, whose career-best finish in 10 event starts is second in 2010. “If the sun came out and they dropped the green right now we’d be out of gas pretty quick anyway, so I’ve got mixed emotions. I don’t think we had anything for the 20, but we had a top-three car so we’re happy.”