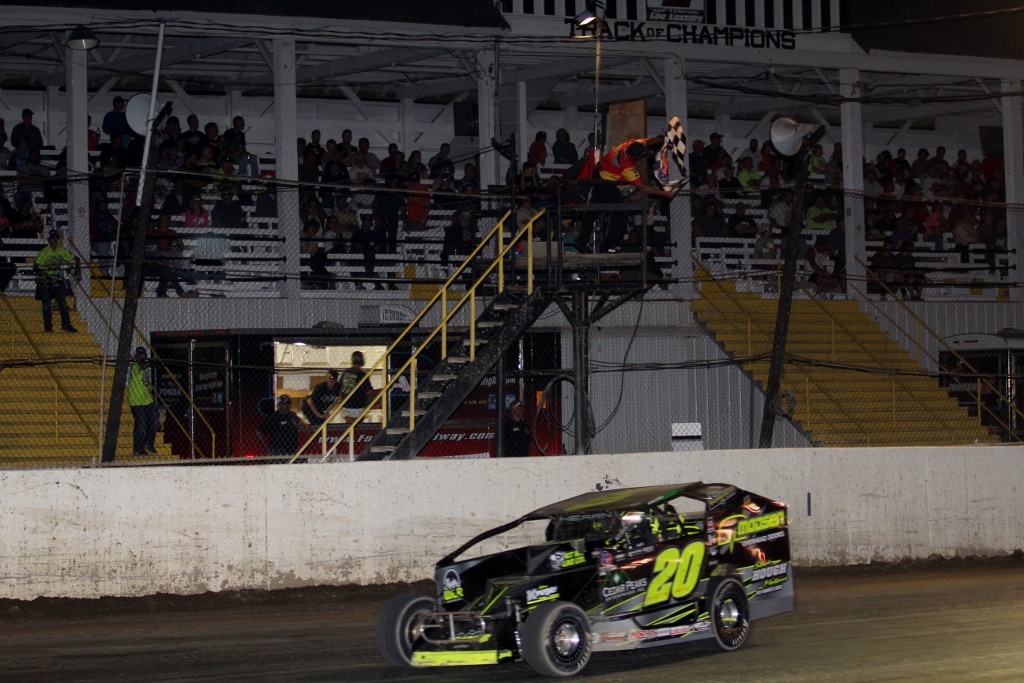 Former point leader Matt Sheppard, of Waterloo, N.Y., is typically one to hold on until the very last lap, but a broken axel took out the FX Caprara Car Co. No. 9H just seven laps into the main event. Sheppard’s absence left Hearn, then second in points, and Billy Decker, third, battling for the advantage.

Sheppard started the race on the pole after winning a heat race and redrawing well. Decker, out of Sidney, N.Y., started on the outside front row and sped ahead to claim the lead at the conclusion of the first lap. Hearn, who started fourth on the grid, was also fast at the green, charging to third place in the first lap and second place in the second.

In lap 4, Hearn tried out the topside, and found enough speed there to pass Decker for the lead.

“Anytime the bottom’s that slick like that, you’ve got to go up there and look at it anyways,” Hearn said. “Billy was up there too; I saw him coming down off the cushion and left that outside lane open for me.”

In one small move, Decker gave up the lead, and wasn’t able to take it back the rest of the race.

“I think we were the second-best car there tonight,” said Decker, who wound up second. “We fired pretty good at the start of the race, rolled around the outside, and I said to myself, ‘man, that outside is really far out there in 3 and 4, let me try the bottom.’ We only had one shot and Brett drove around the outside.”

Sheppard brought the first caution of the race in lap 7, when he exited the track due to a broken rear axel. The team was not able to repair the damage and packed it in for the night.

The subsequent double-file restart was no match for Brett “the Jet” Hearn, who seemed to fly ahead of the rest of the field, and soon put some distance between his Madsen Overhead Doors No. 20 and the Gypsum Wholesalers No. 91 of Decker. By lap 18, Hearn had reached slower traffic, and even that was no obstacle for the defending series champion.

The yellow flag waved a second time in lap 20, and Jimmy Phelps, Keith Flach and Jim Davis took the opportunity to make a trip to the pits. All three returned under yellow.

Hearn again kept his lead off the restart, and by lap 41 had managed to put 6 cars between himself and runner-up Decker. Caution conditions slowed the pace again in lap 42 with Gary Tomkins slowed to a stop in the backstretch. At the halfway point, Hearn still had an ample lead over Decker with Pat Ward running third, Stewart Friesen fourth and Larry Wight fifth.

Caution would take over the track three more times, once in lap 59, again in lap 91 and a last time in lap 94. Each time, Hearn pulled ahead of the field and Decker kept second. A hard charging Danny Varin made his way up through the field, cracking the top-five by lap 60 and claiming third place from Ward by lap 85. However, he did not have enough momentum to challenge Decker and Hearn in the final laps. Bobby Varin finished fourth after starting 16 th and Ward finished fifth.

Although Sunday’s win was a pivotal victory for Hearn, the champion driver said he would have been pleased with any strong finish.

“I just kept thinking the whole race, ‘We gotta finish it, we gotta finish. We have to stay good for 100 laps,'” said Hearn, who finished second to Wight Saturday night at Fonda Speedway. “I’m just happy to finish this one off, and not have what happened to us last night. It’s a good win for us, it’s a great point night for us.”

While the win might have boosted him to the point lead, Decker was happy with a podium finish as the Super DIRTcar Series speeds to some of the biggest races of the season.

“I said yesterday that if we finished in the top three today, I’d take it,” Decker said. “I like coming to Fonda, I like the fans here, but it’s just been a thorn in our side for a long time. Ever since I wrecked that car in ’98 here, it’s been trouble for us.”