Hearn started the race from the tenth spot on the starting grid with H.J. Bunting III taking the lead off the initial green. Stewart Friesen passed Bunting in lap two and, by lap 15, Friesen was darting between lapped cars with Hearn at his back bumper.

In lap 20, Hearn cruised past Friesen on the backstretch, continuing to tenaciously maneuver lapped cars for 15 more green laps. “The Jet” was so persistent, in fact, that when he reached Pete Britten and Eric Kormann racing two-wide, he never slowed to let one pull to the side – he sped between the two, nearly touching the sides of both as he passed. That daring maneuver cost him a tire.

“I thought I’d get through the hole and I didn’t quite fit, but maybe bent the wheel or scuffed the side wall,” Hearn said. “I probably should have been a little more patient at that point.”

The timing worked out for Hearn, with the tire giving at the turn-four pit entrance, allowing him to steer to the pit crew without further damaging the car. The crew worked quickly on the lap-35 caution, sending Hearn back to the track before the green. Having lapped more than half the field when he was in the lead, Hearn was able to restart tenth as the last lead-lap car.

“Right off the get-go, I had a fresh tire and passed five or six cars on the first lap,” Hearn said of the lap-35 restart. “Before I knew it, I was a contender again.”

For Clair, who gained the lead when Hearn pitted for a tire change, Hearn’s last-lap challenge was not a surprise.

“I had a really fast car tonight, but when I saw Brett Hearn on the scoreboard in third I knew that his was the fastest car here,” Clair said through a translator. “I’m really happy with our performance here the last four days.” 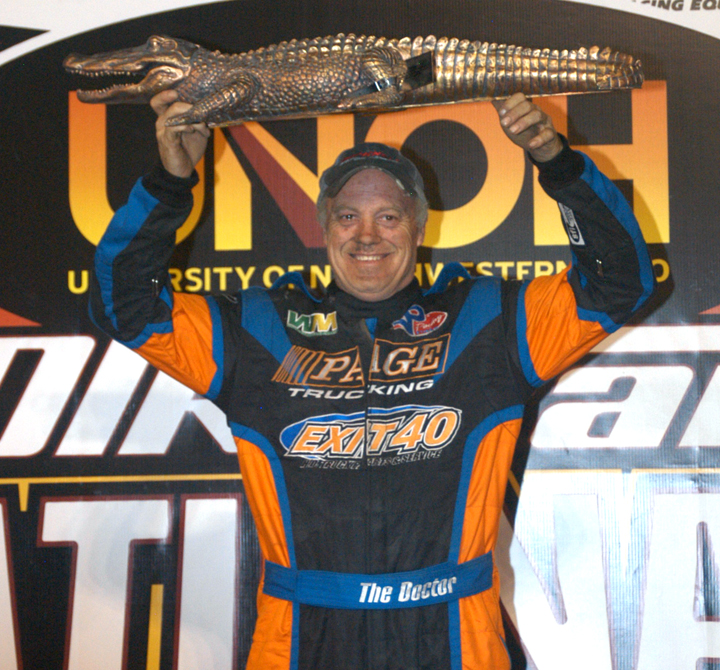 “We’re really excited to get that big gator. The championship means a lot to the race team and myself, so it’s just a really cool situation for us all,” Johnson said, although he would have liked to have made it to victory lane, and was in contention for the lead for much of the race. “As long as we could get a good finish and get the championship, that was really important to us.”

Justin Haers, of Phelps, N.Y., finished third after running in second for most of the lead and very nearly passing Clair on the first of two lap-45 restarts. Friesen started fourth, made his way to the lead early, but ended up back at fourth by the time the checked flags waved. After an uncharacteristically poor qualifying round, three-time defending series champion Matt Sheppard started 16th on the grid, but made his way up to fifth.

Mat Williamson started sixth and finished seventh. Friday’s winner Rick Laubach, qualified well and was a strong contender for the lead early in the race, but finished eighth. Rich Scagliotta finished ninth and Bunting tenth to round out the top ten.

After a brief hiatus, the Super DIRTcar Series moves back to the Northeast, with the next date scheduled for Wednesday, June 5, at Rolling Wheels Raceway Park in Elbridge, N.Y. The 60-lapper at Rolling Wheels is the first chance competitors will have to earn points toward the series championship.