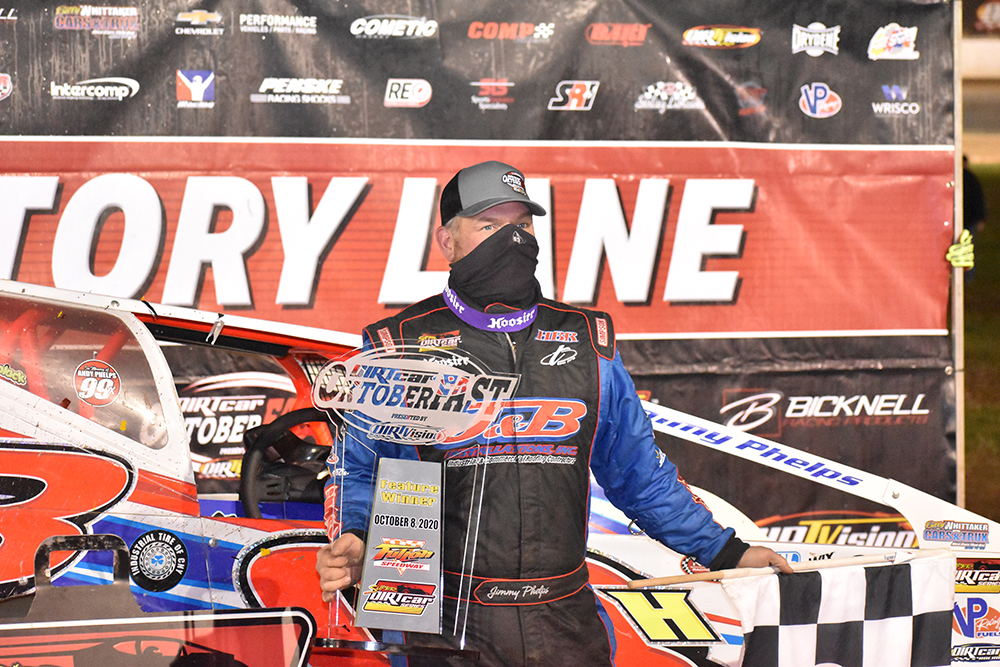 Mike Mahaney, from King Ferry, NY, was the best of the rest. Mahaney made some aggressive moves early to put himself in a position to go after the lead. The No. 35 Adirondack Auto Big Block Modified was a serious threat to the leader but he could not keep up with Phelps in traffic.

After a difficult OktoberFAST opener for Niagara-on-the-Lake, Ontario’s Stewart Friesen had a much-improved race night and made the podium. The No. 44 climbed up through the field in a hurry and got right up to Mahaney’s back bumper. Friesen and his stout Halmar team maintained and finished third.

It was a night of incredible numbers. 235 cars in three divisions raced a total of 32 races. There were 380 laps of side-by-side racing on a beautiful Fulton Speedway surface.

Jimmy Phelps had some numbers of his own. Since he played double duty Phelps had to draw for a Qualifying Group twice. He drew the number 63. Twice.

After that, it was a matter of getting into the redraw for both races. Phelps accomplished that by going out and winning them. “The Bandit” still had a little luck left on his side. He drew the pole for the Bicknell Racing DIRTcar 358 Modified Series Feature. Then he drew the pole again for the Billy Whittaker Cars Super DIRTcar Series Feature on the front stretch live on DIRTVision. 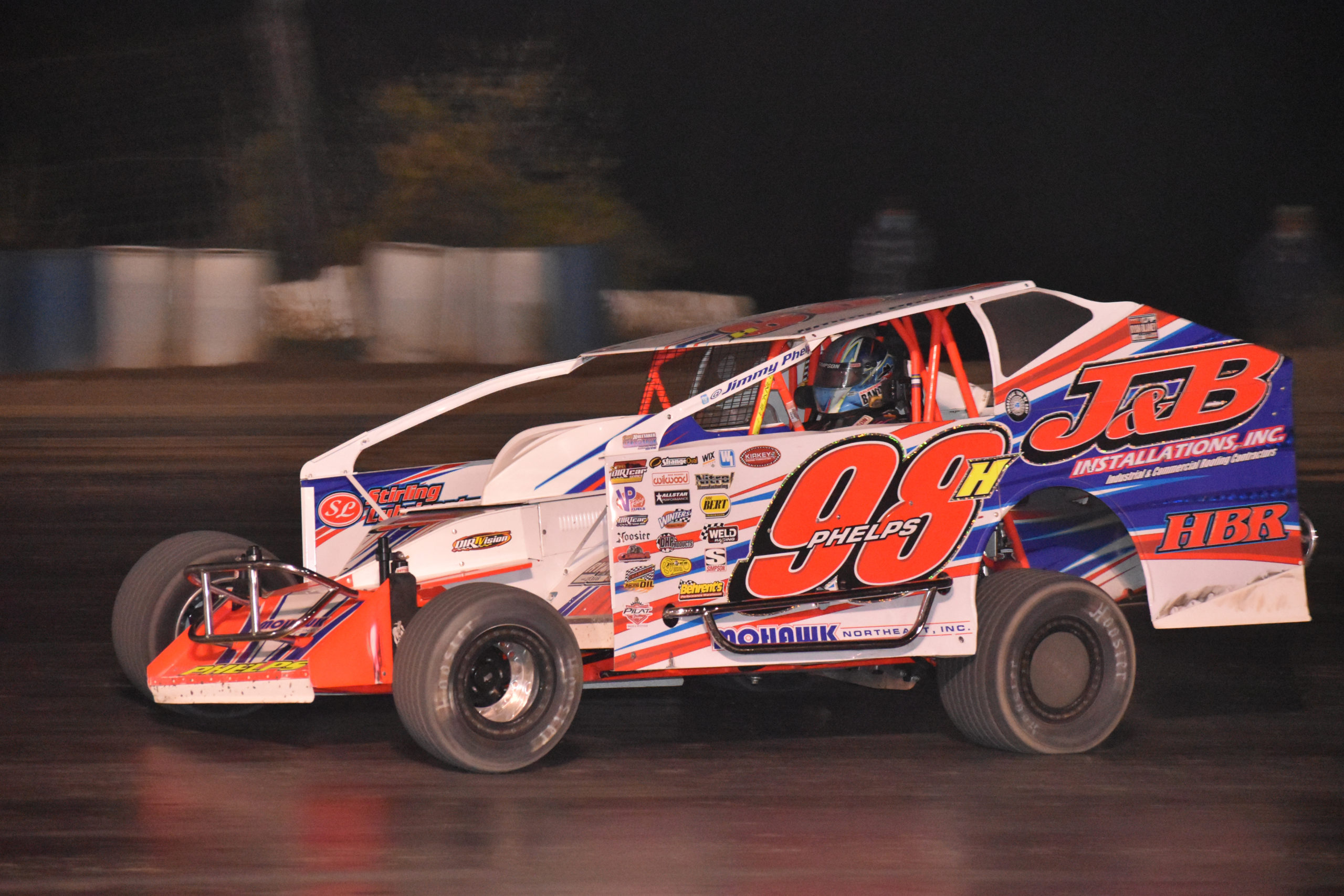 “It was a great night for us. With the limited amount of racing, we’re just happy we get to race here,” Phelps said. “It was a perfect night for us.”

“We found a new baseline and we got ourselves back on track everywhere we went. We came to a few practice nights and for whatever reason, it was excellent here,” noted Phelps. “We knew three weeks ago that we had to come back to Fulton with that package. This car is just really good.”

The final 52 laps of the 60-lap Feature were non-stop without a caution. Phelps caught up with a very strong pack of Big Blocks racing side by side in front of him. That’s when he made the move of the race.

“When you get held up in lapped traffic you know somebody is coming up. When I made it four-wide I had a run. I was down in the grip. I had to get down in front of those guys and just hope they let me in,” said Phelps. “Fortunately, it worked out. We put it all together.” 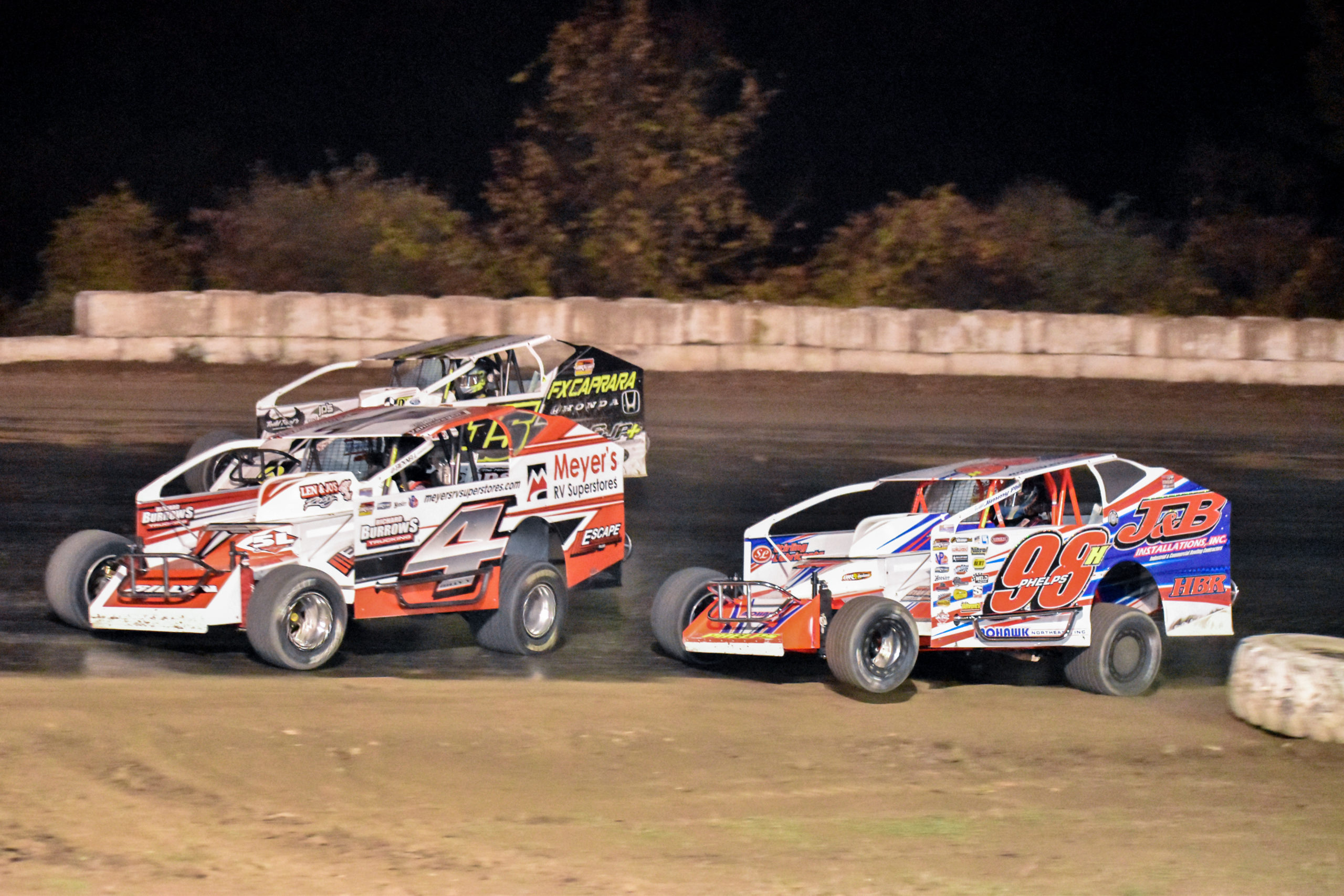 “Jimmy made some crazy moves through lapped traffic. I split through two cars and I thought that was pretty cool but Jimmy dropped low and made it four-wide out of turn four and I wasn’t going to clear them. He got a big split,” Mahaney said laughing. 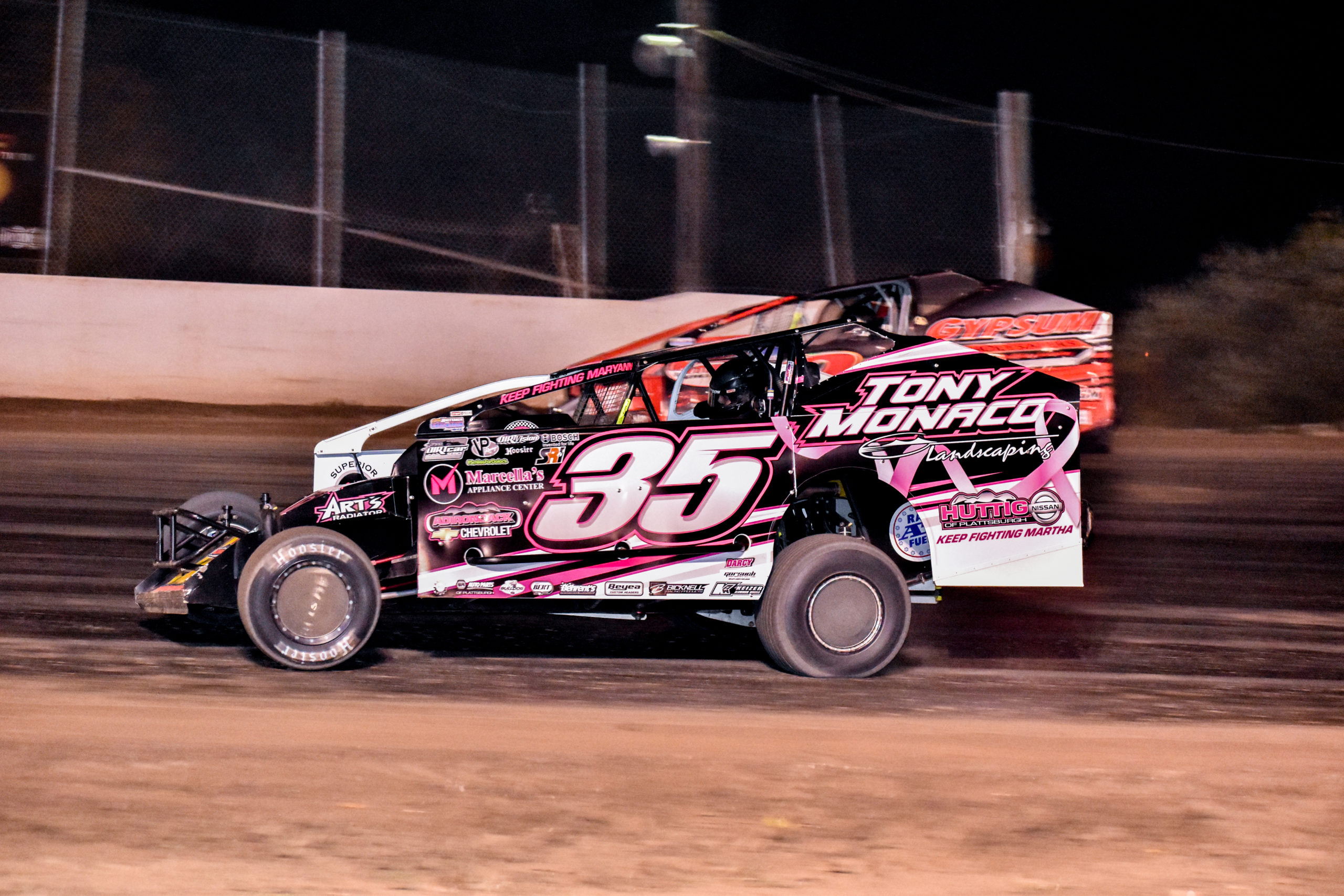 With a third-place finish on Tuesday at Albany-Saratoga Speedway and a second at Fulton, Mahaney is racing with confidence.

“The car is really rolling right now. The hard work is paying off. I am really happy with it. Tonight we really wanted to win but I never got a chance at it. I really would have liked a caution and had a chance to race him without cars in front of us. We didn’t get that and he did a better job of getting through the traffic. He earned it.”

Mahaney made several strong charges for the lead. He was at Phelps door and bumper several times before traffic separated them.

“When I got to lapped traffic I really lost my rhythm. It got super tight. It was weird. There nothing wrong with the race car. It didn’t fall off. I messed up. Later it got better and I knew Stewie was coming,” noted Mahaney. 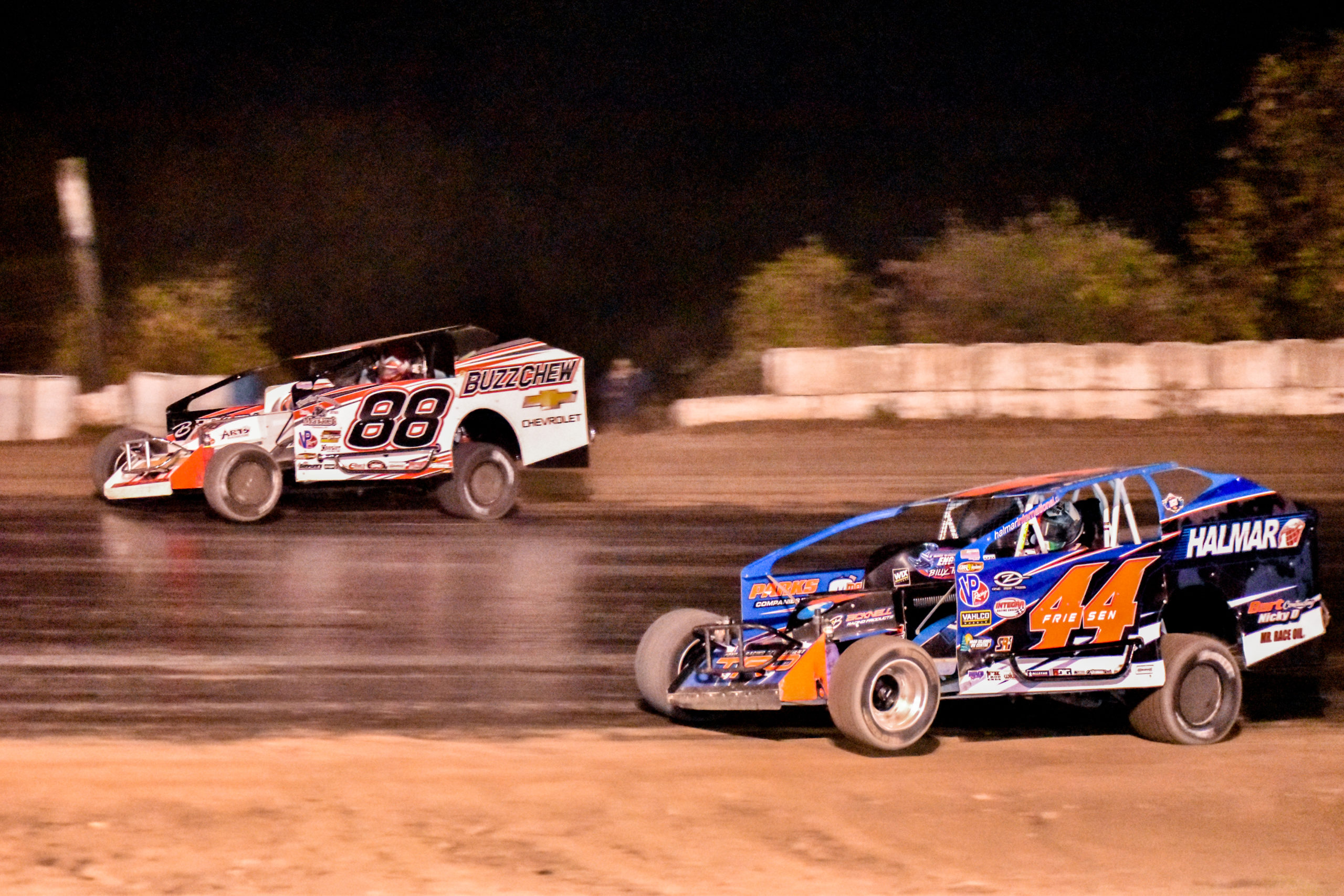 Stewart Friesen was filling Mahaney’s mirror for the second half of the race. Friesen felt he was battling tire heat after catching up to the No. 35.

“We were just playing the tires. Mahaney fired off and put the pressure on Phelps. I overheated the right rear tire a little bit. I kept putting around the yuke tires trying to save my stuff,” said Friesen. “I would get the left rear in the bite off of turn four but then I was slipping the right rear and ended up sealing it up a little bit. That was it.”

Eight-time Super DIRTcar Series champion Brett Hearn turned the fastest lap in Time Trials awarding him $500 from Penske Racing Shocks. Plus, “The Bandit” stole another $250 for being second quick, his night’s only blemish.

Join us live on DIRTVision Friday, October 9 at “The Nasty Track” Can-Am Speedway for night four of DIRTcar OktoberFAST.