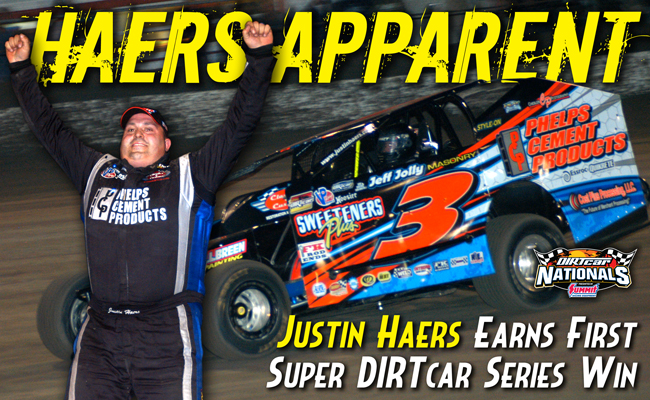 “I’m so excited. This has been a long time coming,” said the Super DIRTcar Series regular of ten years. “We’ve been close so many times, even down here last year. It’s just awesome to get a win down here. We came down here just to be competitive, and to get a win is just awesome.”

Haers started his night out right, timing second-fastest overall and picking up the win in his heat, claiming the top starting spot for the 30 lap feature. The Phelps Cement Products No. 3 took the lead at the green flag over Big-Block Modified rookie Anthony Perrego.

A lap-2 caution slowed the pace early in the race with Mario Clair off-pace. Clair pulled into the pits and Haers reclaimed the lead when the field returned to green. He quickly started to pull away from the pack, leaving Dale Planck, Pete Britten and defending series champion Brett Hearn in a three-wide battle for third.

Britten charged ahead from the battle in lap 4 and pulled up beside Perrego in second. He made the pass in lap 6, and by the lap 7 “Batman” Britten was closing in on Haers in the lead. Behind them, Billy Pauch darted between teammates Matt Sheppard and Jimmy Phelps for sixth.

In lap 9, Britten swung around Haers in turn two and cruised ahead of pack. Haers learned his lesson, and, with Britten high on the outside, Haers slid past him in lap 12.

“Peter passed me for the lead. He passed me on the top and I said, man, I’ve got to get up there and get up on the wheel,” said Haers, who garnered two podium finishes out of four races last year during DIRTcar Nationals presented by Summit Racing Equipment. “When I got up there, there was just so much more traction on the top. I was able to reel him back in, and I was able to roll him on the bottom of one and two and clear him on the back stretch.”

With the rest of the race caution free, Haers was left battling lapped traffic as he pulled further away from his runners up. Perrego, who sat behind the wheel of a Big-Block Modified for the first time Tuesday during practice, fell to third mid-race, but kept his cool and deftly maneuvered lapped traffic. He closed in on Britten in lap 19 and slid to the outside to pass him in lap 20. Perrego fumbled with 5 laps to go, but recovered quickly enough not to lose his position.

“I almost spun around there. I was a little nervous,” Perrego said about the incident. “We got into (turn) one there, I was just trying to keep up with the lapped cars, and I got into one a little hard.”

“It was just an awesome race. I’m so excited. It’s just a great way to start the season,” said Haers of Wednesday’s race, the 2014 debut for the Super DIRTcar Series. “Tonight we were really good and, I told my guys, ‘we’re going to get a gator this year, we came so close last year.”

Perrego came in second, and was pleased with his first Big-Block Modified feature race finish.

“This is amazing, to come out here and finish second out of the gate,” said Perrego, who successfully battled veteran racer Hearn in his heat race.

Pauch, another seasoned driver, made the right moves to finish third. In lap 27, he swerved to the outside around Planck for the position and held on for the final three laps.

“We moved up pretty good, and for my team, coming all the way down and running with these guys, that’s a pretty good finish,” said Pauch, who hails from Frenchtown, N.Y. “My guys worked at it hard and I think we have some notes to go from tomorrow.”

Matt Sheppard, of Waterloo, N.Y., took his new Heinke-Baldwin Racing / FX Caprara Car Companies ride from its starting spot in tenth to fourth by the end of the feature race’s 30 laps. Planck, of Homer N.Y., finished fifth. Rounding out the top ten are Stewart Friesen in sixth, Peter Britten in seventh, Brett Hearn in eighth, Jimmy Phelps in ninth, and Jamie Mills in tenth.

DIRTcar Nationals presented by Summit Racing Equipment continues Thursday through Saturday, Feb. 20 through Feb. 22, featuring the Super DIRTcar Big-Block Modified Series and the World of Outlaws Late Models Series for all three of the remaining days. General admission tickets will be available for purchase at the gate and include a FREE Fan Pit Pass!

Fans can also catch the action live in the comfort of their homes on DIRTvision.com. Daily passes and package discounts for all three nights are available.