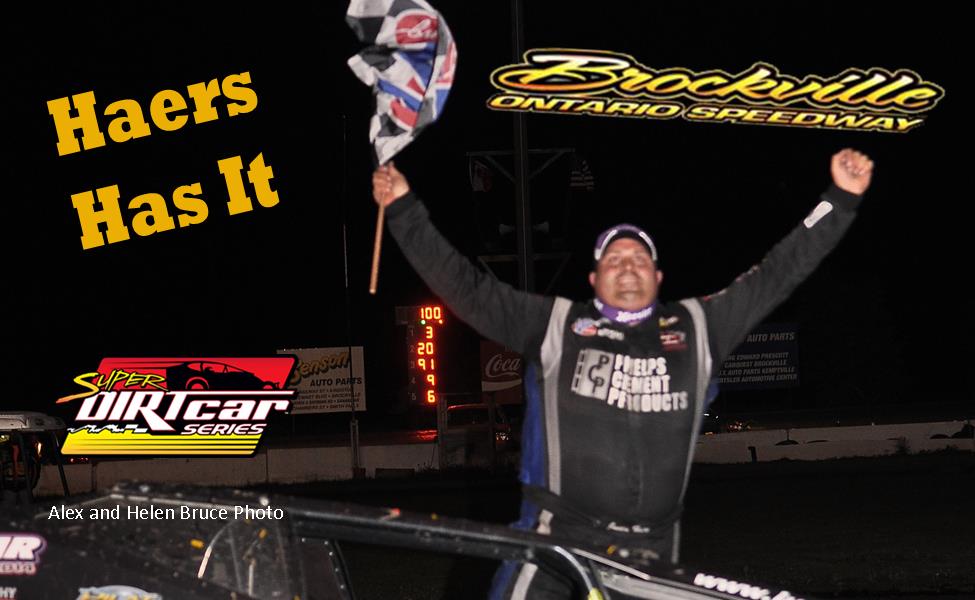 BROCKVILLE, ONTARIO – May 28, 2014 – Justin Haers started his racing season better than ever.

“It feels awesome,” said Haers, whose first series win was a no-points race February during DIRTcar Nationals presented by Summit Racing Equipment. “I got a taste of it down in Florida, winning a big race down there. To start the year off with our first Super DIRTcar Series race and to get another win, it’s just icing on the cake.”

Nearly ten years after accepting the Big-Block Modified rookie of the year award, Haers arrived at the first Super DIRTcar Series Ontario opener without a series point win to his name. Successful seasons in 2012 and 2013 brought him to fourth and eighth places respectively in end-of-season series point standings, but no victories were tallied.

Setting his sights on Decker in first, Haers powered forward, but an early race caution in lap 3 slowed the pace. Decker, of Sidney, N.Y., chose to restart on the outside lane and surpassed Haers when the green flag waved again in lap 7.

After a second series of yellow-flag laps, Haers found the speed he needed on the challenging inside lane to pass leader Decker in lap 23.

“We just didn’t tighten up enough,” said Decker, whose Brockville Super DIRTcar Series experience had included five top-five finishes out of six total races. “I knew from Brockville experience that sooner or later that bottom will come around on the restarts, and it did.”

A determined Haers put some distance between the Phelps Cement Products No. 3 and the rest of the pack and stood his ground, even after eight-time Super DIRTcar Series Champion Hearn, of Sussex, N.J., made a last-lap challenge.

Hearn started the race in seventh, but picked off his competition to make his way to second place in lap 80. He fiercely fought three-time Super DIRTcar Series Champion Matt Sheppard, trading third and fourth positions with the Waterloo, N.Y., racer three times before pulling ahead. He usurped second from Decker with a quick pass on the inside groove off a lap-79 restart and spent the last 20 laps of the feature race battling Haers for the lead.

“Sometimes you’re out there leading and you get into lapped traffic and you don’t know which line to run in,” Haers recalled of these final laps. I” started moving around and I saw someone peek their nose under me. I thought it was probably going to be Brett (Hearn). I just tried to protect my line and keep things smooth.”

Hearn and Haers raced wheel-to-wheel for many of the last laps, but Haers stayed strong to finish in the lead and claim his first Super DIRTcar Series points win.

“Justin’s got the experience; he’s not easily shaken,” said Hearn, who finished second. “I got a move off the line that he preferred. I thought I was going to be able to set him up, but I just didn’t get enough to run.”