Fuller Fires ahead to Win

“It’s always good to win here,” said Fuller, who came all the way from Edwards, N. Y., to compete in both Super DIRTcar Series and World of Outlaws Late Models Series events. “You’ve got a good group of cars and a standing-room only crowd.” (Photos by Mike Petrucci)

Fuller and his Super DIRTcar Series cohort certainly gave the crowds in the grandstands a spectacular show. Following the first-ever 4-wide solute featuring, simultaneously, all three premier series – the Super DIRTcar Series, the World of Outlaws Late Model Series, and the World of Outlaws Sprint Car Series – the Big-Block Modifieds stayed on the track and revved their 800-plus horsepower engines for the first feature of PEAK World Finals presented by NAPA.

At the initial green, Godown took the lead, but a pile-up in the back straightaway brought out an early yellow in the first lap. Rob Bellinger and Michelle Chicoine were able to drive away, but Tim Kerr and Vince Vitale were towed to the pits.

Racing continued, the double-file restart giving Britten the chance to take the lead from Godown. It didn’t last long, however, as “T-Mac” Tim McCreadie motored around the inside of lap 2 to pass both Godown and Britten. He sped forward, looking to distance his 4* from its followers.

Meanwhile, Hearn and Fuller were making their way up the ranks, Fuller reaching second and Hearn fourth by lap 9. When McCreadie lapped Tim Currier in lap 12, Hearn and Fuller looked forward to see both traffic and opportunity. The top three maneuvered through lapped traffic, Hearn finally beating out Godown for second, and both Hearn and Fuller closing in on the lead. By lap 25, the three leaders were nose-to-nose at every turn, but none had let down his guard.

In lap 28, Fuller finally sped past McCreadie and built a fair lead within a lap, keeping it through 12 green-flag laps to the end.

“When you know you’ve got the car that’s faster than the leader, you’re just looking for that time to pounce,” Fuller said. “You want to get into lapped traffic and wait for it to hit. I found my time – it 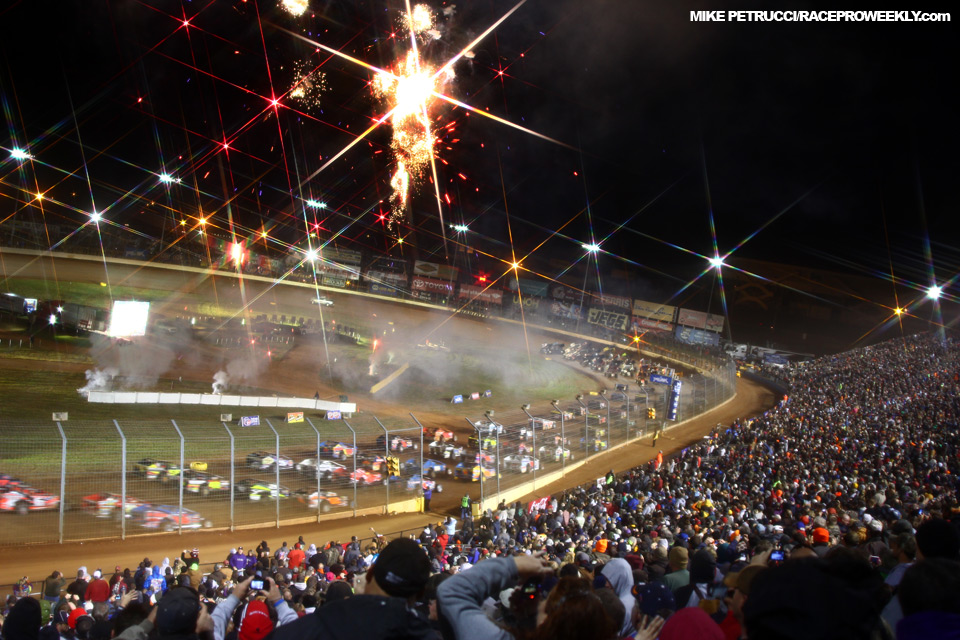 was in lapped traffic – and I could roll through the middle and he couldn’t.”

McCreadie faced tough challenges from Hearn the remaining laps of the race, but stayed strong and finished second. Hearn crossed the finish line just after in third with Godown steady in fourth.

“It’s good to know that we have a car that runs that good here,” said McCreadie, of Watertown, N. Y., who saw the victories at the previous three consecutive Super DIRTcar Series races at The Dirt Track at Charlotte. “I don’t think anybody would mind having the record we’ve had down here with our Modified. We’ve just got to be a little sharper and make sure we do the same.”

Fuller and McCreadie agree that tire choice made a difference in Friday’s race, with Fuller’s team making an offbeat selection.

“He took a shot in the dark. Everybody was running a different tire from him,” said McCreadie, for whom consistent green-flag conditions also had an impact. “He needed more green laps and I needed a yellow. That’s just the way it goes. We didn’t get any yellows that we needed. He did a good job, and we just couldn’t hold him off.”

“My tire choice really worked,” Fuller said. “It didn’t have to, but the track turned out that way.”

Rounding out the top 10 were Gary Tomkins in fifth, Britten in sixth, Justin Haers in seventh, Kenny Tremont, Jr., in eighth, Jimmy Phelps in ninth, and Danny Johnson in tenth.

With point leader Matt Sheppard finishing twelfth, the series championship is on the line for Saturday’s series finale. Hearn’s third place finish Friday has already bumped him up a spot, replacing Phelps for second, and only a 60-point margin remains to take the lead.

Super DIRTcar Series, Round 16 – The Dirt Track at Charlotte