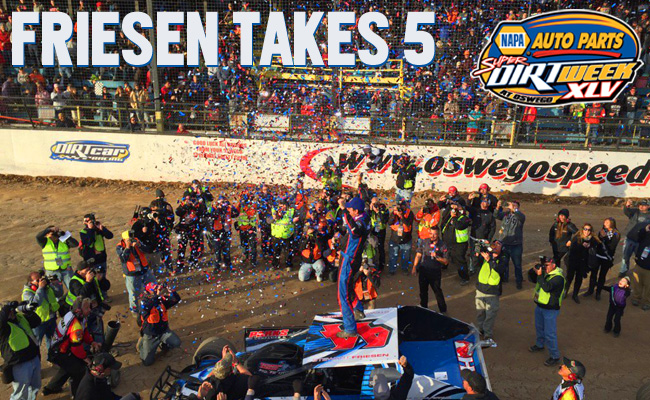 Makes a late race pass to pick up his fifth win

OSWEGO, N.Y. – Oct. 9 2016 – Stewart Friesen is no stranger at doing the NAPA Auto Parts Super DIRT Week roof dance, which he did as he picked up his fifth NAPA Super DIRT Week victory Sunday night at Oswego Speedway. Friesen closed the books at Syracuse with a win last year and made history this year with the first ever dirt win at Oswego Speedway in the Halmar International No. 44 Big Block Modified.

“I’ll tell you what, my guys worked so hard. The Halmar racing team did a great job. I have great teammates,” Friesen said in victory lane. “I want to thank everyone for supporting this event. The track conditions were challenging, but that was an exciting race. Just standing up here on this thing with all of the great guys that won the Classic and the modified races is pretty damn cool. It’s a dream come true. It’s so surreal. I have to thank all of my people who got me to this point.”

“That’s Billy The Kid smoke down that backstretch, and it’s awesome,” Friesen continued. “We had a great race car. I knew if I hit my marks right I could squeak away.”

Sheppard and McCreadie battled vigorously for the lead for several laps until Sheppard was able to jump out front, but it wasn’t long until Sheppard hit lap traffic in lap six.

Danny Varin, who started fourth, got by Justin Haers for third on lap 12 and was soon closing in on Hearn until Hearn fell off the pace bringing out a yellow on lap 14 with a right front flat.

Larry Wight, starting tenth in the feature, broke into the top five in just 12 laps and advanced into third by lap 21.

Sheppard and Varin were about to bring the field to the lap 49 restart as Varin slowed, forfeiting his second place spot due to a left rear flat and giving Friesen the runner-up spot.

Sheppard brought the field back to the green on lap 53 until Eldon Payne got tangled with other cars on the backstretch. The impact sent his No. 28 machine to its side on the backstretch. It ultimately regrouped the field, giving Friesen the opportunity to make his move to the top.

As the scoreboard clicked off lap 65 Sheppard led the way over Friesen, Keith Flach, Eldon Paine and Billy Dunn.

After an earlier pit stop, McCreadie made his way back into the top five on lap 81. McCreadie then passed Paine on the outside of turns three and four to advance to fourth.

Ronnie Johnson, who started nineteenth, was slowly making his way forward as he crept into the top five by lap 90.

Lap 93 saw a pileup on the backstretch as Whittaker, Bussiere and Alan Johnson got tangled up.

After a lap 14 pit stop Brett Hearn maneuvered his way into the sixth spot.

McCreadie made the move on Friesen, and passed him in turns one and two for third on lap 100.

Sheppard led the field at the halfway mark over Flach, McCreadie, Friesen and Ronnie Johnson.

Another caution was brought out on lap 105 as Flach and Friesen, running two and three, took advantage of the caution and went pit-side to make adjustments.

Ronnie Johnson made his way into the second spot but soon fell off the pace bringing out the yellow on lap 124.

Top two runners Sheppard and McCreadie were taking advantage of the cushion and rode around the top side of the track as they pulled away from Kenny Tremont Jr. in third.

Friesen worked his way around the top side of the track and passed Wight, advancing himself into the top five on lap 146.

Sheppard once again caught lap traffic, but this time it cost him the lead. Coming off of two, Sheppard went high behind a lap car as McCreadie shot low and was able to drive under Sheppard and come out of turn four as the new leader on lap 154.

After losing the lead and a caution coming out on lap 157, Sheppard took advantage of the caution and made his first pit stop of the night two laps later. Sheppard kept making his way back into the hot pit with overheating problems but never went a lap down.

Friesen took advantage of the lap 175 restart, drove by Rudolph for the third spot, and then chased down Tremont. He advanced to second on lap 177.

A lap 177 restart saw Friesen dive low under McCreadie into turn one. But got extremely loose coming out of turn two but managed to save it without losing a spot.

Sheppard charged under Hearn on the bottom of turns three and four. He made his way into the top five on lap 181.

Terrance broke into the top three as Sheppard slowly closing in.

It did not take long for Friesen to close in on McCreadie as he caught the back of McCreadie’s bumper with just ten laps remaining.

Friesen made the move of the night as he drove hard to the bottom into turn one, slid across the front of McCreadie, and shot out of turn two as the new leader with seven laps to go.

McCreadie didn’t give up, though, as they then battled back-and-forth for the top spot. McCreadie went in high into turn one and sent his No. 39c machine spinning, which brought out the final caution of the night on lap 194.

Friesen drove into turn one and got up high into the marbles as Hearn bolted into second going three wide with Terrence coming out of two.

At the checkered it was all Friesen as he took home his fifth NAPA Super DIRT Week victory with a cool $50,000 payday.

“Rolling the top and not messing it up was a fine line. Timmy hit the wall a couple times there. I pounded it hard there on that last restart,” Friesen said. “I knew if I could roll up to him a little bit and slide up out of one and two, and just tried to stay out of that big bump down there. I saw Brett poke his nose in there a couple of times. I tried to hit my marks after that. They were hard to hit, but it was awesome. This is so cool! To see these grandstands packed and the backstretch grandstands packed, man, what an awesome feeling.”

Six-time NAPA Super DIRT Week Champion Brett Hearn made a hard charge on the final restart of the night with six laps remaining. Diving to the bottom of turns one and two making it three wide between Friesen and Terrence.

“We broke the header pipe with about twenty to go. I almost felt like we were down on power but I think it was helping me get off the corner a little better,” Hearn said. “On that restart I laid back a little bit and got a run on those guys on the front straightaway, and when I got those guys I almost cleared both of them in one sweep. I got to the point ‘wow what do I do now?’ Do I move up on him or do I try and keep it down low? Friesen had just enough to run on the outside of me. I’m just happy we came through and pulled a second out of the deal. It was a great day for Teo with a one, two, three finish. We’re on a roll.”

Terrance had his No. 66x machine hooked up all week as he locked himself into the fifth position for the Bud Light 200 and managed to get his best NAPA Super DIRT Week Big Block finish with a top three.

“It’s been a long week so far. It feels like we’ve been here forever, but it was a good day for us and a good day for the team. I’m real happy with our finish,” Terrence said. “The guys put this car together and kept it together. It’s been fast since we got here, so we’re real happy. It was a little nerve racking there at the end. I think I had the right front up on the wall there a little bit. We wanted to make a move there on the bottom, but we just didn’t have a good race car to run the bottom. Overall we’re happy with a third place finish.”

Jimmy Horton, who finished second in the non-qualifiers race, received the hard charger award after coming through the field from 38th and finishing ninth.

“We needed to run a little bit better, so we didn’t have to start in the back like we did. We’ll gain on it with what we have and give them a challenge next time,” Horton said. “Everybody did a good job. We tried to put on a good show for everyone.”

The Super DIRTcar Series will be back in action at Brockville Ontario Speedway in Brockville, Ont. on Saturday, Oct. 15th for the 1000 Islands RV DIRTcar Northeast Fall Nationals.

Race Notes: Forty-three Big Block Modifieds started the feature and ten finished on the lead lap. The main event was cut 100 laps short due to rain canceling the festivities on Saturday and forcing a tight schedule on Sunday. There were 17 cautions and two red flags brought out during the Bud Light 200.