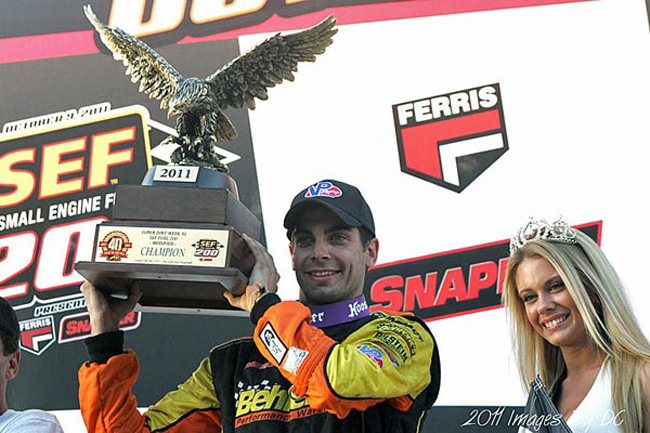 One year after earning acclaim as the first Canadian to capture DIRTcar Big-Block Modified racing’s most prestigious event, the 28-year-old star authored an even more convincing performance in the event’s milestone 40th annual edition to become just the sixth driver to win back-to-back SEF 200s.

Friesen inherited the lead on lap 101 when Bobby Varin of Sharon Springs, N.Y., pitted and was virtually flawless for the remainder of the distance. He relinquished the top spot on lap 154 – when he joined every other lead-lap driver in making a mandatory pit stop between laps 150-175 – but was first out of the pits and cycled right back to the front the following circuit.

Four-time SEF 200 champion Billy Decker of Unadilla, N.Y., who turned back a late-race challenge from Friesen to win Saturday’s DIRTcar 358-Modified Nationwide Insurance 150, returned to the track second behind Friesen on lap 154 and stayed there to the finish. The 45-year-old veteran made several bids for the lead but wasn’t able to unseat Friesen, who held an edge of 1.087 seconds over Decker at the checkered flag.

Friesen’s exhilaration was tempered a bit, however, when his Teo-Pro car failed a portion of the post-race inspection process. DIRTcar officials found a technical violation in the machine’s fueling system and levied a fine of $25,000 – half of the race’s posted $50,000 first-place prize – on Friesen’s team. Officials said the fine money will be added to the 2011 Super DIRTcar Series points fund.

Driving the same Jeff Daley-owned car he steered to victory in a record-breaking fuel-mileage run last year, Friesen started fifth and only briefly ran outside the top five after making his first pit stop on lap 42. He slipped by Decker while racing through the pack and was up to second behind Varin by lap 72.

Friesen’s biggest threat ultimately was Decker, who worked his way to second just before the lap 150-175 mandatory pit-stop window arrived. Decker pulled his Gypsum Wholesalers Bicknell car up to Friesen’s rear bumper by lap 180 and a couple circuits made a dive to Friesen’s inside entering turn three, but Friesen shut the door and Decker had his momentum dulled for good after the race’s 14th and final caution flag flew on lap 185.

“We had a great race with Billy all day long,” said Friesen. “Billy definitely had a great race car, so the pit stop (on lap 154) was critical. We were able to get out in front of him, and then I got a line in turn three that let me stay ahead of him.

“I’ll tell ‘ya, it is pretty cool to beat Billy Decker to win here. He’s so good at this place, you have to bring your A-plus game.”

“We had a great week,” said Decker, who was also aiming to match Hearn’s record of five SEF triumphs. “But one of the things that goes along with a great week is super-high expectations. If we had a hunk of junk all week we wouldn’t have expected to finish very well today, but we thought we had the car to beat. Unfortunately, today was the worst it was all week.

“Having said that, my guys still did a helluva job. I can’t thank everyone enough. We were close, digging and clawing all day, and we actually had a shot before that last caution. I got alongside of (Friesen) once, but we couldn’t make it happen.

“Stew had a real good. Early on, when he passed me (after their first pit stops), I said, ‘He’s way too versatile. He’s rolling.’ Maybe I should feel lucky that I even got to his bumper once.”

Decker’s $25,000 bridesmaid outing was good enough to vault him into the Super DIRTcar Series points lead by 48 points over Matt Sheppard of Waterloo, N.Y., who led laps 42-71 but was an early retiree. He finished 29th after sliding to a stop in turn two on lap 145 and then losing a left-rear wheel when he attempted to drive to the pits.

Jimmy Phelps of Baldwinsville, N.Y., finished sixth in the SEF 200 after recovering from an unscheduled pit stop on lap 121 to change a flat left-front tire. David Hebert of St-Damase, Que., placed seventh; Kenny Tremont of West Sand Lake, N.Y., was eighth despite being dealt a stop-and-go penalty for speeding on pit road when he made his mandatory pit stop on lap 154 (he had left the pits behind only Friesen, Decker and Coffey); Mark Flach Jr. of Selkirk, N.Y., finished ninth and earned the $1,000 Rookie of the Race honor; and Vince Vitale of Phoenix, N.Y., rounded out the top 10.

Contenders who experienced late-race trouble included Ryan Godown of Ringoes, N.J., and Tim McCreadie of Watertown, N.Y. Godown was running a solid third when he ran out of fuel on the final lap and plummeted to a 16th-place finish, while McCreadie had his repaired Sweeteners Plus car (it was heavily damaged in a Friday heat-race crash) perched in fifth place when its fuel tank ran dry during a caution period on lap 187 due to a prolonged gas leak.

Hearn’s tough Syracuse fortune since his last SEF 200 win in 1995 continued. He was able to make up a lap he lost after slowing with a left-front flat tire on lap 40 and climb as high as eighth before engine trouble forced him out on lap 104.

The race’s most serious accident, on lap 107, involved outside-polesitter Billy Dunn of Watertown, N.Y., and teenager Larry Wight of Phoenix, N.Y. Dunn’s car came to rest at the end of the homestretch with heavy front-end damage while Wight’s machine spun backwards in turn four and had to be cradled off the track. Neither driver was injured.

DIRTcar’s OktoberFAST Driving Traffic Back to the NY State Fairgrounds