Friesen Takes Opening Round at Charlotte 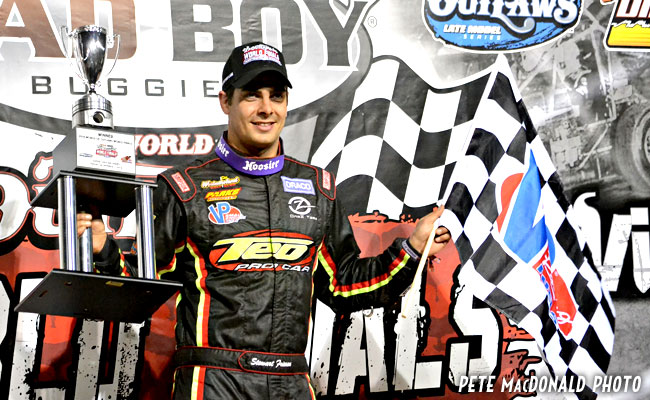 CONCORD, N.C. – Nov. 7, 2014 – For the second consecutive year, Stewart Friesen thrilled the packed grandstands at The Dirt Track at Charlotte with an impressive drive in the Bad Boy Buggies World Finals. The Canadian native now living in Sprakers, N.Y., started ninth and worked the high-side in methodical fashion for his third Super DIRTcar Series win of the season on the heels of his third Syracuse 200 win as part of NAPA Auto Parts Super DIRT Week.

“It is such a huge event to be a part of and to go out there and qualify good for the feature is one thing, but to win the damn thing is an unbelievable feeling,” Friesen said. “There are race fans from all over the county here, numerous other countries too. It is pretty cool. I’m just fortunate that Northeast Modifieds are part of the show and I can come down here and put on a show for the fans.”

Friesen started the event from the inside of the fifth row while Brett Hearn and Jimmy Phelps brought the field to the green flag at the start of the 40-lap affair. Hearn gained the edge on the first lap before Matt Sheppard powered by on lap two on the bottom of turns three and four after he started third.

Sheppard and Hearn battled at the front of the field with Phelps in the mix as well throughout the early stages of the event. Sheppard remained on the bottom while Hearn began searching around for a better line on the speedway. Hearn eventually found the middle working to the outside of Sheppard. The pair remained close together and were alongside one another when the only caution of the race came on lap nine as Gary Tomkins and Tyler Siri tangled in turn four.

Action resumed with the Sheppard and Hearn going back at one another for the race lead while Friesen began his march forward. Friesen, driving his Tom Cullen owned Teo, made his own lane on the speedway just inches from the outside retaining wall around the top speedway. This proved to be the perfect line as everyone else fought for the low lane on the speedway.

By lap 15 Friesen had navigated his way into the third and began tracking down the leaders as they raced side-by-side for the top spot. Hearn and Sheppard both fought for the moisture on the bottom of the track allowing Friesen to rapidly close in on them on the top. Friesen made his move at the halfway point powering by both Sheppard and Hearn for the lead on lap 20.

“That outside line kind of opened up for us, the seas parted and we got rolling up there,” Friesen said. “It is an awesome feeling being up there when you can do your own thing. You try not to get too nervous when you get close to front. I was reeling in Matt (Sheppard) and Brett (Hearn) there and they were dicing it out on the bottom. I kept hoping that one of them wouldn’t blast it up there and take my line. It worked out.”

After taking the lead, Friesen extended the gap on the pair as they continued their race for the runner-up position. Sheppard tried the top and that opened the door for Hearn to move into the runner-up position on lap 26. Sheppard quickly found out that his car wouldn’t work around the outside forcing him to quickly get back to the bottom of the racing surface.

Even in traffic Friesen continued to be effective on the top expanding the advantage on Hearn. As the race reached the three-quarter mark Friesen’s lead over Hearn was nearly three seconds. It was a lead that proved to be too much for Hearn to overcome as Friesen went on to score the victory.

“I thought we had the 9H (Sheppard) sized up until a black car came around the top and I thought there he goes,” said Hearn, of Friesen. “He always seems to find that lane up top that no one else can run. We were struggling on the bottom a bit there with Matt. We were sizing him up and trying to get by him clean and next thing you know we are fighting for second again.”

Hearn, of Sussex, N.J., is the defending Super DIRTcar Series champion and he needs some help going into Saturday night’s season finale as he trails Sheppard and Billy Decker in the standings. He did what he could on Thursday night by having a solid effort in his No. 20 Teo Pro Car.

“We are chasing both Billy Decker and Sheppard in the points and we got to perform,” Hearn said. “We got to finish first, second or third and I think I need a little bit of help. We are going to need those guys to finish poorly. We will see what happens tomorrow night.”

Sheppard faded back to finish in third after leading the opening laps of the main-event. The Waterloo, N.Y., star reported that he missed the setup on his Heinke-Baldwin Racing-owned Troyer. He went with the wrong tire compound causing him to fade as the laps clicked off. There was some positive from his third-place effort as he wrestled the point lead back and he now leads Decker unofficially by 20 points heading into the final event of the season for the series. He needs help, though, as a poor qualifying effort put him deep in the field for Saturday night’s finale.

“We had a pretty good car tonight, but we went softer on tires and it pretty much showed because we took off right at the beginning and had nothing at the end,” said Sheppard, a three-time Super DIRTcar Series champion. “It was tough to tell what to do because the track had a funny look to it tonight, something it doesn’t usually have. We just messed up on the tires. We are going to need some serious help tomorrow. I think we start 19th and Billy (Decker) is going to start up front. We got a long way to go if we want to win the championship.”

Oley, Pa., driver Duane Howard drove the Petruska Motorsports No. 66 to a solid fourth place finish in the feature after he started 13th. Howard worked the bottom of the speedway well while moving forward. Tyler Dippel impressed over the final ten laps as the youngster from Wallkill, N.Y., regained multiple spots on the outside of the speedway to complete the top five at the checkered flag.