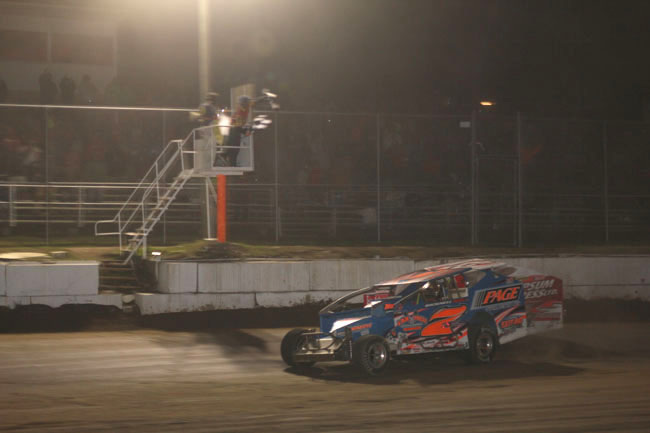 Friesen had stalked Ward, who was looking for his first Big-Block Modified Series points-race win since 2005, from the halfway mark. He twice managed to lead a lap by inches before Ward seemed to have pulled ahead enough to secure the win with his high-side line.

“It was awesome,” Friesen said. “I just had a great car and I got good forward bite driving off the corner. You can always go side by side with Pat. I didn’t want to get into him. I’m thrilled for Mike (car owner Payne). He never gave up on this series.”

Friesen, a former Five Mile Point Speedway champion and a member of the track’s 65 Greatest Drivers all-time list, earned $6,000 for his first Super DIRTcar Series win of the season. He started ninth on the grid in the Honeoye Auto Parts No. 7z. He took over second from Larry Wight on lap 35 and the duel with Ward – including four restarts, was on.

“I was trying to win the race and I went into the third turn too hard, got loose and the let the other guy go by me,” Ward shrugged. “We’re getting better and better every race, but I should have had this one.”

Danny Johnson, who ran in the top five throughout, finished third ahead of Tim Fuller and Billy Pauch Jr. after a lengthy hard-fought battle. Brett Hearn surged late after being spun out and pitting for a tire to finish 6th. Positions 7-10 went to Jimmy Phelps, Wight, pole sitter Mike Mahaney and Peter Britten.

Matt Sheppard and Billy Decker placed 11th and 12th respectively and are now, unofficially, tied atop the Series standings. Sheppard had to pit for a tire himself. Decker struggled much of the night before rallying late in the race.

The racing at the front was superlative from start to finish, while deeper in the field, there was enough contact on the quarter-mile bullring to require 10 yellows in all.

Earlier, Mahaney had won the Pole Position Raceway Fast Time Award and then drew the pole in the Dig Safely NY redraw.