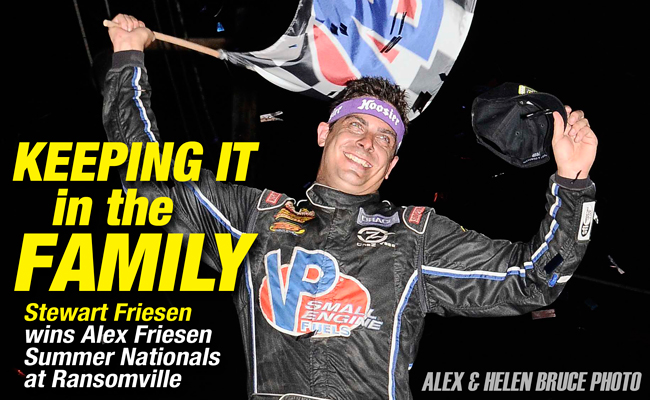 RANSOMVILLE, N.Y. – September 2, 2015 – Stewart Friesen reeled in Tim Fuller with four laps to go and won the Alex Friesen Summer Nationals 100 at Ransomville Speedway after pitting under caution while running second to change a tire on lap 83.

Fuller, the polesitter, led the first 96 laps as heavy attrition from tire wear kept shuffling the field behind him. Pat Ward, along with Fuller one of the few drivers who never pitted, finished third. Erick Rudolph (from 30th) was fourth, followed by Randy Chrysler.

Friesen was driving the Petruska Racing Atlas Paving No. 66. It was his second straight Super Dirtcar Series win and his third of the season.

The final 15 laps were caution-filled as other contenders, including Brett Hearn, Matt Sheppard, Larry Wight, Billy Decker, Jimmy Phelps and Gary Tomkins had tires go down.

“We’ve had some great luck on our side lately,” Friesen said. “Fuller saved his tires great, but this Teo car was phenomenal. This is super special for me. I’ve got to thank my mom and dad for everything along the way, and my uncle and my whole family for everything they put into this place. It’s awesome coming back here.”

Fuller turned his fastest lap of the race on lap 77. “After seeing everyone having trouble, the best thing to do was hold it straight and smooth,” he said. “Stewart Friesen did a great job. He’s got some laps around this place and he really made it exciting for everybody.”

After choosing the high side on two early restarts, Fuller began to opt for the inside. He distanced himself from his closest pursuers, Brett Hearn and Pat Ward, after working hard to put Rich Scagliotta and Peter Britten a lap down and he made a temporary getaway in traffic before Friesen arrived at the halfway mark.

Ryan Susice, running sixth, and Friesen in second, both pitted under the fifth yellow with 17 to go. Five laps later, Friesen was back in the top ten. When Billy Decker slowed with six laps left, Friesen was third on the restart. He shot past Ward on the outside and caught Fuller soon after.

“We run pretty well here,” Ward said. “We pulled a good number. Starting up front (4th) helps. At the end I was torn between trying to put it on to catch Tim or save tire. I rode it out.”