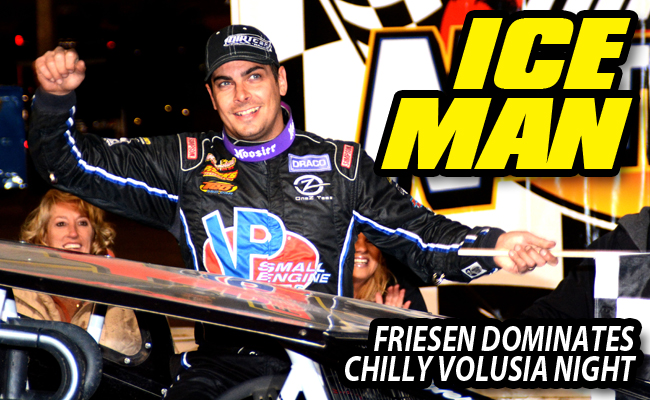 “We had a great race car,” said Friesen, defending Syracuse 200 winner from Sprakers, N.Y. “We worked a lot of bugs out last night and learned a lot of stuff about the speedway. We were able to find that grip there in the middle and just sneak up on there.”

Billy Pauch started on the front row alongside Rick Laubach for the Modified main event. Laubach got the jump at the green putting his No. 7 out in front of the field. He led the first few circuits as Matt Sheppard worked forward from the outside of the second row into the runner-up position. Once there he began stalking Laubach for the lead.

Sheppard worked by Laubach on lap four on the inside of turns three and four to take over the top position. Before another lap could be completed, the caution was displayed for Tim Kerr as he spun in the middle of turn setting up a double-file restart. At the green Sheppard remained the leader while Friesen took his car to the middle lane on the speedway, which allowed him to move from the fourth position into second.

Friesen stalked Sheppard for the next three laps before making his move for the lead. As Sheppard attempted to protect the bottom lane on the speedway, Friesen drove right by him in the middle. Sheppard hung with Friesen for a few laps before he was able to open up the gap on the field.

“After that first start we found it (middle groove) when we fell back to fourth,” Friesen said. “We got up in the middle and got up on top and it started rolling. Matt was on the bottom and we were just able to find that rubber in the center and check out.”

Friesen showed the way at the halfway point as he caught the tail end of the field. He refused to give up the middle lane as he attempted to put cars down a lap. Sheppard, meanwhile, had his hands full with Danny Johnson as well as Tim Fuller right as the caution came out for Wednesday night’s runner-up finisher Anthony Perrego, who stopped at the exit of turn two.

The caution bunched the field and gave everyone another shot at Friesen. He wasted little time after the green flag to expand his gap on the field as he kept his Tom and Roxanne Cullen-owned ride in the middle of the track. Sheppard ran a similar line, but wasn’t good enough to stay with Friesen.

Friesen again checked out on the field. He ran consistently strong lap times allowing him to pull away from Sheppard. They remained in the top two positions as the laps began to wind down. Friesen again fought traffic on lap 23 before the final caution of the race came one lap later as Jimmy Phelps slowed on the speedway. The caution gave Friesen the opportunity to cool down his Hoosier tires.

“When Jimmy (Phelps) stopped there it actually helped me out,” Friesen said. “It let my tires cool off a little bit. We were real good for five or six laps at the beginning of a run before it kind of started to go the other way. It started to push the right front out the longer we went. It really helped us out and let our stuff cool down.”

The race resumed with Friesen holding off Sheppard over the final six laps to score his first win of the 2015 season. Sheppard, who struggled on Wednesday night, was happy to finish in the runner-up position aboard his Heinke-Baldwin Racing-owned car.

“We are getting a lot better,” said Sheppard, of Waterloo, N.Y. “We took off at the drop of the green. The car felt really good, felt really balanced and thought we had a good line there. Stewie (Friesen) went by me around the top so I decided to try it up there. I didn’t realize the track had already started to lock down. Guess if we had moved up there a little sooner we would have had a shot.”

Johnson fought his way back by Wednesday night winner Brett Hearn and Fuller to earn the final spot on the podium with his Chris Gennarelli-owned No. 27J Bicknell.

“I really appreciate this hot rod, it is really fast,” Johnson said. “I think we could have been a hair bit better. We got stuck there behind Laubach on the restart and he was backing up and we couldn’t get going. We are really happy to be here. We’ll try it again tomorrow night.”

Fuller ended up finishing in the fourth spot after he started from the inside of the third row with his Dave Rauscher-owned No. 19 Bicknell. He was followed to the line by Hearn, who worked from ninth to complete the top-five.

Racing returns Friday night at Volusia Speedway Park for the 11th day of the DIRTcar Nationals. Gates open at 5 p.m. and racing begins at 7:30 p.m.