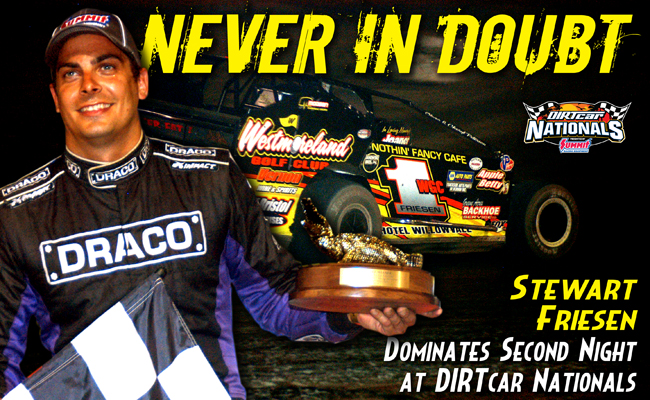 “We were very happy to win tonight,” said Friesen, whose last Super DIRTcar Series victory was the World of Outlaws World Finals finale last November. “We had a great race car.”

Thursday’s win launched Friesen’s event point standing from seventh to second, putting him that much closer to winning the big gator trophy.

Friesen led from the green flag Thursday after winning his heat race and redrawing this first spot on the starting grid. Aussie driver Pete Britten, who gave Haers a run for his money Wednesday but finished seventh, shared the front row with Friesen at the initial start and held on to second as Friesen pulled ahead to lead.

Haers came up third and Billy VanInwegen fourth. Behind them, Billy Pauch, of Frenchtown, N.J., and Mario Clair, of Drummondville, Quebec, were quickly making moves to push their way forward. Pauch passed VanInwegen in lap 1 and by lap 4 Clair was close behind.

As Friesen pulled away from the field in the Tom Cullen No. 1 wcg, the battle between Britten and Haers heated up. Haers closed in on the second place Troyer No. 21a in lap 7, and the two raced side-by-side until Haers pulled ahead in lap 8. Britten quickly learned his lesson and overtook Haers in lap 10.

By lap 11, Friesen was lapping cars and by lap 14 he had put four lapped cars between himself in first and Britten in second. Britten made his way through the traffic, but was no match for Friesen, who darted three-wide between and around cars to stay ahead.

“I think we had a pretty smooth, consistent run going there,” said Britten, who was second at the checkered flag. “Not quite good enough to run down Stewie or anything, but second, we’ll definitely take it.”

The lapped traffic may have been an extra obstacle for Britten, but it was a boon to defending series champion Brett Hearn, who started ninth in the feature. Hearn was able to use lapped cars to his advantage, deftly maneuvering forward and gaining positions. By lap 20, he was in third place, but Britten and Friesen had put too much distance on the rest of the field for him to advance further and the Madsen Motorsports No. 20 finished in third.

“It’s just an awesome race track. We ran all over that thing tonight,” Hearn said. “This is the way that most of us guys like it. It’s just a blast, and if you’re good, you’re going to get near to the front. If you’re not, you go backwards. It was a good strategy for us, a good setup.”

Haers stayed steady in fourth after Hearn took over and, with his win Wednesday, is in the lead in event points. Matt Sheppard, of Waterloo, N.Y., worked his way from 14th to fifth through lapped traffic in the new Heinke-Baldwin Racing No. 9h. Pauch finished sixth, VanInwegen seventh and Clair eighth. Big-Block Modified rookie Anthony Perrego finished ninth. Jimmy Phelps started 11th and finished tenth.