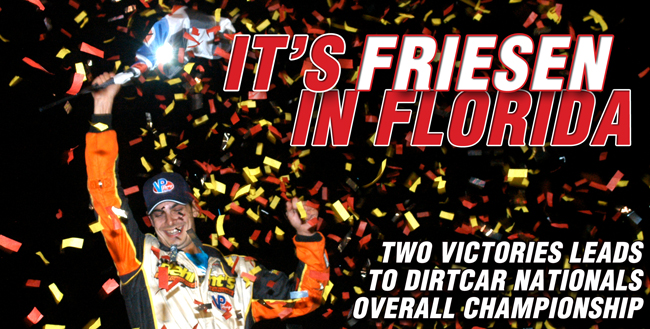 BARBERVILLE, Fla. – Feb. 19, 2011 – Stewart Friesen and Bobby Varin capped off the 40th DIRTcar Nationals by University of Northwestern Ohio on Saturday night with an epic duel that included seven lead changes before Friesen pulled away in traffic to win for the second time during the Super DIRTcar Series Big-Block Modified Florida Tour at Volusia Speedway Park.

Friesen was fastest running through the bottom half of the track all night while Varin put his car on the cushion, leading to side-by-side, edge-of-your-seat racing over the first 39 laps. The two kept swapping the top spot before Friesen weaved his way through traffic with three to go, leaving Varin stuck behind a slower car, and powered to the checkered flag for his second victory in four nights. It also earned him the overall DIRTcar Nationals by UNOH Big-Block Modified championship.

“It was a lot of fun,” said Friesen, of Niagara-on-the-Lake, Ontario, who last fall became the first Canadian to win the Super DIRT Week SEF 200 at Syracuse. “I was like, if I can just hit my marks and do my things right we can at least hold even with him in Turns 3 and 4 and try to make a car length or two in Turns 1 or 2 and then change the line a couple of times in 1 and  2. I changed the line a couple of times in Turns 1 and 2 and I was able to find some good bite on the bottom, that got me to his back bumper and I was able to shoot inside of him and rotate. As soon as I started hitting my marks I was good to go.

“It’s a lot of fun to come down here. The weather has been great. It’s a lot of work, though, too. We’re here working on the car all day long.”

Varin and Friesen race against each other weekly in New York so there are few surprises that either of them can pull on the other.

“Stewie is a pretty good guy to race with,” said Varin, of Sharon Springs, N.Y., who began his week by entering his Modifieds in a beach parade and nearly ended it with a victory at Volusia. “We race against him every Sunday. I kind of know what he’s going to do, he kind of knows what I’m going to do so we can race together pretty good most of the time. It’s been a great week. Unfortunately I think we just messed up on setups every night. I can tell you after the races exactly what we did wrong. It’s no fun to come in second, but it was a hell of a show for the fans.”

It definitely was a thrilling race. Brett Hearn wound up third with Tim Fuller and Rick Laubach rounding out the top five.

“They were just a little bit better through the middle of the corner than us,” said Friday night winner Hearn, of Sussex, N.J. “I was more concerned with falling back because I got back to sixth at one point and then came on strong at the end. This place is just a blast. It’s so much of a thinking track, a setup track. It just makes it really fun. I’m a little sad that we’re done. I wish we were coming back tomorrow.”

For more information on the Super DIRTcar Series, visit http://www.SuperDIRTcarSeries.com, and follow the series on Twitter @SuperDIRTcar.