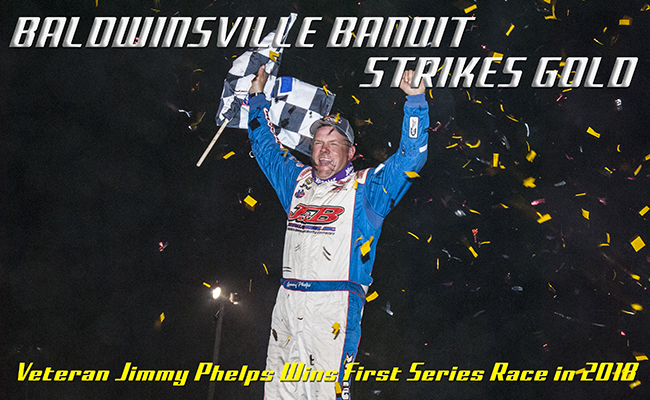 VERNON, NY – July 8, 2018 – The Baldwinsville Bandit Jimmy Phelps struck gold, winning the $6,000 to win Freedom Fighter 100 at Utica-Rome Speedway in front of a tremendous crowd. Race fans witnessed an incredible race as Phelps held off charge after charge from the likes of Stewart Friesen and Danny Johnson. Johnson, coming off his win at Land of Legends Raceway, finished second, and has put a firm stamp on his bid for the overall Series Championship. The bottom step of the podium was filled by Erick Rudolph. He started 13th and made his way up through the field, passing points leader Matt Sheppard late in the 100-lap race.

The drive of the night and KSE Hard-Charger Award winner goes to Phelps’ HBR teammate Max McLaughlin, who started in 19th position after running into problems during his Heat Race. McLaughlin’s Big-Block Modified was fast on the top and bottom side of the race track. The no. 6h flashed by fifteen competitors to secure fourth position.
Jimmy Phelps, who started on the pole, felt he had Lady Luck give him some assistance. “Fortunately, I had good track position. I gotta thank the young lady that pulled that Dig Safely NY 811 hat in the redraw for me. What a car all weekend long. It’s been on rails. I just can’t thank everybody at HBR enough. There’s just a huge list of people that make this happen. It feels good.”

Phelps struggled with lapped traffic: “When it’s your night, it’s your night. The cautions definitely helped me. We were definitely committed to the bottom. I was able to roll around a couple guys in turns one and two in the middle. I just really ventured out there in three and four. Fortunately, I didn’t have to. I was hoping we were good enough to make it happen if we had to.”

This was Phelps’ first Series checkered flag in 2018. “We’ve been on a little bit a dry spell in the win column with the Super DIRTcar Series, so this feels good to get back on track here. Hopefully we can keep it rolling.”

Danny Johnson grabs his second podium finish in two races. “Yeah it was good. Just came up a little bit short. Really ecstatic for my team that we could come up here in a top position. We almost had it, close but no cigar. We could have been a little bit better but maybe next time.”

Erick Rudolph made timely and decisive moves to get there around starting mid-pack. “We started 13th and had a little way to come but we had 100 laps to do it. We’ve got some things to sort out. Congrats to Jimmy and Danny on their top 3 finishes. I didn’t have anything for them but maybe next time we might. Beginning of the race it seemed like it wanted to be on the bottom and then as the race went on it wanted to be elsewhere.”

The Super DIRTcar Series heads for to the Finger Lakes to decide who will be 2018’s Ultimate Outlaw at Outlaw Speedway.