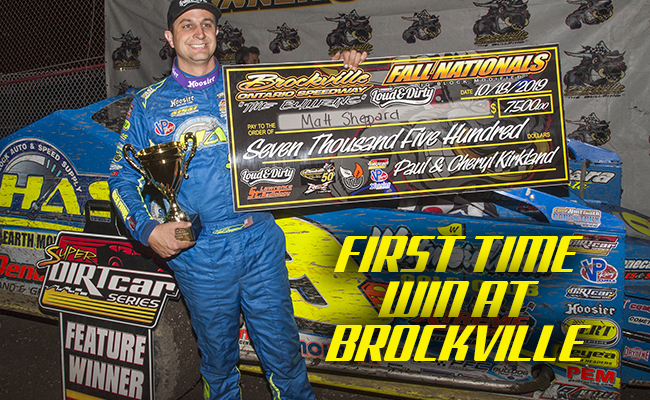 BROCKVILLE, ONT – Defending Series Champion Matt Sheppard’s bucket list just got a little shorter as he took his No. 9S Super DIRTcar Series Big Block Modified to the front for an elusive win at Brockville Ontario Speedway. Rival Larry Wight captured the second step of the podium while Mat Williamson finished third. Sheppard has now retaken the Super DIRTcar Series points lead over Williamson, but only by the slightest margins.

Matt Sheppard took this round in the Championship battle after Williamson got the big NAPA Super DIRT  Week win at Oswego Speedway. Sheppard willed his Big Block to the front from twelfth to pick up his first Series win of his career at Brockville.

“We’ve had a lot of really good runs here but just never came away with a W,” Sheppard said with a grin. “I can’t think of a better time than tonight. This thing was a rocket ship. We just missed the Billy Whittaker Fast-Time Award, we won our Heat Race, and the track was fast and racy tonight.”

“The Bullring” was tacky with multiple lanes, which made for some incredible racing action throughout the field. Sheppard took full advantage.

“It’s not often you start twelfth and go to the front here at Brockville. There was moisture at the bottom. We kept switching around to a bunch of different lanes,” Sheppard described.

Now the Championship points are practically a dead heat with Sheppard holding a slight lead.

“Mat has been good here especially as of late. We’re not going to go down without a fight. We’ll check Brockville off the bucket list and go on to Charlotte.”

In second was Larry Wight with his familiar crimson red Gypsum Racing Big Block Modified. He started in the second row and never fell out of the top three. Wight looked fast but described a struggle with the track and his race car.

“I was in survival mode. We’ll take the second place rather than wrecking the car trying to catch Sheppard,” Wight said.

With the season winding down, we are winding up for the Can-Am World Finals and Wight is ready.

“We are going into the big races with extra points. We gotta gather up everything we can and try to finish off the year on as high a note as we can.”

Mat Williamson finished third and lost the points lead but it’s far from over.

“That was a battle out there. That was probably the toughest race car I’ve ever gotten to a finish. It was tough and I’m just happy to get up on the podium.”

Willamson noted his concern for Rudolph who was involved in a hard wreck in turn one during the Feature. He walked away. “That was a violent flip,” said Williamson.

Jack Lehner, who is running his first full-time season with the Super DIRTcar Series, put in a great Time Trial, took second in his Heat Race, and drew the pole for the 100-lap Feature. Lehner lead past the halfway point but Matt Sheppard jumped him on a restart to grab the lead. Lehner finished fifth which is his best Series finish.

The KSE Hard Charger for the race was Mario Clair who advanced fifteen positions to finish ninth. He used all available racing lanes to get the job done.

Next up is the Can-Am World Finals where Matt Sheppard and Mat Williamson will settle their duel for the 2019 Super DIRTcar Series Championship.